Steven Soderbergh’s “Che” isn’t some stiff, imperial historical bio-pic to be worked over like an all-day, mocha-flavored lollipop. It’s a film that’s lived in, preferring to experience the life of Ernesto “Che” Guevara through procedural busy work above simplified idol worship. A 4 ½ hour excursion into the mind of the revolution leader, “Che” takes an obscene amount of patience to endure, but the reward is a gorgeous expression of a life lived in constant pursuit of political and social ideals, and how that yearn manipulated a visionary into a man of action, eager, for better and worse, to change the world.

Indeed, “Che” holds a positively epic length to best snake around Guevara’s existence and radicalization, using two iconic combat movements during the guerrilla’s life to investigate his headspace during his reign and the collateral damage accumulated when efforts began to return little progress. As much screentime as it takes to trace along this life, “Che” is not a valentine to the man in question, but an observation of warfare and rural persuasion. Soderbergh elects to run alongside Guevara’s army, picking up fragments of behavior and reflection, stewing in the juices of the era while the story occasionally bites down on more routine instances of confrontation and political familiarity. It’s a specialized mood that never reaches a fever pitch, which will surely drive most viewers crazy. Soderbergh is dragging his feet on this picture, leaving the ultimate appeal of “Che” a question of endurance over acceptance.

Divided into two motion pictures (intended as one large canvas), “Che” begins with “The Argentine,” which starts the story off in 1964, when Guevara (Benicio Del Toro), arguably at the apex of his popularity and power, arrived in New York to address the U.N. Using the framework of an interview with journalist Lisa Howard (Julia Ormond), “The Argentine” kicks back to the 1950s, where a young Guevara was being fed stories of revolution, which filled his head with ideas and plans that could change the world, standing alongside friend Fidel Castro (Demian Bichir) as the time came to overthrow the Cuban dictatorship of Fulgencio Batista. Starting off in Castro’s army as a medic, Guevara rose to power and influence as a man of extraordinary vision, creating a jungle community of rebel factions, taking Cuba from whispers to warfare as the years ticked by.

Opening the film with an overture of sorts that details the geography of Cuba (a needed refresher), “The Argentine” reveals itself to be a vaguely romantic account of Guevara’s rise to power. Soderbergh blends Guevara’s iconic (and eventually mass-marketed) posture with the grit of guerrilla combat, utilizing verbalized philosophies of revolution as interstitials, separating the years and the confidence level of Castro’s armies as war swept across the embittered landscape of peasants and young, naive soldiers.

“The Argentine” also exposes Soderbergh’s true aim for his picture: the slow ride of conflict. Overall, “Che” is a glacial mood piece intended to soak up the nuance of life on the battlefield, as Guevara labored to contain his men, using promises of education and fairness to keep peace. Of the two pictures, “The Argentine” is perhaps the liveliest, as it deals most directly with Guevara’s origin of Communist faith and his accumulation of respect as he wins over people from all sides with his ideology and medical knowhow (while facing his own limited lung capacity issues).

Sumptuously photographed with intense naturalistic urges by Soderbergh and evocatively scored by Alberto Iglesias, “Che” transports the viewer to the Cuban revolution without the nuisance of contrived atmosphere or directionless actors. Soderbergh brings out the colors and the passions of the era through stunning minimalism and protracted moments of contemplation, and while it certainly takes its time to arrive at a destination of fate, “The Argentine” is worth the energy invested.

Taking over the second half of “Che” is “Guerrilla,” showcasing Guevara post-Cuba, now setting his sights on Bolivia, realizing a dream of revolution in South America helped generously by his own fame. Trying to mount a similar affront against governmental forces in the name of the poor and weak, Guevara instead tripped over himself, faced with soldiers holding little interest in suffering for the cause and blocked by the tentacles of encroaching American involvement. Again trying to raise up a nation in communal defiance, Guevara found his efforts were failing to take hold, mangling a hard-fought front to overtake the country.

“Guerrilla” is the coarser, more languid picture of the “Che” experience. It fuses to the downward cycle of Guevara, which remains historically accurate, but, coming directly after the enthralling sweep of “The Argentine,” it’s easy to lose some faith in Soderbergh’s ability to obtain a consistent pace to the picture.

“Guerrilla” is much more reliant on Del Toro’s dramatic leadership and the actor commits wholeheartedly to the work, imagining a Che of great passion and profound conscience. Perhaps the depiction won’t placate those who find Guevara a worthless murderer and historical demon, but the burden of judgment never weighs down on Del Toro, or any of the actors for that matter. “Che” depends on the performances to convey the sense of despair and triumph as the revolution endures periods of discontent or achievement, led by Del Toro’s silent conviction as Guevara stomps around, stoking the fires of hope with his intelligence and fervor for change.

“Guerrilla” details Guevara’s downfall, though it’s a fascinating journey marked by deception and instances of American intrusion (permitting a quick cameo by Matt Damon). Bringing the likes of Tamara Bunke (Franka Potente) into the fold, “Guerrilla” becomes something of a dry espionage story, while chronicling the operational mistakes and general populace disinterest encountered by Guevara’s forces, leading to his capture and execution in 1967.

Combined for maximum impact, “Che” is truly marathon storytelling that drives deep into atmospherics to assemble a literal journey for the viewer, eschewing a pure deconstruction of motivations. Even for Soderbergh’s itchy experimental trigger finger, “Che” is an awesome accomplishment of atypical filmmaking scope, burrowing into a multifaceted life lived on the fringes of history. 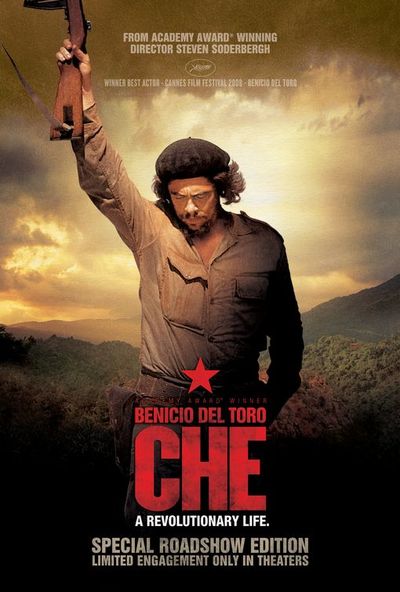