A Bollywood confection making a rare appearance on American shores, “Chandni Chowk to China” is an excellent reason why many of these productions fail to breakout beyond India. A deafening, slapstick-drenched, exaggerated bit of hokum, “Chandni” is an endurance test for the Bollywood uninitiated: a curry-flavored Three Stooges comedy via The Shaw Brothers playbook, with a healthy serving of Stephen Chow thrown in for taste. It’s an attractive bundle, but ultimately a punishing mess of a movie.

Sidhu (Akshay Kumar) is a lowly vegetable chopper looking to change his miserable fortunes on the streets of Chandni Chowk, Delhi. Fate comes calling when Sidhu is mistaken for an ancient Eastern warrior, asked to travel to China to help stop a deadly crime boss named Hojo (Gordon Liu) from ruling the land. Frightened, Sidhu accepts the journey, finding the mythical terrain does nothing to boost his pathetic kung-fu abilities. Caught in the middle of Hojo’s grip, attempting to decipher the mystery between near-identical sisters named Sakhi and Meow Meow (Deepika Padukone), and roughed up under the tutelage of Chiang (Roger Yuan), Sidhu goes from boob to brawler as he begins to accept his destiny and learn the way of the fist.

Touted as the first Bollywood film to shoot in China, “Chandni” takes full advantage of the phenomenal location, arranging finger-snap-tight fight sequences on the hallowed brick of the Great Wall, and taking an interest in classic martial art cinema revenge mechanics to lend this comedy an unusual edge. At the very least, “Chandni” looks magnificent; director Nikhil Advani soaks up the opportunities handed to him to create a larger-than-life feature bursting with expansive locations, diverse special effects, and a cast littered with genre legends.

It’s a crime “Chandni” doesn’t jump off the screen with the same electricity the production is aching to convey. Part of the problem lies in the film’s 155 minute running time, which feels like an entire year once trapped in the thick of the fantasy. Nothing this slight should be allowed by law to pass 80 minutes, but it wouldn’t be lovable Bollywood if it showed concern for pace and hindquarter comfort. Instead, the film spends most of the time drawing out every scene past its expiration date, absurdly stalling to permit “Chandni” an unwelcome epic length. With Kumar tearing around the frame mugging like a lunatic, slipping on banana peels and hoofing it up in the film’s few dance numbers, “Chandni” could pass as a goofball excursion with specific appeal. It comes as a shock when the laughs in the film are smothered at the midway point, when “Chandni” suddenly asks the audience for acceptance as a genuine drama.

Did I miss the point where I was supposed to care about these relentlessly cartoonish characters?

As “Chandni” flails around for what feels like an eternity, indulging Bollywood and martial art staples with gale farce sincerity, the production’s generous spirit is readily available, just not properly timed. “Chandni” is certainly not a disastrous stab at cross-culture entertainment value, but it’s hopelessly bloated to a point of screaming paralysis. 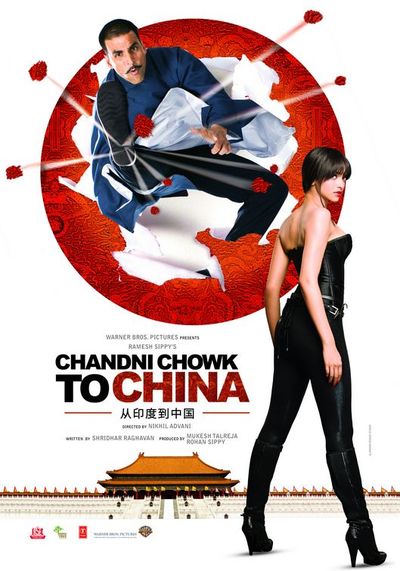 I couldn't agree more. Too much of a good thing is bad. The problem is, when someone in Bollywood hits upon a "good" idea, they think they have the Midas touch then. This movie's downfall is more about the lead hero, and not the movie by itself as much.

Akshay Kumar has been a hilarious action-comedy star over the last 7-odd years; very much in the Adam Sandler-Jackie Chan mix mode. Now, that's not necessarily great or outright bad, but it was good fun. Now, there is no change being offered from him and it's getting montonous watching his brand of comedy and the "loser-next-door-guy-becomes-the-master-of-the-world" spiced up with the Kumar comedy brand.

He's skating on wafer thin ice in terms of his status quo as THE star of Bollywood. Unless he re-invents himself, the downward spiral has begun!

"A Bollywood confection making a rare appearance on American shores"

Actually, no, every major Bollywood blockbuster is released in the same week in theaters in the US, just not by American studios.