Once upon a time Jim Carrey couldn’t tell a lie. Now he can’t stop saying yes to every opportunity that comes his way. Reshuffling a comedy concept a little to the left, “Yes Man” has Carrey trying to reclaim his bygone slapstick glory days, scraping the gunk off his comic timing and sprinting toward low-calorie bellylaughs. The effort is appreciated; however, the film still leaves much to be desired.

A man who has never indulged in a personal adventure, banker Carl (Jim Carrey) prefers to keep to himself, ignoring friends (including Bradley Cooper and Danny Masterson) and co-workers (Rhys Darby, “Flight of the Conchords”) who request his company. When an old acquaintance (John Michael Higgins) urges Carl to take in a seminar on the power of saying yes, the host (Terence Stamp) convinces Carl to change his life. Suddenly agreeing to do anything that comes his way, Carl find his existence transformed, leading him into the arms of Allison (Zooey Deschanel), a bohemian singer/photographer who takes a shine to Carl’s newfound spontaneity.

With the wild days of Ace Ventura and “Dumb and Dumber” long behind him, Jim Carrey has struggled to retain his spark over the last decade, weaving through dramatic endeavors for legitimacy and toplining halfhearted comedies that all tend to fizzle out in the third act. “Yes Man” continues along the same route of middling results for Carrey, only now the concept hits too close to home, with the actor repeating himself to maintain the shine on his box office gold medal.

Directed by Peyton Reed (the likeable “The Break-Up,” the rancid “Down with Love”), “Yes Man” suffers from a severe case of mediocrity, and Carrey fidgets frantically to kick-start the proceedings beyond the heavy chains of formula. The picture actually starts off promisingly by introducing Carl as not a depressed loser, but a gentleman who genuinely doesn’t enjoy the constraints of a social life. It’s an inventive twist on the routine, and Carrey plays around with the anti-social behavior with traditional amusement, keeping Carl something of a jerk, though a kindly jerk. “Yes Man” has a lot of fun with Carl’s public misery, building to the titular moment of universal agreement in pleasingly broad fashion, punctuated by a hilarious supporting role from Stamp as the guru who encourages total submission from the withdrawn man.

Once Carl swallows his negativity, “Yes Man” switches into slapstick overdrive, observing Carl taking on new challenges in language, musicianship, and suicide prevention, not to mention accepting wholly unwanted sexual favors from senior citizens, culminating in a routine gums-only oral sex gag that keeps this film from its rightful home as an ideal family night out at the movies. A shame. The film also makes plenty of space for Carl to woo Allison, taking the hipster on the ride of her life as Reed nudges the material toward a romantic comedy destination. Even with 18 years separating the actors, Carrey and Deschanel share flavorful chemistry, making proper use of the screenplay’s insistence on musical numbers and easily telegraphed eccentricity.

The movie’s midpoint features Carl and Allison heading to Nebraska on a traveling whim, taking in sights such as a telephone museum and a slaughterhouse killing floor (Carl quickly passes out), which takes the film to a wonderful plateau of gentle farce that deepens the central relationship without the need to apply the brakes. Then the brakes are applied, when Carl and Allison return home to find they’ve been mistaken for terrorists. Reed promptly punts the laughs away and “Yes Man” goes from chuckles to stasis as the screenplay lazily hunts for a way to introduce hand-holding meaning to all the laughs. In short: the filmmakers have decided to “Bruce Almighty” the bejesus out of the picture.

Dealing with Carl’s conscience and a tiresome screenwriting formula which specifies romantic entanglements must be dissolved for maximum third-act redemption (preferably with an 80’s rock anthem scoring the moment), “Yes Man” is left devoid of a needed personality. Carrey’s gusto helps to squeeze some pleasure out of the familiarity of it all, but the film hardly satisfies that special need to be slapped around by a comedy. Considering Carrey already mined this material in the aggravating-yet-side-splitting “Liar Liar,” it’s strange to watch the actor fail to achieve funny-bone velocity. Instead, “Yes Man” plays it safe, failing to heed its own message of taking chances. 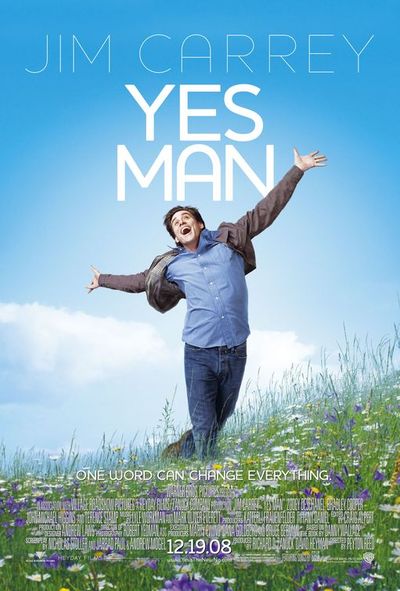