Film Review: While She Was Out

“Desperate Housewives” meets drive-in exploitation cinema in “While She Was Out,” another cringing reminder how the era of true sleaze dried up decades ago. Trying to merge a chase film with little bursts of suburban paranoia, the picture whimpers around, attempting to stall long enough to fulfill a contractual feature-length running time. The goal is achieved, but the movie is a chore to sit through.

Facing an abusive marriage, Della (Kim Basinger) is hoping the Christmas season will bring some peace to her unhappy home. Taking off late one night to pick up items at the local mall, Della finds the parking lot a mess, forced to unleash her note-writing fury on a car taking up two spaces. Later that evening, when returning to her vehicle, Della is accosted by gang of sadistic youth, led by the garrulous Chuckie (Lukas Haas). When a war of words escalates to the murder of a mall security guard, Della takes off into the night, with Chuckie and his boys in hot pursuit.

“While She Was Out” is customary revenge fare made semi-notable because a) Guillermo del Toro was somehow roped into an executive producer role, and b) the picture was written and directed by a woman (Susan Montford), a rare feat within a genre defined by its sexism and gratuitous violence. Adapted from an Edward Bryant short story, “Out” is such a simple creation of brutality, it seems unfair to pick it apart. However, what’s easy to appreciate on the outside is exceptionally monotonous on the inside.

Montford, working almost entirely at night and around nondescript woodsy locations, is eager to manipulate the flavors of suspense as Della stomps around the great outdoors avoiding her would-be captors. “Out” is a film of singular drive, and that’s to see Basinger work herself into a tizzy while the goofball gang of broken twentysomethings torment her. It’s a concept that’s been worked over time and again in cinema history, but rarely does one find such grave miscasting. Surely Basinger is good for some lower-lip-quivering reactions and stuttery cries for divine intervention, but Lukas Haas as the harbinger of Joy Division-fueled doom? I’ve seen gusts of wind with more menace than Haas, an unfortunate fact that seems to elude Montford’s field of vision, as the director continually pushes the actor to butch up with shock value dialogue and some fierce gun wielding. Cursed with a squeaky voice that rarely shuts up (there’s a drinking game in how much Chuckie calls for Della) and a screen presence that’s more Shaggy than Schwarzenegger, Haas is all wrong for the part, and his scenes often dissolve into puddles of unintentional laughter.

The second half summons revenge scenarios, as Della assumes the role of a rabid animal ready to protect her life with all manner of defense, most notably a tire iron shoved through the face of one of the punk kids. Montford tries to thicken the soup with some last-minute insinuation of class warfare and sexual unease, but the damage is irreversible. “While She Was Out” might beg for cheers and gasps, but somehow I see only a chorus of yawns greeting it. 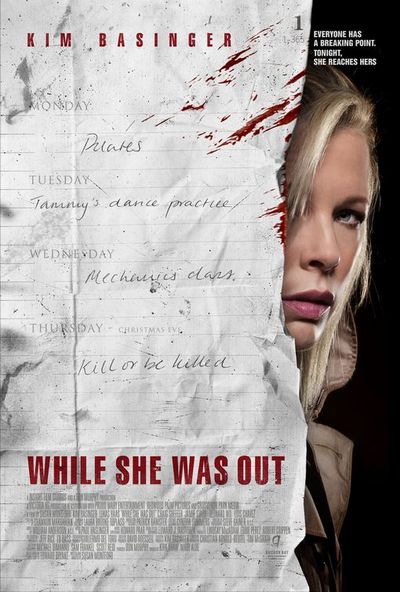