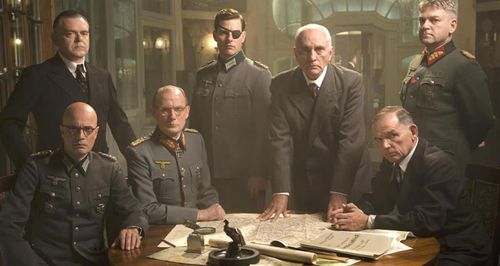 A WWII thriller without the benefit of bullets and cigar-chomping bravery? How dare director Bryan Singer offer such alien delights. “Valkyrie” is a film that perfectly assumes the description of Hitchcockian, for this strange historical piece doesn’t proffer much gung-ho action, instead using an exquisite architecture of suspense as legal tender to persuade audiences to follow what is a rather obscure offering of war-torn German history.

After enduring severe wounds in a North African desert attack, Colonel Claus von Stauffenberg (Tom Cruise) has returned to Nazi Germany with renewed vigor to see the land pried out of the Hitler’s grip. Finding like-minded men in all facets of government (including Terence Stamp, Bill Nighy, Eddie Izzard, Tom Wilkinson, Christian Berkel, and Kenneth Branagh) , Stauffenberg begins to assemble an assassination scheme built around the concept of turning Hitler’s Operation Valkyrie emergency order against him, thus reclaiming Berlin and eventually the country. Armed with bombs, elaborate plans of attack, and whispered national pride, Stauffenberg commences the plot, only to find the task mangled by forces outside of the tight control he demands.

It feels ghoulish to bring up sour industry buzz during a film review, but “Valkyrie” has been beaten up unreasonably over the last year, facing increasing hostility greeting the movement of release dates and trailers that highlighted the bewildering brew of accents meant to embody the frost of the Third Reich. Singer is much too talented a filmmaker to allow the feature to fall prey to outright clumsiness; battling the odds and winning, “Valkyrie” is a smashing success for all involved, while remaining the rare film where traditional blitzkrieg marketing schemes actually hurt the sophisticated workings of the final product.

Written by Christopher McQuarrie and Nathan Alexander, “Valkyrie” doesn’t hold anything fantastical in its back pocket, electing to head down a refined pathway of thriller filmmaking, heavily dependent on lacerating dialogue and stately performances. Singer dives into the material with unexpected zeal, molding the Stauffenberg plot into an eye-catching, jaw-clenching movement of urgency, using the characters as chess pawns on the game board of Germany’s future. There’s nothing ostentatious about Singer’s work here, just a strikingly directed chronicle of misbegotten patriotism, with heavy emphasis on sharply angled Nazi ornamentation, beautifully photographed by Newton Thomas Sigel.

It’s a miracle Singer can bleed any suspense out of “Valkyrie,” considering Hitler’s ultimate fate. However, the picture isn’t built on some careless ultimate twist, but the mechanics of the Stauffenberg plan via a series of near misses to pinch the viewer silly with anxiety. After a sluggish opening act, “Valkyrie” moves to a taut assassination game, using tried and true sequences of misplaced briefcase bombs, military paranoia, and competing bouts of misinformation to manipulate the pressure further. Watching the men attempt to orchestrate the impossible opens the film up to brutal sequences of betrayal and instructional delay, while the script adds a thin layer of emotional resonance as Stauffenberg somberly sends his family (including Carice van Houten, “Black Book”) away to safety, finding the loss consuming his every thought beyond the prized reclamation of his homeland.

Singer is blessed with a regal cast to embody the German conspirators, but the focus of “Valkyrie” must be Tom Cruise. Giving the role of Stauffenberg his habitual intensity, it’s a thrill to watch Cruise stick to Singer’s slow-burn methodology, showing patience with reaction and holding his own against the imposing ensemble. As for the whole accent ordeal, Cruise is just fine sticking to his natural voice for the role. Singer is wise to include a transitory moment from German to English in the first scene, and really, with the rest of the cast speaking with all sorts of accents, Cruise hardly stands out. The characters are established too concretely in fearful Nazi hierarchy to find a kaleidoscope of differing voices the least bit distracting.

When “Valkyrie” starts cooking, it does so with ice-cool subtlety, following the Nazi lead of emotionless response as Stauffenberg’s plan shows signs of unraveling. “Valkyrie” is a contained offering of excitement that would rather wind the audience up with near-misses and double-crosses over fatiguing pyrotechnics. It requires more patience than the average blast of conspiracy, but when it hooks into the filmgoer, the mix of classic thriller tones and Singer’s invigorating compositional rhythms brings “Valkyrie” to an impressive boil. 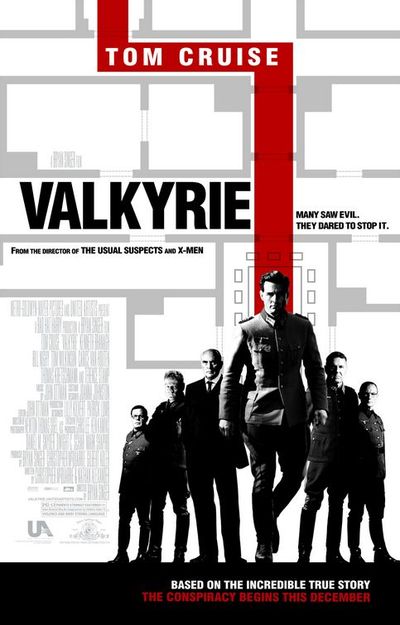 A great film that gave this viewer chills during several climactic scenes. 7/10.
-Mike