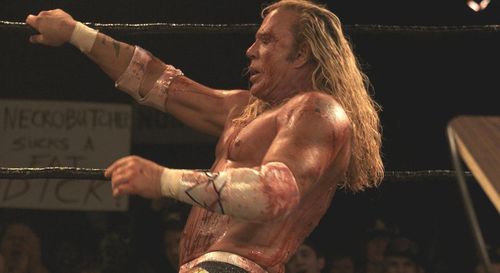 The performance that Mickey Rourke delivers in the remarkable motion picture “The Wrestler” is something that has been passionately mined from deep within the recesses of the spirit. To great delight and unspoken relief, the picture backs up Rourke’s effort to perfection. Certainly not an easy film to absorb with a single bite, “Wrestler” is a pummeling experience of raw intensity and dire futures, orbiting around Rourke and his astonishing pro-wrestling majesty; a splendid presentation of wounded ego within a feature of breathtaking observation.

Desperate to maintain a career as a professional wrestler after watching his golden years during the 1980s pass him by, Randy “The Ram” Robinson (Mickey Rourke) wearily works the East Coast amateur grappler circuit, scraping together a living while putting his body through obscene punishment. Suffering a heart attack after a particularly bloody match, Randy is forced to leave wrestling behind, turning his attention to stripper pal Cassidy (Marisa Tomei) and the lost love of estranged daughter Stephanie (Evan Rachel Wood). Confronting the demise of his only source of glory, Randy struggles to thread together a life of normalcy, while an offer of a wrestling rematch with an old iconic foe keeps his conscience on edge.

After the miracle shot of hereafter conviction found in Darren Aronofsky’s last film, the sci-fi/death’s door love letter “The Fountain,” it’s a thrill to witness the filmmaker challenge himself further with the low-tech grit of “The Wrestler.” Marvelously crafted with humble cinematic tools, “Wrestler” yanks Aronofsky from the heavens back down to Earth. New Jersey, to be specific: a bitter, barren land that’s home to Randy and his twilight years as a former king of the squared circle, reduced to huffing celebrity fumes for gas money.

It’s in this spray-tan-stained world of ramshackle wrestling events where the picture makes its first and greatest impression. Inviting the viewer into the stifling dressing rooms teeming with beefy characters, “Wrestler” captures the oddball comfort level of the men eager to combat in front of a horde of screaming fans. The camera observes the ring routines and storylines worked out with Broadway timing between the men, the body parts tightly taped up, and the camaraderie of the scene enlivened by Randy’s appearance, a scarred vet who is nothing short of a god to these aspiring brawlers. The hive of meticulous backstage activity provides the most critical piece of personality information within the opening act of the film: the kernel of adulation, and how it alternately feeds and hounds Randy’s every last step.

Rourke’s Randy is a fallen star who stubbornly maintains top shape (with help from steroids and assorted black market pharmaceuticals), clinging to his celebrated long blonde hair and tanned body in a bid to keep “The Ram” alive and profitable while facing hearing loss and an increasingly violent vocation. It’s a performance from Rourke that steps beyond mere professional articulation of Robert D. Siegel’s superlative screenplay. There’s not a moment, a single false beat, where the spell of Randy is snapped by contrivance; Rourke’s commitment to embodying this gnarled soul is phenomenal, reaching into a viper’s nest of fallibility to communicate Randy’s humiliating ordeal (including a part-time gig as a deli counter jockey) and mounting fears. Outside of Randy’s frighteningly creased appearance, which is spot on as the archetypal decorated pro-wrestler after decades of substance and pile-driving abuse (think a more bewildered Greg “The Hammer” Valentine), Rourke achieves staggering gravitas during the film with only the slightest of somber glances and boozy defeatist exhales. Hardly a comeback role (his work in “Sin City” was a different kind of wonderful), Rourke nevertheless reinvents himself as an actor capable of soulful, commanding work, willing to suffer a little to attain authenticity.

Verisimilitude is not in short supply throughout Aronofsky’s film. The feature is a front row seat to pain, both in open-wound emotional distress and the kind brought on by a folding chair across the head, not to mention other bloody acts of performance. Staying tight on Randy, Aronofsky is permitted room to create a community of solitude, as the bruised warrior seeks comfort in the arms (or glittery thighs) of Cassidy, a fellow calloused hustler trapped in a professional role she’s long outgrown. The emotions are sparse yet profound, particularly when Randy begins to seek out his daughter Stephanie to silence his guilty conscience. The filmmaking is focused and evocative, honest in setting and auditory bigness (the soundtrack is a hodgepodge of 80’s hair metal); Aronofsky appears to be on an impressive trek to discover his humanistic filmmaking reflexes, and “The Wrestler” is a stupendous achievement of tone and emotional fullness to be pored over long after the end credits roll.

Randy’s rutted road to redemption is marked by horrifying turns of fate, dynamically composed by Aronofsky for striking understated impact. Inspired by the 2000 documentary “Beyond the Mat,” “Wrestler” mines vibrant dramatic gold in the arena of the washed-up wrestling star. Rourke’s eye-popping performance is only one serving of the meal to devour here; a feature of profound feeling and electrifying presence. 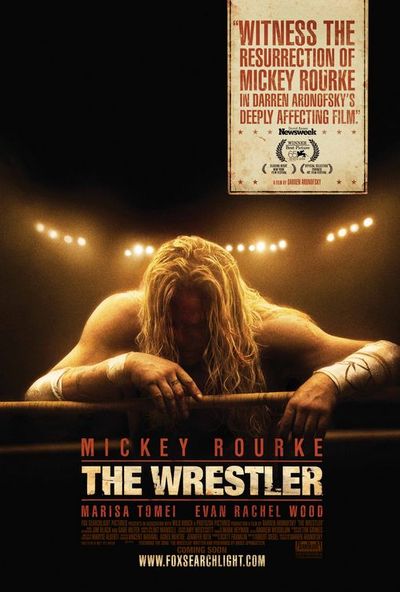