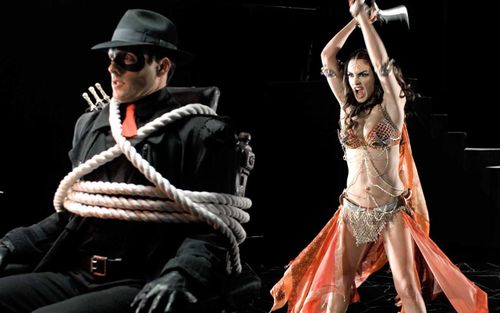 An adaptation of the Will Eisner comic book series that launched over 60 years ago, “The Spirit” has been groomed for big screen dominance by writer/director Frank Miller, himself a legend in the field of graphic novels as well as the co-director of the influential hit “Sin City.” A blissfully coked-out-of-its-mind spit-take on Eisner and the modern world of superhero cinema, “The Spirit” is a wet bag of hot breath slowly released through a monochromatic lens, spending much of its running time reminding the viewer that not every hero needs his own film and perhaps Miller should never be allowed to direct on his own again.

In the dreary, crime-riddled world of Central City lies a protector, The Spirit (Gabrielle Macht). A masked man clad in a black trench coat, red tie, and sneakers, The Spirit surveys the city looking for criminals, haunted by the memory of his true love Sand Saref (Eva Mendes) while waiting for his chance to remove criminal kingpin The Octopus (Samuel L. Jackson) from power. When Saref shows up in town on the prowl for a treasured mythological prize, The Spirit tracks her troublemaking, much to the chagrin of Commissioner Dolan (Dan Laurie) and his daughter Ellen (Sarah Paulson). With The Octopus and partner Silken Floss (Scarlett Johansson) desperate to find a doorway to immortality, The Spirit is sidetracked by Saref and her mysterious ways, leading the hero right into The Octopus’s line of fire.

Using the CG-drenched noir technology that defined “Sin City,” “300,” and “Sky Captain and the World of Tomorrow,” “The Spirit” plays to Miller’s strengths as a brooding, jazzy detective story architect, marked by a hostile mood of blackness only punctuated by colored focal points, mimicking the consistency of a comic book panel. It’s a familiar looking movie in all manner of digital trimmings and two-dimensional gravity, building a Central City peppered with treacherous rooftops and wintry fringes. The cinematography by Bill Pope is clean and inventive when called upon, following Miller’s lead to plaster some striking images of heroism and tongue-biting lust up on the screen. “Spirit” is more fluid than “Sin City” and more visually liberated than “300,” taking Eisner’s world of dames and the damned to fluttery flights of fancy that makes terrific use of the threadbare production value allotted to Miller.

Storywise, “The Spirit” is an incredibly bizarre amalgamation of broad comedy, fist-first action, and quasi sci-fi that bites off more than it can chew. Essentially vomiting his id across the pages of the screenplay, Miller imagines Eisner’s world as a holding pen for flamboyant villains and tarted-up women, vying for The Spirit’s attention in the most direct manner imaginable.

Sure, there’s something of an overcooked plot concerning The Octopus questing to drink magical blood and The Spirit sorting out his past with Saref, but the narrative rides in the back seat when Miller drives. He’s more interested in voluminous derrieres (Saref leaves behind a photocopy of her bottom as a crime scene calling card), heaving bosoms, and sensual attire, brilliantly casting the likes of Mendes, Johansson, Paulson, and Paz Vega (as the belly-dancing assassin Plaster of Paris, no I’m not kidding) as the objects of The Spirit’s desire. Miller adores the softer, rounder highlights of femininity, and the brazen sexuality of the film makes for a great distraction when the nonsense starts to stampede in.

For reasons that aren’t immediately clear, Miller pitches “The Spirit” to the rafters, perhaps hunting for a way to hit a distinct comic book tone, or maybe it just reveals his tone-deaf directorial sensibility. I’m not sure. Either way, the film is a viscous mess, showcasing Miller pushing his actors in the wrong direction with their ludicrous performances and taking in some bewildering comedic off-roading that sours the picture’s modicum of innocent fun immediately. It’s one thing to endure Samuel L. Jackson’s moronic, eye-bulging interpretation of the egg-hating, pimp-emulating Octopus. It’s another thing to have Miller swathe Octopus and Floss in flamboyant Nazi regalia when the villains are bestowed the opportunity to reveal their evil plans. The movie has several of these mildly tasteless asides that really confuse the spirit of “The Spirit.”

While the feature tickles from a frigid technical perspective, it’s a debacle everywhere else, multiplying its ills anytime Miller feels the need to accentuate the whimsy. Going from raised eyebrows to flat-out cringes faster than the speed of sound, “The Spirit” is a maddening motion picture that doesn’t connect on any heroic, sexual, or fanciful level to which it aspires. 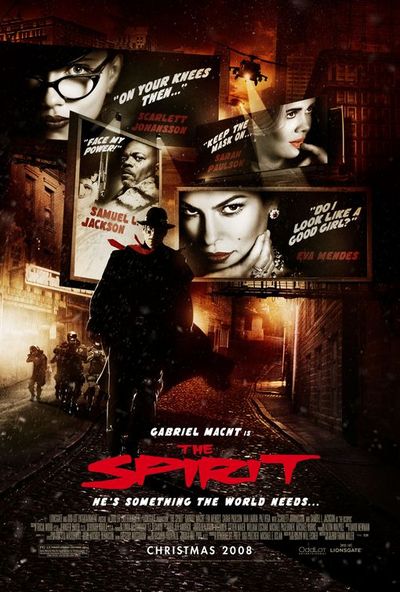