Guilt is what drives “The Reader” to unsettling highs and low of conduct. It’s the essence behind Stephen Daldry’s latest film, his first since 2002’s “The Hours,” and a picture that isn’t easy to deconstruct at first glance. Daldry works the senses and emotions to build a striking sexually charged drama, taking specific interest in the interior of the characters and what compels them to swallow the anguish they obviously desire to expel.

In 1958, 15-year-old Michael (David Kross) is comforted by stranger Hanna (Kate Winslet) when he falls ill in the street. Months later, when returning to Hanna to thank her for her kindness, Michael finds himself attracted to the distant, older woman, and the two begin an affair defined by its passion and Hanna’s insistence that Michael read stories of all genres to her before lovemaking. When the relationship ends abruptly, Michael goes off to law school, finding himself eight years later at a Nazi war crimes trial where Hanna is one of the defendants. Racked with guilt, yet paralyzed to interfere, Michael’s life is again consumed by Hanna, extending into an adulthood (now played by Ralph Fiennes) marked by relentless regret and shame.

Adapted from the novel by Bernhard Schlink, “Reader” sticks close to its literary roots, as Daldry shows patience with his actors and the source material to best extract the precise measured waves of discontent out of the screenplay. “Reader” is methodical, often at the expense of its own pace, but it’s the rare film to get under the skin and explore unsettling themes of accountability and illicit desire, sneaking up on emotions instead of pouring on melodrama by the gallon.

Credit for the restraint lies with Daldry, who avoids most of the traditional button-pushing maneuvering this type of awards-baiting drama typically receives. It’s a harshly observational directorial job, following Michael as his life is distorted by Hanna’s inadvertent psychological invasion, showing the boy introduced to sex and disillusionment during his time with the aloof woman. For the first act, “Reader” is an especially provocative picture, rarely dodging the sexuality that binds the characters together. The effort opens sensuality and vulnerability to the feature in a blunt manner that’s difficult to watch, yet impossible to ignore. Winslet and Kross commit wholeheartedly to their roles, which require substantial nudity and piercing communication of self without the crutch of words. It’s sharp work from the actors, who play into Daldry’s slow-burn design of lustful sorrow magnificently.

The film’s second act takes matters to the courtroom, and while remaining emotionally and historically charged, the intimacy evaporates while matters of darkness roll into view. Hanna’s trial and Michael’s gut-wrenching war of ethics assume center stage, yet the entire movement of this act is hinged on a mammoth personal revelation easily telegraphed by the audience in the first few moments of the film. “Reader” recovers nicely in the final movement, where an adult Michael (played with rich streams of remorse by Fiennes) seizes an opportunity to reconnect with Hanna, though he remains an offering from a distance. Daldry mines a strong response here from David Hare’s screenplay, finding unique communication habits and glimmers of optimism within miles of depression.

“The Reader” is a strong piece of drama that doesn’t pander. It exists in a bubble of misery, though a handsome one with eye-catching locations and moody cinematography to accentuate the trauma. The hypnotic effect may break off now and then, but there remains an unsettling depiction of mournful obsession left behind that satisfies the soul. 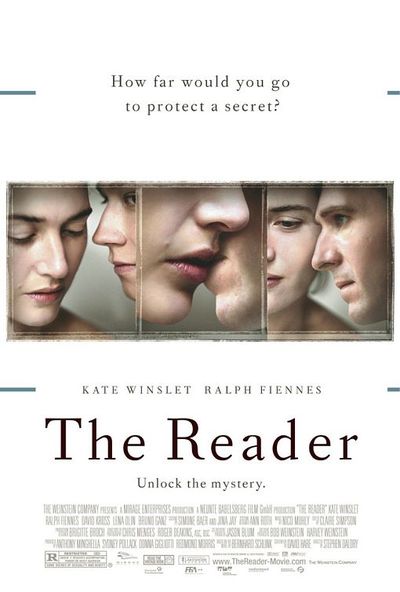