Whatever director David Fincher has been drinking lately, I hope he maintains the habit for the rest of his career. Once the go-to guy for sinister stories dissecting the downfall of humanity, Fincher has found a new path for himself in recent years and “The Curious Case of Benjamin Button” is perhaps his finest achievement as a filmmaker. The picture doesn’t lacerate or gnash its teeth. Instead, it conveys a soul-rattling ache of life that floods the moviegoing veins with storytelling electricity and piercing thematic resonance. I adore Fincher 2.0.

On her death bed in a New Orleans hospital on the eve of Hurricane Katrina’s arrival, Daisy (Cate Blanchett) is comforted by her daughter (Julia Ormond), who reads from a diary written by Benjamin Button. Born in 1918 with the physicality of an elderly man, Benjamin (Brad Pitt) is abandoned by his father, left in the care of Queenie (Taraji P. Henson), who raises the infant inside the comfortable surroundings of a senior citizen home. Aging in reverse, Benjamin sets off on a series of experiences that help inform his conscience, running into Daisy over the years as she blossoms from a curious girl to a brash young ballet dancer. Smitten with Daisy but fearful his condition will overwhelm their love, Benjamin treads softly around her over the course of his life, waiting for the day when their ages will line up perfectly and allow him the one thing he’s always desired, but fate has always refused.

The combined efforts of Fincher, the cast, and screenwriter Eric Roth (who triumphantly warms up the source material from F. Scott Fitzgerald) make “Button” sing is a manner that’s entirely unexpected. The surface suggests “Forrest Gump 2,” indulging a story that sends a submissive soul out into the turbulent world to engage in life-altering, history-observing experiences. However, this is David Fincher, and if there’s any director working today that was born without the instinct to tug mercilessly at heartstrings, it’s this guy.

Frosty tendencies aside, “Button” highlights Fincher’s most dignified direction to date; the helmer works his digital canvas to extraordinary lengths, taking on a gauzy romantic tragedy of sorts with his lauded perfectionism and visual mastery. The wonder of “Button” isn’t found in the demonstrative goo, it’s in the grandeur; the picture chases a tale of long-simmering infatuation without ever nibbling the bait of sugared sentimentality. It’s a love story informed with bewitching bouts of torment, with the cruelty of time grounding the relationship to increase the stakes for Benjamin and Daisy, eventually spilling over to crushing existential concern when matters of awful timing separate the lovers.

Fincher spins his full allotment of plates brilliantly, employing a dreamlike portrayal of New Orleans culture and matters of severe weather to backdrop the story, with cinematographer Claudio Miranda securing a special misted mood of jazzy contentment and foreboding danger in the city that parallels the fragility of the characters. The extra punch provided by the Katrina allegory is all the more welcome. Fincher deftly works in a stunning amount of special effects to embroider the narrative, not only to light up the city, but to accentuate his version of reality. Using makeup and staggering, seamless CG efforts, the character of Benjamin is a piece of manufactured authenticity that slides invisibly into the film. We watch as the man experiences a lifetime from an infantilized old man to an elderly teenager (portions of the trick were achieved by pasting Pitt’s head on the bodies of several actors) and there’s nary a burp of artifice within the entire picture. The rest of the cast also benefits from Greg Cannom’s masterful aging appliances, especially Blanchett, who depicts death’s door immobilization with toe-curling accuracy.

Over 160 riveting, lyrical minutes, Fincher weaves singular magic with “Button,” examining the character as he learns to break taboos with a tattooed tugboat captain (Jared Harris), finds value from an affair with a sophisticated dreamer (Tilda Swinton), and confronts his past when reintroduced to his guilt-ridden father (Jason Flemyng). Benjamin’s introduction to war and pop culture highlights also feed into the shape of the character, but, again, Fincher doesn’t Gump it in the least; “Button” expresses the experience of life as it slowly sweeps across the landscape of humanity. The nooks and crannies of reaction are what the film lusts for, either in the face of massive moments of circumstance or intimate reflections of self. The wear and tear of lives lived on opposite ends of the aging spectrum is gorgeously executed by the leads, with both Pitt and Blanchett tearing into complex roles without succumbing to the strain of melodrama. Even under intricate layers of makeup, the actors portray the crippling relationship with lucidity, dynamically conveying the shattering response to missed opportunities.

“Button” doesn’t hook into the viewer in any obvious manner and stays at arm’s length for the duration of Benjamin and Daisy’s fleeting relationship. Fincher elects to take his film beyond a simple order of tears to a place of soothing progression and inevitability, squeezing the emotion from a challenging pocket of grief. “Button” refuses reassurance to underscore the profound elegiacal movement of life. There may not be the normal, anticipated dosage of sentiment to latch onto in this film, but in exchange for patience and a little faith, “Button” presents the exquisite weight of the human experience in a manner the screen rarely witnesses. 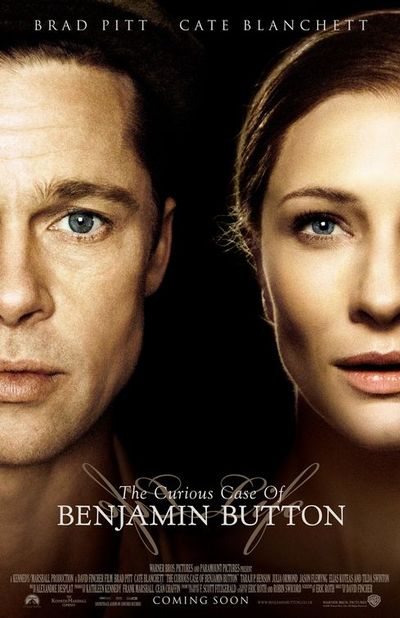 I love the imagination that went into making Benjamin Button... can't help enjoying those southern accents too