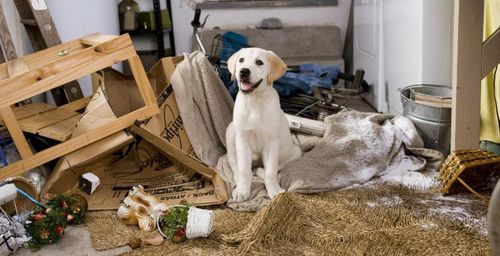 “Marley & Me” isn’t so much an amiable motion picture as it is a series of manipulations kissed by Floridian sun and scored to a 45-year-old accountant’s idea of a “wicked cool” mix CD. With a legion of readers already devoted to John Grogan’s best-selling autobiography, the film has a built in audience ready to weep uncontrollably all over again. However, pull back the intense tear-jerking and layers of sitcom filmmaking, and you’re left with a movie with amazingly little in the way of dramatic nutrition or organic sentiment.

Newlyweds John (Owen Wilson) and Jennifer (Jennifer Aniston) Grogan have relocated to South Florida to start their careers as idealistic newspaper reporters. To help nudge along the dream of a baby in the house, the couple tries on a dog for size, meeting Marley, a feisty Labrador whose energy is perceived as adorable by the new owners. As the years go by, it’s clear Marley can never be tamed, with a daily routine of eating up the house, causing trouble outside, and making life miserable for John and Jennifer. When children start to arrive and relocations take the family across the country, the consistent spark of life is provided by Marley, who soon helps John achieve success as a reluctant columnist.

My one big hesitation with “Marley & Me” is its gummy consistency. Whatever quality that made Grogan’s story such a bookstore mainstay over the last few years hasn’t been translated properly to the screen for this adaptation. “Marley & Me” is a persistently episodic tale of a dog and his madness, but under the guidance of director David Frankel (“The Devil Wears Prada”), the story has been reduced to only a few effective moments where the viewer gets a real sense of Marley and the family as a unit bonding big throughout the years. Frankel and the screenwriters simply pick their favorite Marley moments for maximum adorability or profound canine reaction, turning Grogan’s story from a 13-year-long swell of emotion to an obnoxious, crude series of “dogjinks” where Marley ruins the day with his destructive curiosity and impulsive behavior.

If there was an authentic bond between the Grogans and Marley, the film doesn’t bother solidifying the union. In trying to incorporate John’s professional hesitations as an aspiring hard-nosed journalist (Alan Arkin turns in reliable supporting work as John’s editor), Jennifer’s baby pangs, and Marley’s phobias and frightful neighborhood reputation, the movie liquefies into a series of montages and muffled plot points. Frankel hopes to convey the passing of years in a few short steps, but it comes across as lame wish-fulfillment storytelling after the opening act, where the newspaper reporter can afford a sprawling Pennsylvania estate and Marley takes 15 seconds out of his busy day ruining the world to comfort Jennifer when she miscarries. The movie is hustling too fast to cram all the Grogan highlights into two hours, quickly abandoning any connective tissue. I came out of the picture refusing to believe a single scene of the film occurred in real life, and that’s not the aftertaste “Marley & Me” should leave behind.

Also of great concern is Marley. While branded by John as “the world’s worst dog,” Marley is actually hell on paws, and it’s quite painful to observe the pooch obliterate everything he encounters, especially when the film showcases these antics in the name of “hilarity.” Perhaps dog enthusiasts will eat up scenes where Marley howls endlessly at thunderstorms, shreds every piece of furniture around, and intimidates the neighborhood while Jennifer and John just shrug their shoulders and pat Marley on the head. I couldn’t help but fondly recall the climax of “Old Yeller” during most of Marley’s reign of terror. 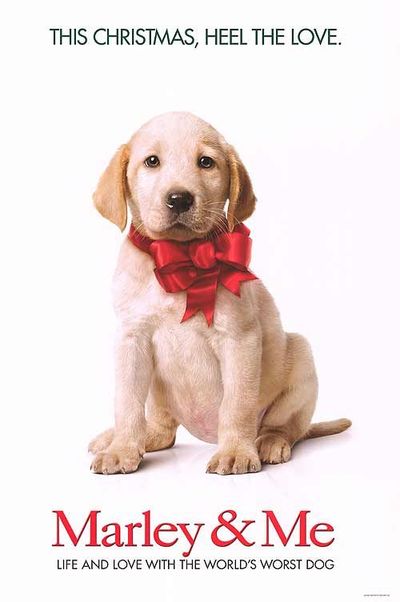 Sorry, but i really don't agree.. I think you were expecting the usual holiday comercial movie, and when you saw 'Marley' you realised that it was only a small portrayal of a marriage and a family.. David Frankel made the option to not overdo the sentimental and the comical in order to make it believable.. I thought the filmmaking wasn't the best, but the performances (including the dogs!) were really strong. Your review is lacking sensitivity to understand the real purpose of the whole movie.

judging by the box office, it looks like Jennifer Aniston is giving Brad Pitt a run for his money...

I took my daughter and a friend to see the movie...they chose "Marley and Me." My parents, husband and I picked "Valkyrie." My movie finished before theirs did and so I slipped in at the last to check on them.

I just happen to catch the gut wrenching part. I had never read the book and so didn't have any expectations.