Perhaps not the most mesmerizing of love stories, “Last Chance Harvey” submits one of the most richly acted illustrations of attraction found this year. A performance showcase for Dustin Hoffman and Emma Thompson, “Harvey” slips into a tranquil mood of burgeoning chemistry, following an unlikely couple not energized by a sitcom screenplay basted in comedic coincidences, but an adult yarn regarding a couple of lonely souls eager to make a connection.

Harvey (Dustin Hoffman) is a frustrated composer of commercial music facing a professional crisis, hoping to keep his job in play while he heads to London for his estranged daughter’s wedding. Upon arrival, Harvey finds himself the odd man out, crushed to see his family has moved on to new lives without him. Ready to return home, Harvey instead finds Kate (Emma Thompson), a droll airport employee who spends her day tending to her widowed mother at the cost of her own love life. When conversation between the two sparks a hesitant friendship, Harvey finds himself so enchanted with Kate that he decides to stick around London, looking to woo his new companion with his peculiar personality. Kate, reluctant to open herself to an American on holiday, is hopelessly drawn to Harvey’s charisma, finding his emotional wounds endearing.

From a narrative standpoint, “Last Chance Harvey” is a conventional piece of romantic pabulum, illuminating the story of two strangers bonding over their shared misery in a somewhat exotic location (to Americans at least). It’s a delight to witness writer/director Joel Hopkins (“Jump Tomorrow”) rise above formula and try to push “Chance” to more nourishing emotional levels of engagement. The picture takes great care with the fragility of the characters, as they maneuver around humiliations in the dating and familial worlds. Using Harvey’s struggle to swallow his obsolescence during his proudest moment of parenthood and Kate’s tolerance with loneliness leads to a combustible, heartbreaking atmosphere for Hopkins to embellish to an agreeable speed. It’s not an edgy offering of direction, but a comfortable one, playing on universal experiences of heartbreak to bond the viewer to the characters.

Watching Hoffman and Thompson bat around these roles is where “Chance” shines the brightest. Two acting veterans making for an unlikely couple (Hoffman loves to play around with the height difference), the pair lend the material the needed grace to succeed, revealing fluid chemistry and a palpable sense of teamwork that gives Hopkins plenty to work with. Both Hoffman and Thompson convey such longing with their performances, making even the slightest infraction of romantic protocol reverberate throughout their body language, communicating raw emotional wounds that have never been permitted to heal. The actors work as romantic pair as well, applying tenets of respect to construct a believable attraction.

It’s to some degree of disappointment that Hopkins pushes “Chance” to romantic movie formula for the final act, maneuvering Harvey and Kate to a break-up-to-make-up stretch of nonsense that’s insulting to the rest of the heartfelt work on display here. Giving in to artifice dilutes the last stand of “Last Chance Harvey,” but doesn’t decimate the sentiment. After all, with Dustin Hoffman and Emma Thompson in command, it would take an Uwe Boll-sized debacle to sour the experience. 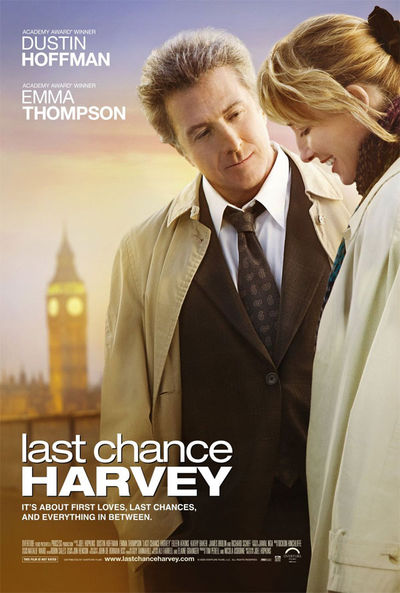