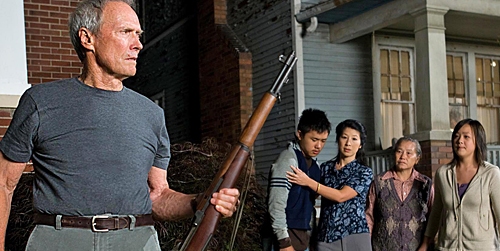 Never the ambassador of understatement, Clint Eastwood fits “Gran Torino” comfortably alongside the rest of his directorial oeuvre. A pleasurably performed character study of racism and redemption, “Torino” doesn’t have much nuance to soothe the demanding filmgoer; the pleasures of the picture emerge from the vigor of the acting and the manner Eastwood sticks to perhaps outdated storytelling techniques to preserve his version of tension.

Walt Kowalski (Clint Eastwood) is a retired Detroit auto mechanic recently widowed, left to tend to his impeccable yard and fend off the selfish needs of his children. Watching his neighborhood, and to a larger extent younger generations, fall into disrepair, Walt has maintained a rich passion for bigotry to keep him company since his dark days in the Korean War. Observing the violent predicament of a young Hmong neighbor boy named Thao (Bee Vang), Walt is compelled to intervene, driving away local gang members and earning the respect of the Hmong community. Finding the culture immediately distasteful, Walt is soon won over by Hmong traditions, befriending Thao with hopes to teach him some self-respect before the gang activity worsens.

The screenplay for “Gran Torino” by Minnesotan Nick Schnek is steeped in textured Midwestern culture, utilizing the discomfort between old-guard military men who refuse to abandon their comfortable domiciles and the melting pot that surrounds them, erecting a human story of tentative respect and the clearing of conscience. It’s not a scholastic take on race relations, but Schnek understands the venomous mentality of men like Walt, who live and breathe outdated American values, only to find their faith rewarded by the degeneration of respect in the youth and the rise of foreign perspectives in their own backyard.

Eastwood plays up Walt’s grotesque behaviors to the hilt. Having lost his beloved wife, dealing with adult children who want to put him in a home, finding his health deteriorating, and now inclined to interfere with an ethnicity he despises, it makes perfect sense for Walt to storm around with a mammoth chip on his shoulder. Eastwood’s growly acting is what holds “Torino” away from the jaws of melodrama, returning to his teeth-clenched, asphalt-voiced roots, as though Walt was an elderly version of Harry Callahan. Spitting out every Asian racial epithet known to man to sell Walt’s calloused exterior, the role finds perfect concert with Eastwood’s specific haggard range, assembling a character of gun-happy action, beer-soaked reflection, and Geritol-fueled defiance that could only be sold by the screen legend.

The majority of “Torino” concerns Walt coming to terms with his new Hmong friends, led by Thao’s sister Sue (Ahney Her, in a lovely, fresh performance), who takes special care to bring Walt out of his shell of calcified hatred. The film’s supreme moments are the ones of Walt finding his footing at Hmong gatherings, failing socialization opportunities, but lovin’ the cooking. The crux of the story belongs to Walt and Thao, born from a thwarted gang-initiation attempt to steal Walt’s prized 1972 Gran Torino, a classic car of immense worth but also a reminder of a simpler life for Walt during his golden factory days. “Torino” doesn’t play the relationship for “Odd Couple” laughs, but more as an unlikely father/son partnership, with Thao learning to better himself through hard work and avoiding the lure of crime. While Vang’s performance lacks polish and range, the relationship remains an engrossing central piece of the “Torino” puzzle.

Eastwood, who’s made a career out of classically mounted simplicity, doesn’t tax “Torino” past obvious declarations of hate and remorse. Walt’s arc is easily telegraphed and predictably resolved, yet “Torino” finds an ease with itself that helps to swallow a few terrible scenes (notably the ones where Walt bonds with his like-minded barber) and Eastwood’s constant underlining of Walt’s spittle-slicked prejudices. The direction is clean enough to move past a few dramatic potholes, though it leads to a conclusion heavy with symbolic intention, perhaps a bit too graceful for comfort.

Unofficially billed as Eastwood’s swan song to acting, “Torino” certainly returns the star to his fist-first roots with extreme satisfaction. The finished film doesn’t quite live up to Eastwood’s typically magnetic screen conduct, but “Gran Torino” isn’t concerned with a wide footprint. It’s a minimal story of redemption, and a fairly successful one at that. 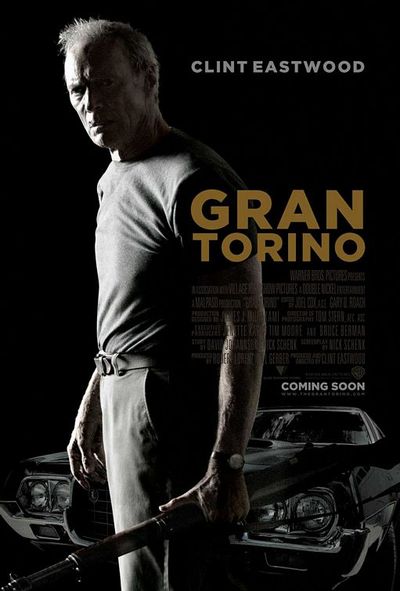