Even in the cluttered battlefield of Academy Award-sniffing dramas, “Doubt” registers as something exceptional. There’s certainly enough dramatic meat to chew on for days after viewing, but the picture is made extraordinary by the performances, which all contain reverberating, harrowing depictions of the title burden. “Doubt” is a magnificent experience all around, but the acting, the gale force wind of top shelf performance, will leave you slack-jawed and hungry for more.

In the fall of 1964, Father Flynn (Philip Seymour Hoffman) is looking to change the face of St. Nicholas Church School, trying to connect with the student body in friendlier, more relatable ways. His actions upset the principal, Sister Aloysius (Meryl Streep), who enjoys keeping peace around the campus with an iron fist. When young Sister James (Amy Adams) comes to Aloysius with concerns about a bond developing between Flynn and the school’s lone African-American child, it pushes the elder nun to accusations of a sexual relationship, without the benefit of proper proof. When Flynn vehemently denies the charges, it leaves Aloysius all the more determined to hunt for a confession, taking the fight to the boy’s mother (Viola Davis), destroying James’s delicate conscience in the process.

After watching the crack timing and superb emotional metering of “Doubt,” it seems impossible to believe writer/director John Patrick Shanley hasn’t helmed his own movie since 1990’s confused ode to the wandering heart, “Joe Versus the Volcano.” Adapted from his award-winning play, “Doubt” represents the other end of Shanley’s range, establishing a severe mood of Catholic authority to unfold a moody piece on the consequences of uncertainty.

Shot with arresting autumnal weight by Roger Deakins (truly exceptional cinematography), “Doubt” generates a suffocating religious grip right away, taking the viewer into St. Nicholas, a church divided, with the line of power drawn only by gender. “Doubt” is streamlined into a single stroke of Aloysius’s fervor to usurp Flynn’s command, with Shanley probing the raw psychological discourse between the parish figures. The material is sparsely plotted, but enthralling, using simple behavioral acts and violent eyes to maneuver the discussion between the characters. “Doubt” asks the simple question, did Flynn truly molest the boy? Shanley employs the obvious hook of curiosity as a rodeo clown to keep the audience pinned to their seats as the screenplay takes a look at the larger picture, addressing the responsibility of power and the struggle of faith. It’s bundled up neatly, but not easily. Shanley is wise enough to keep introducing unease as Aloysius insists herself further into the fray, while Flynn guards his innocence with less authority and more desperation as the film plays out.

With Streep, Adams, and Hoffman in the lead roles, I’m fairly certain Shanley skipped to work each and every day. To say the acting in “Doubt” is wonderful could be perceived as an insult; the work is perfection, with the cast interacting spotlessly, building a triangle of torment hooked into the fangs of Catholicism. The roles play to the actors’ strengths: Adams twirling wide-eyed innocence around; Hoffman digging into ingratiating period-specific church demeanor and bellowing sermonizing; and Streep peering judgmentally from her bitter pink eyes, her body encased tightly in a constricting habit. The cast makes the running time fly by with their spellbinding social combat (launching verbal precision courtesy of Shanley), extending to Davis, who makes a poignant splash in her one and only scene.

Watching the actors bat around Shanley’s dialogue, bringing the dramatic kettle to boil as Aloysius makes her move to destroy Flynn, takes “Doubt” to a place of intimidation and classic suspense, yet the lasting effect of the film is found in the final stages of soul-quaking remorse. A beautiful machine of dramatics, “Doubt” entices with imposing actorly sway, yet leaves behind a resounding thematic residue that doesn’t wash away. 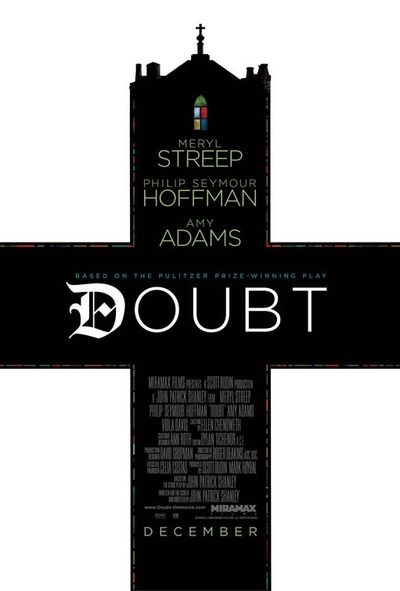 "A beautiful machine of dramatics, 'Doubt' entices with imposing actorly sway, yet leaves behind a resounding thematic residue that doesn't wash away."