Jews kicking ass. The boys of “Knocked Up” would adore this movie. Actually, “Defiance” has a little more on its plate than simple heroics, but the violence, the sheer aggression, is one of the lone qualities that separate this Edward Zwick film from the average television movie. A respectable shot at a Holocaust story with uplifting qualities and plump moral questioning, “Defiance” is a handsome production, just not an especially inspiring one.

In the midst of World War II, while the Nazis sweep across Poland, brothers Tuvia (Daniel Craig), Zus (Live Schreiber), and Asael Beilski (Jamie Bell) escape the slaughter, taking refuge in the nearby forests they’ve grown up in. Stumbling upon other refugees, the brothers set up a camp of sorts, helping to protect and feed the wide range of personalities and temperaments assembled. When word spreads of the “Beilski Partisans” army, more seek out the camp, creating a divide in leadership between Tuvia, who wants peace, and Zus, who craves Nazi blood. As the seasons change, the Beilskis are tested daily by the hardships of starvation and enemy patrol, hoping to outlast the war without losing their humanity.

“Defiance” is a significant tale of preservation during bleak times, twisting around the true story of the Beilskis to fit a war movie structure that rewards patience with displays of fist-clenching violence not typically associated with Holocaust stories. Perhaps this is Zwick’s way to lure viewers to his picture, since there’s little else here worth paying attention to, at least within a theatrical environment.

Paying close attention to the eroding bond of the Beilskis when the war pushes them to the edge, “Defiance” finds a wide variety of psychological shades to investigate, particularly in the early going, when the boys learn the fate of loved ones left behind. The cast appears invested in their roles, burrowing into the pain with performance relish, yet Zwick lets them all down by taking a bothersome ham-fisted approach to the story, turning gut-churning internalization of guilt into broad sweeps of melodrama the film could do without. Not only does it sugarcoat the tension, but it needlessly fattens up an already overlong film (135 minutes) with distracting dramatic simplicity better suited for the small screen.

The second half of “Defiance” brings divide, with Zus off to join a band of Russian soldiers and Tuvia battling the strain of leadership and waves of illness. Zwick communicates the passage of time and the burden of separation wonderfully, as the film paints a strong portrait of discontent within the camp, with some of the residents even requesting passage back into the ghettos for safety. When “Defiance” isn’t trying to buff out motivation with bloated dialogue, it’s quite successful observing brutal wartime suffering, balancing out the bleakness of history with extended scenes of Jewish compassion and bickering community interaction. Zwick is best with small moments, but there’s precious little intimacy sprinkled around “Defiance” to savor.

Layering in a surprising amount of chase (effectively turning Tuvia into a Moses-like character) and bullet-happy combat sequences to showcase the tenacity of the Bielskis, “Defiance” keeps its blood boiling right to the end. While the flood of temper and R-rated vengeance is unique to behold, “Defiance” fails to solidify as an engrossing, emotionally debilitating motion picture. I’m positive it will enjoy a long and fruitful life on DVD, where it belongs. 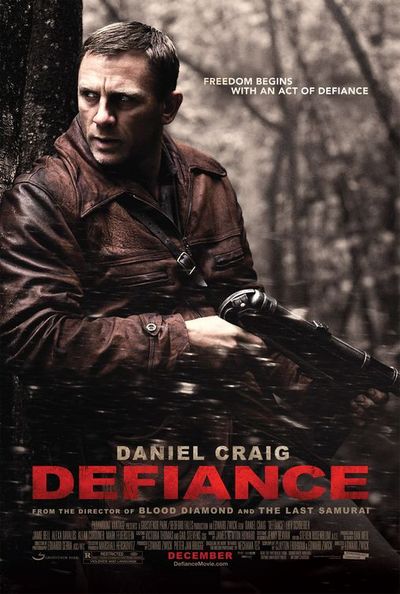 Be one of the first to play the Defiance shooting game at the defiancemovie.com/rifletraining & show off your shooting ability to reach and high score and win tickets to the premiere of Defiance.

I thought "Defiance," might be good from the trailers...too bad.
-Mike