Taking time out of his hectic PG-13 schedule to make a flick for the kiddies, Adam Sandler tones down his act a smidge for the Disney film experience, “Bedtime Stories.” Only six months ago Sandler was try to ease Middle East tensions and enjoy sex with Lanie Kazan in “You Don’t Mess with the Zohan,” and now it’s all bug-eye guinea pigs, gumball storms, and Buzz Lightyear cameos. Even if you hold distaste for Sandler’s juvenile antics, I think some credit has to be given for his recent interest in versatility.

Left to care for his niece and nephew while his sister (Courtney Cox) is away on a job hunt, Skeeter (Adam Sandler) finds he has little in common with the kids, and even less with fellow caretaker Jill (Keri Russell). Enticing the children with wild bedtime stories, Skeeter dreams up faraway lands of enchantment where his make-believe surrogate enjoys the spoils of war. However, the children keep their uncle grounded by including punishments and failure for Skeeter and his massive imagination. When the bedtime story embellishments start to show up in the real world, Skeeter finds he’s unlocked a gold mine, trying to convince the kids to help him with money, women, and a chance to snatch a promotion away from his hotel workplace rival Kendall (Guy Pearce, enjoying the change of pace).

If one accepts that “Bedtime Stories” is strictly for family audiences, it’s great deal easier to embrace the film as a tempered, but amiable offering from Sandler, reaching out directly to the nosepickers this holiday season to expand his fanbase. A lavish fantasy/comedy, “Stories” is a routine tale of underdog success and childlike wonder, putting Sandler’s ease with youngsters to good use as our hero is sent on several imaginary missions to experiment with the magical results.

Following Skeeter into western, sci-fi, gladiatorial, and medieval “chapters” of the bedtime story allows Sandler sizable room to flex his goofball muscles. More at ease in front of the camera than I’ve ever seen him, Sandler appears to enjoy the comfy PG surroundings, permitted to employ fart jokes, booger monsters, and the aforementioned ocularly challenged guinea pig to help bring the movie to a child’s level. The dumbing down of the material isn’t an inspiring sight, but Sandler’s charm always saves the script from its worst tendencies, especially when he’s allowed a moment to spin jokes his own specialized absurd way.

At 95 minutes, “Stories” stalls to stretch itself out. It’s a thin concept and director Adam Shankman doesn’t grip the promise of the material with optimal fervor, instead letting dull asides with the formula stuff (Kendall’s deceptions, flirtations with Jill) lead the way over uproarious eccentricity. Thankfully, appearances from the “The Sandler Players” such as Alan Covert, Rob Schneider (playing a Native American), Nick Swardson, and Jonathan Loughran help extend the strangeness, while supporting work from Russell Brand (as Skeeter’s best friend) reveals a refreshingly silly new side to his comedic gifts.

“Stories” is more harmless merriment than hilarity, and I give Shankman credit for never swallowing the picture in special effects, employing the ornamentation wisely around the film in a manner that furthers the fantasy vibe. However, Sandler’s mischievous heart just doesn’t belong in a straight-up kid zone like “Bedtime Stories,” especially one with a script that doesn’t elevate beyond the expected. 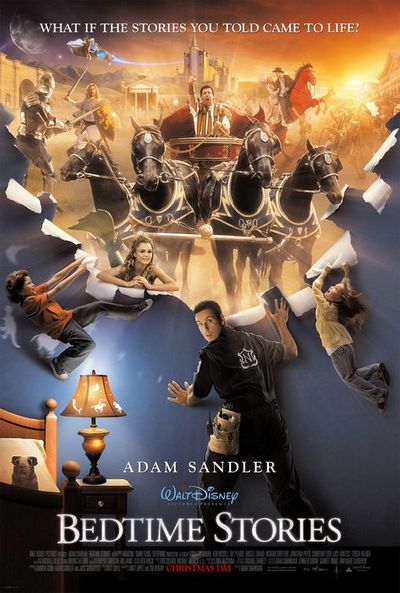