Entering a cluttered marketplace of World War II-era Holocaust tales (joining “Good,” “Defiance,” “The Reader,” and “The Boy in the Striped Pajamas”), “Adam Resurrected” does enjoy the novelty of being the strangest film of the pack. A haunting, yet decidedly off-putting odyssey of psychological meltdown and crippling grief, “Resurrection” is built on a foundation of shocking dehumanization, yet doesn’t have the sense to pull back and let the images sink in organically.

Adam Stein (Jeff Goldblum) was a clownish nightclub performer in Berlin during the 1930s, working the crowds with his routines of magic and comedy with the help of his growing family. When Nazi rule was declared throughout the land, Adam was sent to a work camp under the strict control of Commander Klein (Willem Dafoe), who turned Adam into a literal lapdog, forcing the performer to scrape across the floor as his pet. Years later, Adam is returned to an Israeli mental hospital to work on his psychological issues, mingling with other Holocaust survivors of fractured mental hold, meeting Davey (Tudor Rapiteanu), a feral boy who he takes under his wing.

Director Paul Schrader (a man always willing to explore those cramped, suffocating parts of the soul) shows little in the way of restraint with “Resurrected,” exploring the title character’s frantic mission of madness with almost perverse attention to the detail of humiliation. An adaptation of the Yorum Kaniuk novel, “Resurrection” is a comprehensive display of mania, rooted in Adam’s frantic state of mind, tempered only by alcohol, sexual distraction with a nurse (Ayelet Zurer), and a like-minded canine manifestation of anguish found in Davey.

The bondage of guilt is woven throughout “Resurrected,” often literally at times as Schrader brings out a multitude of iron chain imagery. With the drama moving back and forth between Adam’s mental ward hijinks and his devastating camp experience, the film conjures up quite an evocative portrayal of misery, embellished further by Goldblum’s agitated performance. Schrader can only bring the film so far before the drama begins to erode, leaving Goldblum to pick up and balance the gravity of the situation when required.

It’s easy to embrace the spectacle of Goldblum prancing around the frame, blending the instincts of a clown with the heavy heart of a Holocaust survivor. Playing a man employed to entertain Jews on the way to the Nazi ovens (though don’t mistake “Resurrected” for “The Day the Clown Cried”), Goldblum latches onto the primal fear of the character, giving the role an interesting quaking quality. However, it’s still Jeff Goldblum under the veneer of despair, emphasizing his now-legendary acting mannerisms to cartoonish lengths. Goldblum never loses himself in the role, which severs whatever cathartic qualities Schrader is on the prowl to explore. It’s an animated performance, but never a profound one, much too self-conscious to hold the viewer tightly as the plot parades around some extreme displays of behavior, most emerging from a constipated theme of submission.

As “Resurrection” steams toward a conclusion, matters simply squirm out of focus, with Schrader taking a few emotional shortcuts to find an end to this claustrophobic film. “Adam Resurrected” definitely has moments of horror that stick out as remarkable, yet the conclusion of the film conveys a sense of moderate relief over life-altering transformation, shortchanging the miracle Goldblum is working overtime to achieve. 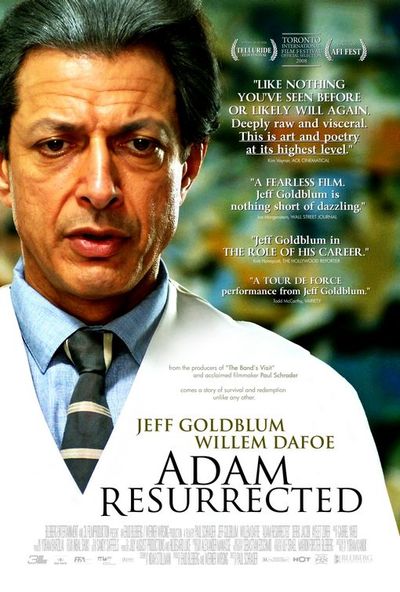