Film Review: The Tale of Despereaux

“The Tale of Despereaux” is actually quite a misleading title. There’s so much oddity floating around this misguided film, it leaves little room for our hero to accomplish anything worthy of sole title ownership. He’s rendered a footnote in a cluttered fairy tale yearning for a sense of whimsy, only to conjure great bewilderment instead.

Despereaux (voiced by Matthew Broderick) is a tiny mouse with huge ears and a tireless sense of curiosity. Enchanted by stories of King Arthur, Despereaux is hungry for adventure, much to the dismay of his fellow mice, who take great honor in fear. Befriending Princess Pea (Emma Watson) of the kingdom of Dor, the mouse tastes regality for the first time and loves it, only to find his community banishing him for his individuality, sending Despereaux to a life lived with the rats. One of those vermin is Roscuro (Dustin Hoffman), a former pirate who sent Dor into despair when he ruined the local soup festival, unintentionally killing the queen. Hoping to make amends with Princess Pea for his unfortunate actions, Roscuro is instead pushed to treachery, using a dim-witted servant named Miggery Sow (Tracey Ullman) to help carry out his deception.

If the synopsis above comes across a little confused, it’s only a mere reflection of the erratic behavior “Tale” displays. Adapted from the award-winning book by Kate DiCamillo, “Tale” is a sprawling story of honor, forgiveness, and soup compacted poorly by filmmakers Sam Fell and Robert Stevehagen, who eyeball an elusive tone of irreverence and sentimentality, but can’t pin down a point of view. Gary Ross’s screenplay is also blur of motives and characters, all fighting for screentime in a manner that shreds the picture’s enthusiasm.

Softened and pulled apart by the production team, “Tale” has been reworked into something friendlier than DiCamillio’s book suggests (no tail-chopping punishment here). Struggling to divide the story between Despereaux, Roscuro, and Miggery Sow, the picture sprints in three opposite directions, with little connective tissue to elevate the emotions beyond family film convention. Despereaux is a cute character with wonderful literary desire and admirable heroism, but he disappears for far too long during the film, leaving his character arc in shambles. Miggery is a baffling blend of irritation and innocence; a dreamer left to rot in her miserable life. And Roscuro is a sad sack turned vengeful, making motivational leaps the film never fully fleshes out.

The whole soup angle is also left frustratingly fragmentary. “Tale” takes on the oddity of Dor and their soup fetish (rats and cooking…where have I seen this before), but the payoff includes an appearance by a sassmouthed spirit made up of vegetables, employed by the head chef (Kevin Kline) to inspire recipes. Perhaps this aside made more sense on the page. As viewed in the film, it resembles a mescaline-tainted nightmare.

I enjoyed the exaggerated human animation in “Tale,” with Miggery’s myriad of facial reactions a thing of beauty. The film is competently assembled from a technical standpoint, achieving a storybook glow without the burden of parody. “Tale” also brings together an impressive voice cast (William H. Macy, Sigourney Weaver, Robbie Coltrane, Ciaran Hinds, Christopher Lloyd, and Stanley Tucci) to beautify the characterization. It’s frustrating to watch “Tale” flounder as much as it does, but when the filmmakers don’t seem particularly comfortable with the source material, it doesn’t invite the viewer inside to experience any potential magic. 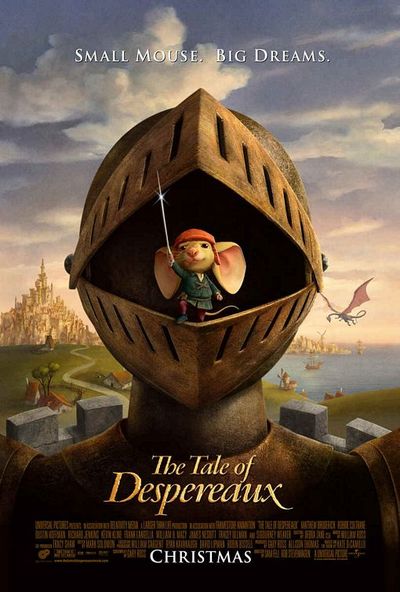 I do not remember the "sassmouthed spirit made up of vegetables" and i just got done listening to the book so maybe it was invented for the movie.

The book was really three stories whose protagonists met and a fourth stores came from that. I was wondering if the movie would be broken up the same or if they would try to tell the first three stories together so the watcher would not forget the other stories. Unfortunately they seem to tell them separate which works in the book buy maybe not so in film.