Moving from Phoenix to remote Forks, Washington, Bella (Kristen Stewart, “The Messengers”) has quickly found a focal point for her high school awkwardness: Edward Cullen (Robert Pattinson, “Harry Potter and the Goblet of Fire”). A pasty loner with severe social issues, Edward is a mystery to the swooning Bella, leaving the teen girl hopelessly in love with an enigma. When bodies start to pile up in surround counties and Edward saves Bella from certain death, it comes time for the strange boy to reveal the truth: he’s a vampire and Bella is his true love. As the duo work around their extraordinary relationship issues, trouble arrives in the form of a rival vampire clan, cursed with James (the woefully insipid Cam Gigandet, “Never Back Down”), a tracker who will not stop until Bella is dead.

I know I’m skating on thin ice to bring any note of condemnation to a franchise that has built a mighty tower of adoration from readers across the globe; author Stephenie Meyer’s world of vampires, unrequited sexual thirst, and self-conscious teen emoting has resulted in semi-Potteresque hysteria, extending to the release of this first feature film. However deafening the hype, I found “Twilight” to be a rotten movie, yet the blame for the failure of this tween sleeping pill doesn’t completely point toward Meyer’s imagination, but Hardwicke’s thundering screen cluelessness instead.

After a misfire (“The Nativity Story”) and two outright creative fiascos (“Lords of Dogtown” and “Thirteen”), what brought the producers to Hardwicke’s doorstep to direct “Twilight” is a mystery for the ages. I’m sure her time spent with young actors was a major consideration, but a film of this scope and sensual edge needed someone capable of communicating thick torrents of bodice-ripper romance and dark, violent tones, blended together to create a magical arena for the characters to work out their Northwestern angst. In place of challenging gloom, Hardwicke gives the material an inflated ABC Family Original treatment, draining the life out of “Twilight” through her sheer inexperience with fantasy and horror. Would you give an all-powerful fantasy franchise capable to producing hundreds of millions of box office dollars to a woman who once bungled the softball story of the Virgin Mary?

Shabbily edited and suffering from Hardwicke’s compositional ineptitude, “Twilight” is reduced to a poorly contained unintentional joke. With shirtless vampires running around at Superman speed, Edward rocking goofy Johnny Suede hair, and the picture offering perhaps the worst display of parental indifference I’ve ever seen, “Twilight” is riddled with secretive passages meant only for lovers of the source material. To the outsider, the whole experience alternates between embarrassing overindulgence and outright boredom, watching a promising concept for teen “Romeo and Juliet” style escapism turn into big screen triviality, with a horde of dreadful actors (Stewart is celebrating her eighth straight year of playing the exact same stuttery, awkward character) and Hardwicke trying to pull together everlasting love with extremely limited artistic means.

“Twilight” doesn’t play by standard vampire rules, so ingrained bloodsucker cinema logic is thrown out the window when processing Meyers’s pensive creation, as are most concepts of spatial relationships, motivations, and romantic chemistry (sorry folks, but I’ve seen siblings with more sexual heat than Bella and Edward). “Twilight” just dances where it wants to, assuming most of the audience is filling in the blanks on their own. It makes for an exhaustively moronic final act, where the entire cast suddenly pinballs around the country with minimal explanation, just to arrive at a mirror-filled final vampire showdown location straight out of the directing 101 handbook. Surely the vampires are a more complex bunch than what Hardwicke presents here...at least I hope so. I’ve never read the “Twilight” books, and if this film is any indication of their treehouse substance and foul whimsy, I have no interest in starting now.

Even with something as labyrinthine as the “Harry Potter” series, there’s an effort from the producers, however effective or ineffective, to include everyone in on the adventure. I never felt the same invitation with “Twilight,” watching Hardwicke stumble hopelessly around the material, making sure the basics, no matter how clumsy they fit into the overall visual scheme of the movie, are accounted for. Encountering vampires with diamond skin in the daylight, impromptu thunderstorm baseball games, and creepy undead boyfriends who show little regard for matters of nighttime privacy, it’s clear “Twilight” is an invitation-only experience, and should elicit the appropriate squeals from the core demographic.

Outside of the indoctrinated, it’s a toss-up how this movie will play with the masses, but I have to assume a full two hour blast of traditional Hardwicke blunders and head-slapping “romantic” lines such as “You are exactly my brand of heroin” (huh?) will snap even the most devoted of multiplex wills. 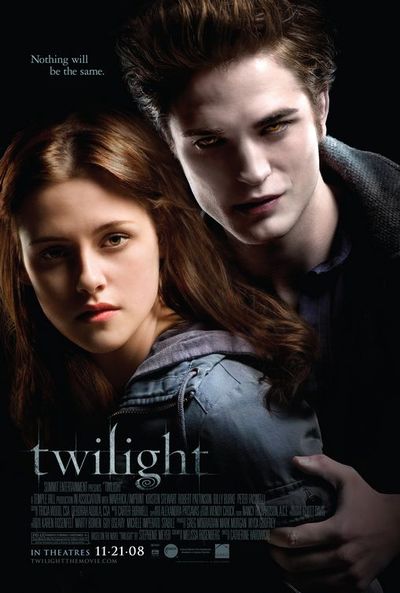 The movie arose from the book phenom, like Harry Potter. Unlike Potter the writer hasn't had 10 years to develope her characters.

After you read the book you'll understand and really enjoy the movie. If you don't, go watch something else. How easy is that?