When Frank (Jason Statham) makes a rare pass on a delivery job, his recommendation for a replacement is quickly killed by villain Johnson (Robert Knepper, “Prison Break”) when results are not met to satisfaction. This forces Frank back into play, now with a bomb strapped to his wrist triggered if he steps more than 75 feet away from his trusted automobile; Johnson sends the delivery man to Budapest, with special cargo in the form of Valentina (Natalya Rudakova), a Ukrainian party girl who plays a specific role in Johnson’s plans for terror. Literally unable to leave his car, Frank hits the road with his unwelcome partner, looking to formulate a plan to ditch the death bracelet and thwart Johnson’s scheme.

Under the guidance of the hilariously named director Olivier Megaton, “Transporter 3” doesn’t reboot the series, it just straightens its posture, returning Frank to the vaguely gritty origins of the first installment. With a more monochromatic visual design, emphasis on hand-to-hand combat (Frank has not one, but two encounters with a roomful of bad guys), sluggish car stunts, and a script that spends more time chatting than pummeling, it’s clear the writers wanted to bring Frank back down to reality. I remain unconvinced this is where he should rightfully be.

The repetitive action sequences (Corey Yuen, clearly having an off day, returns to choreograph), rob “Transporter 3” of its rightful giddiness, but that’s only if you can actually distinguish what’s going on. To compete in today’s marketplace, Megaton crams all the stunts into the Confuse-O-Tron 9000 editing application and allows the cuts to do all the talking, making stretches of the film impossible to appreciate. The cutting is so repellent, it looks as though Frank is teleporting himself around the frame instead of offering any type of natural movement. I also wasn’t delighted with Frank’s newfound sensitive side, unlocked by Valentina through the most inane dialogue imaginable (they have lengthy discussions about food), culminating in a cliffside seduction sequence where the actors are clearly freezing and uncomfortable, emphasizing the lack of chemistry between the leads further. “Transporter 3” is ostensibly about Frank breaking his rules for love; however, after a gander at Rudakova’s excruciating performance (which incorporates pill popping and public urination…sexy!), one may wonder why Frank just doesn’t detonate the wristbomb himself.

An inspired baddie performance from Knepper livens up the movie to a certain degree, and Megaton does squeeze in a sharply conceived bit where Frank frantically chases his stolen car on a bicycle (at least I think it was a bike…the editing is so insane, Frank could’ve been riding a broom for all I know). Still, the thrill has been effectively amputated from the franchise, diminishing Frank to a banal action figure instead of a guilty pleasure. 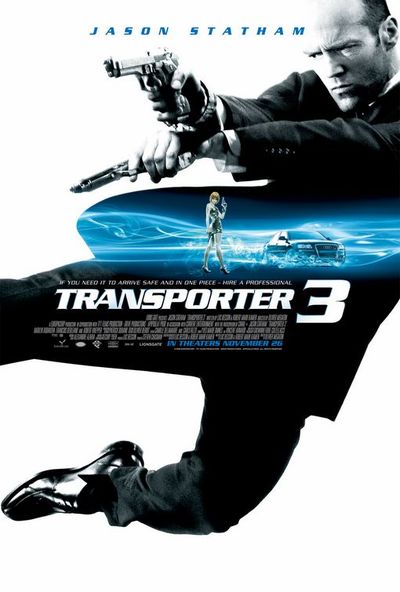