As 1970’s R&B sensation The Real Deal, Louis (Samuel L. Jackson) and Floyd (Bernie Mac) ruled the radio backing up star Marcus Hooks with their velvety vocals. Decades later, Floyd is retiring and Louis is trying to keep out of prison, with both men still nursing resentment over their awful breakup. When Hooks dies, a memorial concert is booked, with a request for the The Real Deal to reunite and perform. Sensing an opportunity to relive their glory years, the cranky old men agree to team up, crossing the country by automobile to make a date at the Apollo Theater. Along the way, Floyd and Louis find themselves reconnecting through the music and stage moves of yesteryear, soon encountering a possible daughter in Cleo (Sharon Leo), the love child of a former group member.

Director Malcolm D. Lee is perhaps best known as Spike Lee’s cousin, only the more serious statements of race and world relations elude his touch. This Lee loves his slapstick, and “Soul Men” is an amusing offering of the silly stuff, using the ample gifts of the leading men to land some big smiles.

It should come as no surprise that Mac and Jackson work beautifully together. With both actors skilled at extracting laughs and firing rounds of profanity in increasingly inspired ways, the duo makes “Soul Men” a welcome prospect. Just how much chemistry they share is the real surprise of the film. Playing round after round of verbal tennis, Mac and Jackson form a believable bond without help from the bland screenplay, using Lee’s patience with screen mischief to get to the core of partnership that makes up the heart of the feature. After years of Cosby domestication, the old Bernie Mac erupts in “Soul Men,” showcasing the actor back to his old wild-eyed, forked tongue self. Jackson matches Mac well, embracing his own soul-patched brand of contempt and bravado, which bounces well off Mac’s sensitive insanity. Even better, the two actors don’t embarrass themselves onstage, busting out some smooth Temptations-inspired moves and tentative vocals that maintain the illusion of a once mighty music industry force.

With Lee allowing “Soul Men” to chase bawdy antics for the boys, especially the Viagra-chomping Floyd and his string of sexual partners (including Jennifer Coolidge and, of all people, Vanessa del Rio), the mindlessness of the film is hospitable, broadly playing up road trip setbacks and brotherly communication problems between Floyd and Louis. It’s only a matter of time before Lee shoehorns a story into the film, using a question mark of paternity, medication misdirection, and pursuit by Cleo’s thug boyfriend to embellish what should rightfully be a wafer-thin comedy. The new weight of contrivance is deadly to the film’s essence, stopping the laughs for excess characterization that isn’t welcome. Had the writing worked into edgier, smarter terrain over formulaic dribble, perhaps the journey of The Real Deal might’ve been something to cheer for.

“Soul Men” treats the music genre with respect, and a nice cameo from Isaac Hayes lends the proceedings a jolt of royalty, even if the aftertaste is a bit ghoulish (a scene with Mac trapped in a coffin is equally uncomfortable). This is a funny picture, just not a consistent one, starting Bernie Mac’s good-bye tour on a delightfully rowdy note, while reminding the viewer that as hilarious a man as he was, Mac had lousy taste in screenplays. 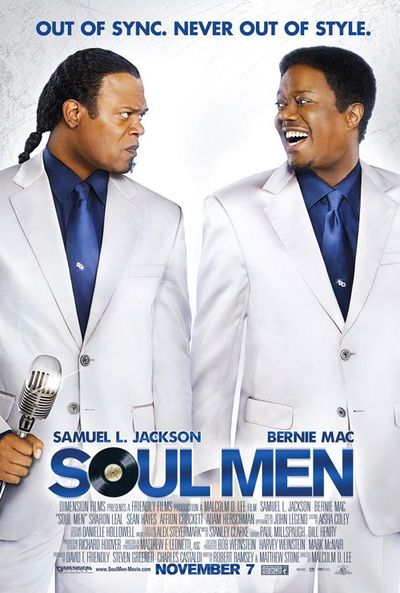 So what leads Vanessa del rio (as Mack's "Full-Figured Neighbor") to actually do it with him?