Having found his way to the hot seat on the Indian version of “Who Wants to Be a Millionaire?,” young Jamal (Dev Patel) is quickly approaching the top prize, having defied all the odds with his string of correct answers. Accused of cheating, Jamal is arrested and brutally interrogated by a suspicious detective (the great Irfan Kahn). In an attempt to protect his life, Jamal carefully explains how he came to hold the answers to the difficult game show questions, tracing back through his life and divulging the horrors he witnessed in the slums of Mumbai with older brother Salim (Madhur Mattal) and fellow orphan, and object of desire, Latika (Freida Pinto).

When I write “contrivance,” I’m aware it calls to mind the worst of cinematic insecurity: the relentless pandering to help keep box office returns up by feeding the world a comforting mush of the familiar; however, “Slumdog” is not this kind of lazy story telling. Instead Boyle takes the machinations of a traditional tragic romance and breathes new life into the clichés, leaning more toward the grit of Jamal’s life than his fragments of jubilance. It’s all stuffed into a sprawling story of a life lived under the thumb of poverty, violence, and guilt, presented a single miracle evening that could possibly induce an entire reversal of fortune.

Employing his trademarked visual frenzy, Boyle “(Trainspotting,” “28 Days Later,” “Sunshine”) wraps the viewer up in the chaotic motion of Indian street life, where life is cheap, the ramshackle communities are built on towers of rubbish, and the citizens make do the best they can. To track his impending “Millionaire” question showdown, Jamal is forced to relive his life for the local authorities, plunging back to horrors buried and childhood lost. Boyle plays with time and location to a dazzling degree, keeping the audience unsettled as the camera shadows Jamal’s extreme boyhood trauma, facing shocking parental loss, “Oliver Twist” style exploitation from a kingpin of child street beggars, and the continual elusiveness of Latika, whose liberation from the clutches of sexual and physical abuse becomes a personal quest for Jamal.

While “Slumdog” certainly follows disturbing dramatic passages to build a formidable wall of desperation for Jamal, the picture is saved from a depressive tone by Boyle and his celebration of self-preservation, often backed by an outstanding soundtrack of vivacious hip-hop and electronic cuts that propel the story forward. Jamal doesn’t recognize Mumbai or anywhere else he lands to be a place of despondency, it’s just a new land to conquer under the instruction of his brother. Boyle is cautious to maintain a sense of humor to “Slumdog,” most notably when the boys arrive at the Taj Mahal, inadvertently becoming clueless guides to gullible Euro tourists, stealing shoes on the side.

The final act of “Slumdog” is fixated on Jamal’s longing heart, and while Boyle allows a surplus of tenderness to enter the picture, he shies away from pure sugar. Even if the needle of destiny between Jamal and Latika isn’t threaded throughout the film as tightly as needed, the actors, both relative newcomers, explore the hunger with perfection. The relationship positions the story into a place of outrageous suspense, leaving the viewer on the edge of their seat as Jamal faces down a final trivia question that could make or break his life. The answer is perhaps not surprising, but the journey is consistently extraordinary. 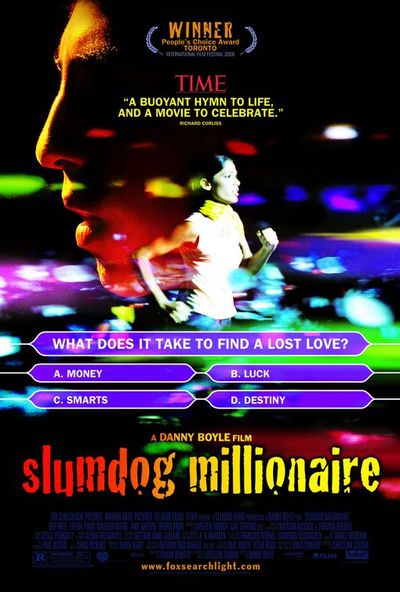 Slumdog Millionaire is as acerbic as it is clear-eyed about the brutal power dynamics in modern-day Mumbai. But, at the same time, what makes it so warming and what has been inspiring audiences all across the world to cheer at its rousing ending.