As a spokesman for a rancid energy drink, Danny (Paul Rudd) is feeling defeated by life. Recently dumped by his longtime girlfriend (Elizabeth Banks) and faced with the one-dimensional yammering of partner Wheeler (Seann William Scott), Danny lashes out violently, leaving the two men with an option: jail time or act as big brothers to a child in need. Reluctantly opting for the latter, Danny and Wheeler are teamed up with two special people: foul-mouthed kid Ronnie (Bobb’e J Thompson) and teenaged sword and sorcery role-playing fanatic Augie (Christopher Mintz-Plasse, “Superbad”). Forced into the mentoring game, Danny and Wheeler initially reject the companionship, but as the weeks pass and the challenges mount, the men grow to like their charges, soon investing fully in their lives.

It’s refreshing to witness director David Wain (“Wet Hot American Summer”) endeavor to make a silly comedy with oddball touches. “Role Models” is a fairly straightforward bit of humor, sweeping up bits of Peter Pan syndrome, raunchy one-liners, and acidic irony to supplement the formulaic screenplay (credited to four people, including Rudd). “Models” isn’t surprising, but it’s filled with substantial pockets of laughter, most emerging from Wain’s sense of playfulness and desire to reach for an alternating routine of the broad and the obscure in the humor department.

A majority of “Models” is simply predicated on the reactions of Rudd and Scott as they stumble into the headspace of their troubled kids. Both actors are terrific fun in their roles, playing up the discomfort with generous timing, especially Rudd, who’s handed a gem in Augie: a knight in a live-action, role-playing dynasty that opens the film up to numerous depictions of nerdly enthusiasm and overdramatic adults playing make believe. Wain actually reserves plenty of screentime for the LARP sequences, including a sublime ending where all the frustrations of our characters are sorted out on the battlefield of absurdity.

Cast well (Jane Lynch kills as the big brother program honcho) and infused with enough sardonic pluck to pick up steam after a lukewarm opening act, “Role Models” hits a rough patch during the midsection, where Wain succumbs to screenwriting 101 templates to push his film to the finish line. This movie isn’t going to touch any hearts, so it baffles me why Wain would even try his hand at sentimentality as Wheeler and Danny are separated from the boys due to ineffective supervision. It’s a wet blanket on the film the very moment it starts to hum pleasingly. The intent is to create an underdog situation for the picture, but it succeeds more in killing the laughs.

With numerous KISS references (Wheeler and Ronnie’s bonding point), ludicrously potty-mouthed children, and the cast giving the material a nice bite when it needs it the most, “Role Models” turns out to be a film of select bellylaughs and constant smiles. It’s not quite a barnstormer, but it has a wealth of small charms, and Wain works them all over with his special brand of absurdity. 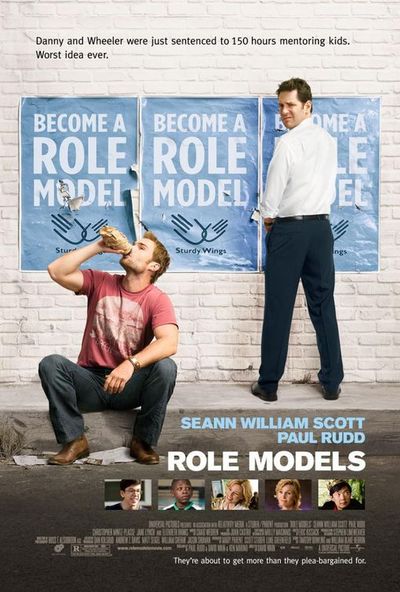 I saw this one in a screening in Hollywood on Monday. I'd have to say you hit all the points I thought about the movie. It wasn't great... the opening act was just too slow! But there were osme really fun parts, and Jane Lynch was wonderfully comic, just like her role in Christopher Guest's A Mighty Wind.