After the suicide of his beloved, traitorous lover Vesper Lynd (Eva Green), James Bond (Daniel Craig) is on the hunt to find the organization who forced her hand. Under strict orders from M (Judi Dench) to keep his investigation free from a sizable body count, Bond can’t help his brutish ways, setting off around the globe to pursue Dominic Greene (Mathieu Amalric, “The Diving Bell and the Butterfly”), a member of the terrorist organization Quantum. Teaming up with like-minded assassin Camille (Olga Kurylenko, “Max Payne”), the duo chase Greene to South America, where the concerns of oil production lead Bond to revelations of more insidious power plays at hand.

2006’s “Casino Royale” was the official reboot for Bond, stripping away the sugary gloss of the Brosnan efforts to bring the character back to the Connery golden years. It clicked beautifully, with director Martin Campbell shaping a gritty, slippery, emotionally resonate Bond film that reminded audiences all over the globe that there’s still some excitement to be had with this nearly 50-year-old film series. It was a startling commercial and artistic success, and rightfully deserved its immediate status as one of the best Bonds to date.

“Solace” takes everything that was so painstakingly built by “Royale” and burns it to the ground, and the blame falls solely on Forster, who really has no business making a film of this size. “Solace” is a challenge he can’t crack, and his desperation to survive the picture reverberates through every deadly scene and half-baked bit of conflict. The whole film eludes Forster’s skill level, a sensation that pinches the hardest during the action sequences.

“Royale” didn’t reinvent the wheel, but it gave the camera some fresh fine details of combat, the Parkour touches being especially welcome. “Solace” doesn’t have much in the way of thunderbolt action choreography. Instead, it has edits. Loads of them. To watch “Solace” genuflect to the god of blur makes my heart ache, reducing every violent gesture into a million little pieces of information, using chaos to somehow pass for ruthless authority. “Solace” has enough problems trying to trump the Jason Bourne films for fight choreography inspiration, it doesn’t need purposeful visual perplexity to gum up the works further. A perfect example of Forster’s malarkey is found at the film’s opening, in which Bond, dressed in black driving a black car, is chased by evil henchmen dressed in black driving black cars. Any audience member who can make sense of the monochromatic mayhem underneath all the breakneck cutting deserves a medal and a signed Daniel Craig photo.

Whatever swell ideas that swim to the surface during the remainder of the film are promptly snuffed out as well. Bond infiltrating a top secret Quantum meeting during an extravagant outdoor opera (the Bregenz Festival in Austria)? Inventive and sufficiently Hitchcockian. Forster abusing a stray aria to aurally backdrop Bond’s escape plan? Resembles a perfume commercial. For every one of Forster strapping visual inspirations, the film presents 10 awful ones in return, of course, cut to smithereens. A cutesy, heavily underlined “Goldfinger” callback is enough to give up on the movie altogether. So much for uncompromising reinvention.

With Forster brought on board specifically to corral the actors, it’s hard to find fault with the steely concentration going on during the film. Craig remains a flavorful Bond, it’s only that he doesn’t have much to amuse himself with during “Solace.” With Greene’s not-all-that-diabolical scheme (he’s a corporate stooge with an bizarro Al Gore imagination) eating away most of the short running time (100 minutes), Bond is left on the sidelines, only sent into the fray to bed banal Bond girls (unappealing actresses Kurylenko and Gemma Arterton fail to arouse, especially after Eva Green matched Craig so spotlessly in “Royale”), hydrate stale dramatic loose ends, and bear the brunt of Dench’s shrill performance, which removes the elegant MI6 confidence of the M character to turn her into Bond’s constantly harping Bubby.

There’s no antagonistic tension between Bond and Greene, no criminal voltage for the actors to embrace and the audience to dine on. The screenplay makes little effort to strike up any sort of combustible chemistry between the characters, preferring to invest fully in Greene’s ecological deceptions and tedious global politics. Today’s Bond film might not itch to offer a larger-than-life, hands-on-hips villain, but there should be something sinister, anything, to zero in on and treasure. Amalric is a marvelous actor and communicates Greene’s wormy ineffectiveness with twitchy polish, yet as a Bond villain, the character is a featherweight distraction. I don’t care how topical Greene and his energy-siphoning ways are. Once the climax arrives and there’s little reason left for Bond to obliterate the bad guy, there’s obviously something seriously defective within the screenplay. “Solace” treats delicious comeuppance as a burden.

Forster doesn’t know what film he’s supposed to make with “Solace” so he bungles the entire shebang in a quest to smudge his fingerprints everywhere. Positioned directly as a sequel to “Royale,” the stars were lined up here to continue the greatness that was reignited; to construct a different direction for the series that wouldn’t offer glacier surfing or Denise Richards; and to present a bruiser Bond who enjoys the sound of cracking skulls over the clinking of cocktail glasses. Instead, “Quantum of Solace” turns 007 into a bore. Even worse, he’s a bore with once killer moves that are impossible to appreciate viewed through Forster’s distorted touch. 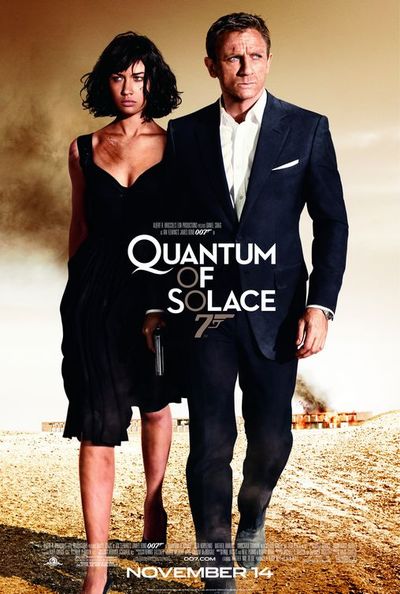 Casino Royale was awful--remember the defibrillator sequence and the spanking scene for starters? Altho Craig is fine, his Bond, as written, had no class, being reduced to a brutish and pathetic gambling junkie, even given to throwing little ranting snits when he lost. Dumb beyond belief, too, brainlessly gulping down every cocktail his enemies offered. I saw it cheap in Mexico; if this one's even worse, well, they won't get my pesos.

hey nice review.....someone who says it like it is