The time has come for Alex the lion (voiced by Ben Stiller), Gloria the hippo (Jada Pinkett Smith), Marty the zebra (Chris Rock), and Melman the giraffe (David Schwimmer) to leave their makeshift residence under King Julien’s (Sacha Baron Cohen) enthusiastic reign and head back home to New York, flying the safety-last Penguin Express airline. When plane troubles arrive mid-flight, the aircraft crashes into the wilds of Africa, leaving the passengers overwhelmed in paradise. Reuniting with his father Zuba (Bernie Mac), Alex finds himself in the middle of a struggle for control of the land, easily tricked and humiliated by the devious Makunga (Alec Baldwin). Now faced with their dreams come true, the foursome have to deal with the unkind consequences of life lived among their own kind.

As a silly animated distraction, “Madagascar” got by on a smidgen of heart, respectable vocal performances, and fine help from those hilarious penguins. The militaristic flightless fowl four returns in “Africa,” and, no shock here, the penguins steal the movie yet again with their resolute antics, exemplifying the sequel’s delicious zany side with bright flashes of hilarity and absurdity. However, the penguins are not the stars of the show (they really need their own feature-length movie). We’re here for Alex, and I’m still wondering if that’s such a worthwhile expedition.

The production has some difficulty dreaming up a new adventure worth the time invested, moving the action into the wilds of Africa and challenging our heroes with their dream come true. After a group effort in the previous film, “Africa” separates the lead animals, sending them to their specialized moments of self-realization. A few of the turns nudge interest: Marty finding literally his own kind with a herd of doppelganger zebras (all voiced by Rock), and Julien’s quest to rule Africa permits Cohen a few moments of riffing that bring big laughs.

The irritant is Alex, who once again takes center stage, only in “Africa” the character is trapped in a reluctant heir to a jungle kingdom subplot that doesn’t jump off the screen, failing to drive the movie’s thematic core as intended. It’s nicely acted by Stiller, Mac, and Baldwin, but the scenes aren’t pleasurably silly, they lack any emotional quality, and often slow the film to a full stop. A subplot detour with a pack of human tourists stranded in the wild, led by Alex’s old foe Nana (Elisa Gabriel), is another comedic sleeping pill the film could do without.

“Africa” sails fine when the production peels off the plot and just acts crazy for a few minutes at a time. The sequel reaches a few feverish Looney Tunes-style pressure points, often unsettlingly broad with slapstick. Still, speed is a good friend to “Africa,” especially when the picture lays back and enjoys the world created in the previous film.

If you found any merit in “Madagascar,” “Africa” will fill the same requirements for animated entertainment. It’s a bumpy journey, but there are still enough giggles available to warmly embrace this second round with some seriously quirky animal pals. 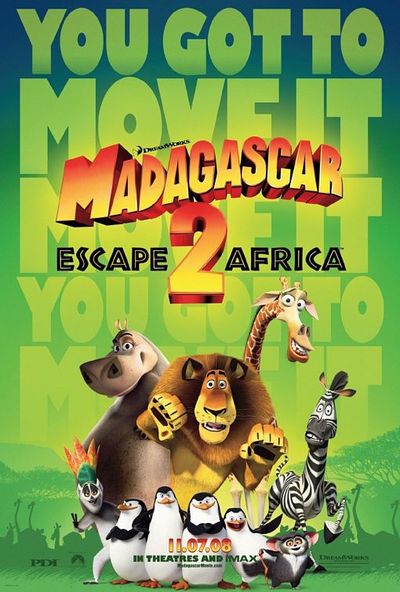