Celebrating her fourth marital engagement, indecisive Tala (Lisa Ray, “Water”) is growing concerned with a dreary life of compromise and expectation ahead of her. Meeting timid writer Leyla (Sheetal Sheth, “Looking for Comedy in the Muslim World”) through her family, Tala’s senses are opened, and a strong attraction grows between the women as they bond over shared interests in art and breaking family tradition. When this friendship leads to sex, it freaks Tala out and she soon bails on the relationship, pushing Leyla to reveal her desires to the world and live her life free. Tala, firmly entrenched in suffocating wedding plans, now struggles to find the same release of her true self she enjoyed in Leyla’s presence.

Certainly co-writer/director Shamim Sarif approaches “Straight” from an empathic perspective. The film is nothing if not sensitive to the relatable puzzles of the heart and assorted personal matters of sexual preference. It’s a standard coming out tale, replete with disapproving parents and constipated professions of love, only the waters are muddied by the presence of geopolitical concerns, centered on the Israeli-Palestinian conflict (the film is billed as “Just another British, Indian, Muslim, Arab, Christian, lesbian Romantic Comedy”) and how it informs some hostility between Leyla and Tala.

The chatter about international relations doesn’t smother “Straight,” but it’s enough of a distraction to wonder what grand plan Sarif had in mind for the persistent subplot. Talk of Middle East politics seems out of place in a lesbian discovery tale, a fact reinforced by the cast, who look as though they’re trying to pass kidney stones when the dialogue wanders to the news page. It’s a laudable effort to use the pressure of cultural restraints to underline sexual repression, but the message is lost in the mix when “Straight” moves on over to the bedroom games.

Only a fool would consider Sheth and Ray as anything less than an ideal pair of lovers, and the actors provide the film with a loving romantic temperament. Like the rest of the performers, the screenplay fails the leads, with Sarif’s direction compounding the headache when the film takes a breakneck turn toward soap opera territory. Still, the actresses are appealing, selling the heat of newfound lust in the face of PG-13 bondage and awful dubbing that encases the entire film in a prison of artificiality (the movie sounds like an Italian horror film from the mid-1970s). Two talents already sharing the screen this month in Sarif’s other film, “The World Unseen,” Sheth and Ray provide just enough allure to the keep “Straight” afloat, albeit in a dilapidated state.

Passes at comedy, family ruin, and vocational fantasy achievement tend to draw out the 78-minute-long feature longer than it needs to go. Perhaps “Straight” fits a cultural need in certain parts of the globe, but universal finesse is absent, making it impossible to appreciate the crucial radiance of self-discovery as idealized in “I Can’t Think Straight.” 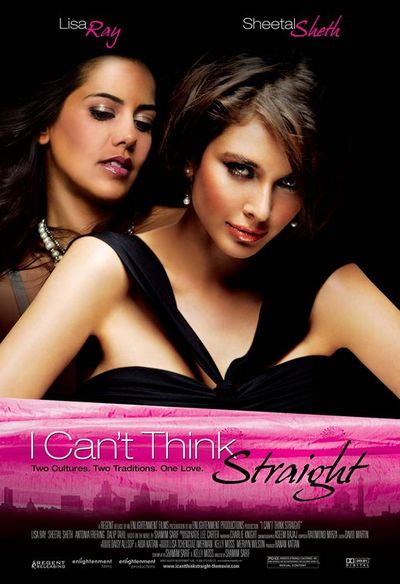 Nothing wrong in the movies. I think the director and actors did the really good work in the movie I Can't Think Straight and The World Unseen.

Yes, I'm agree with Rose. Great movies must watch it. Their website to watch trailer and lots of clips are here http://www.enlightenment-productions.com/index.php?page=films