A couple who refuse the shackles of marriage, Brad (Vince Vaughn) and Kate (Reese Witherspoon) are set for their annual tropical vacation for Christmas, lying to their respective families of divorce to avoid holiday get-togethers. When the airport is fogged in and the flight is canceled, the couple is busted by exposure on the local news, forcing them to travel to four Christmas gatherings and deal with the social discomfort. Driving around to face plenty of reminders why they fly away every year to avoid family, Brad and Kate soon discover their own relationship faults, leading them to question their future as couple.

Perhaps the most inspired element to “Four Christmases” is the hiring of director Seth Gordon to oversee this holiday comedy. Gordon, who deftly constructed one of the best films of 2007 in the video game documentary “The King of Kong” (star/champ Steve Wiebe cameos here), is handed the keys to the Porsche: a shot to make a fatcat Hollywood comedy with two major stars. I wouldn’t suggest that Gordon is outgunned in “Christmases,” but there’s a distinct lack of screen authority permeating the mood of the film. It’s tough to blame Gordon for the ultimate failure of the picture. After all, corralling Vaughn and Witherspoon can’t be an easy job for any director, especially one who only had to deal with nerds and arcades for the last three years.

The Vaughn effect ripples through this picture at top volume. Assuming producing duties with Witherspoon, Vaughn loves his holiday comedy served up in huge portions, and that’s what “Christmases” offers to the viewer: slapstick by the barrelful. Traditionally a welcome development, “Christmases” doesn’t know when to stop. Sending Brad and Kate to four different households for celebration, Gordon establishes each set of parents with their own unique hardship to overcome. For Brad, he has to deal with a brutish father (Robert Duvall) and brothers (Jon Favreau, Tim McGraw) who pound on him both physically and verbally, and a mother (Sissy Spacek) who’s hooked up with one of his former friends. Kate is confronted with her female-heavy extended family (including Mary Steenburgen and Kristen Chenoweth), and an absentee father (Jon Voight) who wants to right past wrongs.

The plot elements are there to explore plenty of shenanigans, but Gordon accelerates the physical comedy immediately, turning a festive tale of disgruntled jerks into a broad farce that has plenty of fall-down-go-boom sequences, is splattered with baby puke and creepy sexual innuendo, and remains slavish to Vaughn’s motormouth improvisational skills. While the film plays to his strengths, Vaughn just doesn’t have meaty material to chew on here and faces a lousy dance partner in Witherspoon, who couldn’t be funny even if she snorted the ashes of Redd Foxx. The leads have no chemistry, barely convincing themselves they’re a loving couple, much less the camera, which picks up on a strange divide between the actors. Actually, Chenoweth seems a better match to Vaughn, able to distribute caustic body blows and holiday warmth in a few short scenes, with Witherspoon failing to achieve anything resembling a personality over the course of an entire movie.

When it comes time for “Four Christmases” to grow a heart, the mood doesn’t mesh properly with the zany tone the picture has been working up a sweat to achieve. Assuming the audience has grown fond of Kate and Brad, the screenplay glazes on the concern in the final act, oddly squelching the laughs in the process. It’s a trade-off that’s not welcome, switching obnoxious slapstick for unearned, and quite cloying, sentiment. And not the Christmas spirit kind of pathos, but the broken relationship kind, further confusing the tone of the film. If Vince Vaughn wants to ruin Christmas, he’s going about it the right way. Another year of this coal-in-stocking cinema and the holiday spirit will be beaten out of me for good. 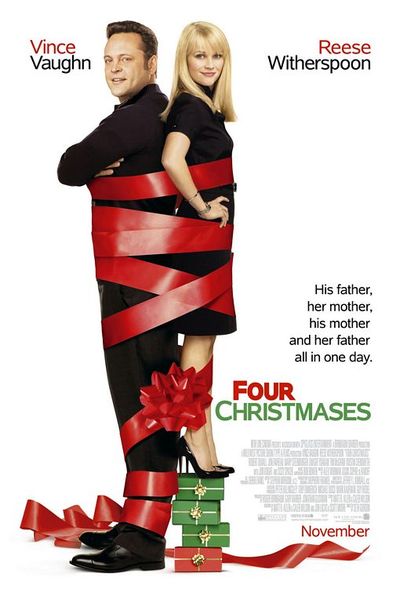