Bolt (voiced by John Travolta in a winningly playful performance) is a Hollywood canine action star, only he doesn’t know it. As the lead in a hit television series, Bolt spends his day defending “his person” Penny (Miley Cyrus) from a stream of bad guys with his heat vision, karate-chops, and super bark. Accidentally separated from the show, Bolt finds himself shipped to New York City, making it his mission to return to California and soothe a worried Penny. Taking a street cat named Mittens (Susie Essman) as his prisoner, Bolt is forced to confront a world where his “powers” are on the blink. Befriending an enthusiastic admirer in Rhino the hamster (Mark Walton), the trio trek across the country, with Mittens teaching Bolt the realities of life as an average dog.

“Bolt’ is a nice change of pace from the Disney Animation Studios norm. Coming after the misguided antics of “Chicken Little” and “Meet the Robinsons,” “Bolt” settles into more comfort food tones, showcasing the antics of cute animals against a backdrop of pure Americana. Directed by Byron Howard and Chris Williams, the picture contains a lovely momentum, shifting between threads of comedy, slick action (emphasized outrageously in Disney Digital 3-D), and heartache with minimal fuss throughout most of the running time, hitting expected notes of mass-consumption gaiety that will surely amuse younger audience members.

Trouble is, there’s no real bite to “Bolt” in either plot or emotion, leaving behind a frustratingly shallow movie that’s much too quick to lay the melodrama on thick in an attempt to reach out to the viewer. Bolt’s arc from superdog to confused canine is a point belabored into ground by the filmmakers, who whip the straightforward plot point over and over, reducing the movie’s pace to a crawl at certain critical junctures. The sympathetic goo is extended to Mittens and Penny as well, who get their own overscripted cross to bear, again, stopping the movie cold in the name of derivative manipulation.

“Bolt” is breezier as a road movie, watching the group cross the country on their way to Los Angeles, with Mittens giving Bolt pointers on primary pooch pleasures, such as begging for food and car riding smell opportunities. The performances lend the movie an interesting spin, as Travolta and Cyrus are the only real stars of the movie. The rest of the cast is made up of character actors (including Greg Germann, Diedrich Bader, and James Lipton) cast more for vocal quality than star power. It’s a nice change of pace, especially with the likes of Walton, who puts his heart into interpreting Rhino’s Bolt fan spasms and plastic-ball-encased heroism, gorging on slapstick to become the film’s comedic highlight and the lone character not burdened with an irritatingly gloomy backstory to overcome.

More admiration for “Bolt” is revealed with the film’s soundtrack, employing Jenny Lewis (a musical performer of staggering serenity and crushing grace) to provide a mid-movie montage with a bouncy, folksy song entitled “Barking at the Moon.” Further surprise arrives at the end credits, with John Travolta returning to his “Let Her In” musical roots to duet with Cyrus on the tune “I Thought I Lost You.”

Filled with explosive canine derring-do, gorgeous animation with a pleasing fixation on Midwest panoramas, and a hilarious psychotic hamster rolling around stealing laughs, it’s easy to appreciate “Bolt” as a nontoxic entry in the CG-animation sweepstakes. Perhaps the film isn’t endowed with a glop of Pixar preciousness, but “Bolt” gets by on a heady froth of charisma and a few surprises where it counts the most. 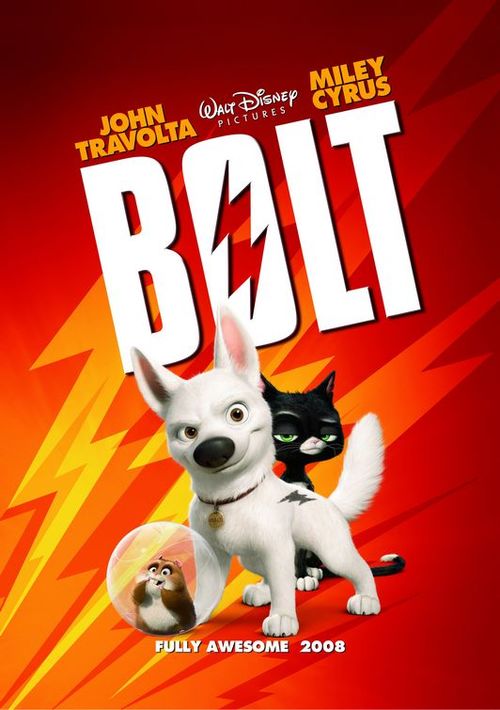