Arriving from England pre-WWII, Sarah Ashley (Nicole Kidman) has come to sort out the troubles plaguing her sprawling Northern Australian cattle ranch, Faraway Downs. Finding her husband dead, corrupt caretakers, and an Aboriginal family with nowhere to turn to, Sarah seizes control of the land, much to the dismay of King Carney (Bryan Brown), a rival cattle baron with eyes on purchasing Faraway Downs. Removing the insidious Fletcher (David Wenham) from the property, Sarah is left without help. Enter Drover (Hugh Jackman), a weathered man of the outback who comes to Sarah’s aid, whipping the ranch hands into shape, and finding a place for Nullah (Brandon Walters), a “half-caste” Aboriginal boy trying to avoid governmental detainment during the harsh “Stolen Generations” years. Driving the cattle across the ruthless landscape, romance quickly blossoms between Drover and Sarah, soon threatened by the dawn of WWII and Fletcher’s unstoppable efforts to exact revenge.

While “Australia” is a return to more patient blockbuster filmmaking, it doesn’t exactly mean Luhrmann has rid himself of his cheek-slapping sense of humor. Much like his 1996 blast of style “Romeo + Juliet,” “Australia” opens with a good 20 minutes of severe compositional behavior to unsettle the audience before they’re eventually comforted. Whirring around from location to location to set up the story and introduce the audience to a plethora of characters and motivations, Luhrmann is shot out of a cannon, intriguingly blurring expectations as “Australia” starts to settle down. This brief glimpse of Luhrmann’s more impish behavior is a nice callback to past triumphs, while also thrusting the audience into a strange world of the titular landscape, positioning the viewer in the foreigner role, much like Sarah, taking in the natural majesty of Faraway Downs and the brutal survival instincts required from its residents with eyes wide open.

Once Sarah assumes her responsibility and Drover asserts his cattle knowledge, beginning an understaffed drive across treacherous terrain, “Australia” begins to take customary shape, angling toward the “Gone with the Wind” and “Lawrence of Arabia” style scope that seems to tickle Luhrmann’s fancy the most. A tale of grizzled men, delicate but steely women, and the naturalistic hazards that intimidate relentlessly, the film won’t snatch any awards for originality, but the conviction of the filmmaking is second to none. Luhrmann takes “Australia” to dazzling heights of romantic sincerity and nerve-racking adventure, toying with screen archetypes without a hint of irony; the filmmaker appears fully invested in creating a genuine motion picture event of good vs. evil. Luhrmann has always held a soft spot for love stories, but here he’s shooting for bigness to backdrop emotional simplicity. And I’ll be damned, it works.

“Australia” may not be the most understated of movies, but lending it a distinctive personality is the country itself, and how determined Luhrmann is to keep international flavors out of the mix. This is an Aussie tale all the way to the bone, using pivotal moments of wartime ruin and racial hostility to help fatten the story beyond Drover and Sarah’s domesticated affair. In fact, the film belongs to Nullah, who represents the Aboriginal injustice and divine mysticism of the screenplay, with Luhrmann using the boy to embody issues of unfettered bigotry and cultural divide (see “Rabbit-Proof Fence” for another take on this gut-churning moment in Aussie history). Beyond the fact that Walters gives one of those all-too-rare performances of pure youthful instinct and curiosity the film mines exquisitely, the character comes to be a screen presence the film cannot survive without, forming a triangle of charisma and emotional intensity with Drover and Sarah that the director preserves beautifully over the film’s 160-minute-long running time.

Indeed, “Australia” is a lengthy movie, but not one to mope around. Watching the story embark on a blazing cattle drive, portion out Fletcher’s boiling rage, or smoothly bring together Drover and Sarah as they bond in the outback maintains a strict pace to the movie. There’s a swarm of fluid emotions and action sequences to gorge on here, and with both Jackman and Kidman in top form in the lead roles (the actors are energetic and unfathomably alluring), “Australia” is a painless film to immerse oneself in, especially with all the gorgeous locales and vivid costuming to keep the eye occupied.

A western of Aussie proportions for the first two acts (blessed with cast of local talents, including the legendary David Gulpilil as Nullah’s watchful grandfather), the narrative slips into war mode in the final section, when WWII washes up on Australian shores (depicted here with the bombing of Darwin) and divides our heroes. Here, Luhrmann opens his widescreen framing to the limits of multiplex dimension, staging bombing raids and populace chaos with the proper mix of hysteria and teary melodrama. The cast sells the stuffing out of anything the script gives them, creating more of a poignant journey for the final act than a violent one. The conclusion also pays off a running theme of the movie: the calming magic of “The Wizard of Oz.” With “Over the Rainbow” employed by Sarah to console and bewitch Nullah’s fascination with music, Luhrmann tethers himself to the song and reapplies it everywhere, as a sort of emotional touchstone and communal cinematic tribute. It’s a lovely touch.

Let me be clear: “Australia” is not for the average misanthrope, and those less inclined to swallow Luhrmann’s slippery theatricality will find themselves with bleeding eyes, clawing at the walls to exit the theater. For the more inclined, “Australia” is a dramatically fertile, immersive gem: an epic with true epic intentions and execution, reinvesting in patient storytelling and widescreen magnetism. 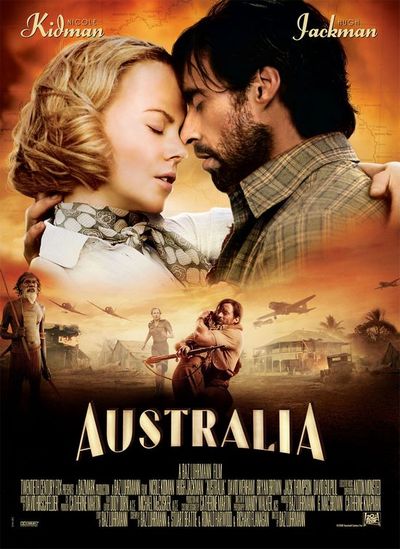 A-?! This movie is perfect. I request you change this to an A+.