Arriving in Spokane, Washington from Beijing to visit his daughter Yilan (Feihong Yu), elderly Mr. Shi (Henry O) is looking forward to working on his English and getting a better idea of why his daughter experienced a failed marriage. Once settled, it becomes clear that Yilan is hoping to avoid her father as much as possible, leaving Mr. Shi wandering around the neighborhood, striking up friendships with fellow adults of various cultural backgrounds. Trying to deduce just what’s ailing his child, Mr. Shi finds Yilan’s tolerant life challenges his customs, forcing him to reconsider his own mistakes to best appreciate Yilan’s.

Shot with HD cameras under the direction of Wayne Wang (with a script adapted from Yiyun Li’s short story), “Prayers” is a character piece that humanely probes into the conflicts of a father and daughter divided by cultural perception and wilted emotional exchanges. It’s a poetic film, quite satisfied with extended takes of observation, assuming the perspective of Mr. Shi as he ventures out into the strange land of suburbia greeting strangers with hopes to better relate to his daughter. Wang appreciates the stillness of Mr. Shi, using his reserved manner to contrast against the coarse politeness of the America he encounters, finding some light comedic moments to counteract what is a somber tone for the picture.

Just watching O’s performance is enough to allow “Prayers” to make a lasting impression. O’s work merges contemplative thought with social curiosity into a luxurious character who peers out from behind his years at a democratic land that confuses him, yet enchants him completely. While the Yilan subplot is where “Prayers” is ultimately headed, Wang makes time for Mr. Shi to have his adventures, most notably in the company of a similarly-aged Iranian woman who communicates with Mr. Shi through broken English and a shared history of political oppression. These moments capture the passion Wang is hoping for, sitting down with two lonely people and hearing their fracture enthusiasm for conversation and company. The film shines brightest when emphasizing these misplaced souls.

The payoff of Yilan’s distance is a complicated issue that fits uncomfortably with the rest of the movie dramatically, yet fulfills thematic requirements appropriately. Watching Mr. Shi and Yilan come to terms with their dysfunction isn’t easy to watch, and Wang treats the emotional frost with surprising reality, concluding “Prayers” on a mournful, yet accurate note of matured familial contentment. 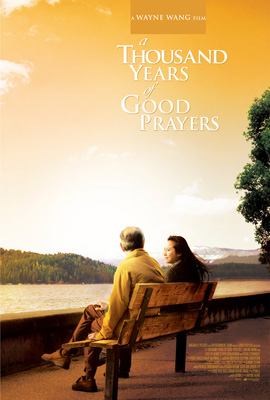