When 2004’s “Jersey Girl” was greeted with tepid reaction from critics and anemic box office, I think it stung Smith more than he ever let on. “Zack and Miri” comes across as a calculated attempt to merge the sensitivity of the unjustly dismissed “Jersey Girl” with the harder-edged comedies he’s built a brand name with, in a manner that furthers his directorial career while still feeding the faithful what they’ve come to expect. At first glance, the film seems a slam-dunk for Smith, as it plays to his lovable sense of verbal mischief and visual minimalism, padded with a cast of familiar faces. Yet “Zack and Miri” is vacuous effort that never soars as high as the plot promises, and soon gives way to rushing flood waters of formula that Smith has always been more than ready to slap around before.

Smith visualizes something romantic with his porn comedy, following a dispiriting screenwriting 101 structure that has our leads finding attraction during filming, yet cannot muster the courage to compose any lovesick confessions. To his credit, Smith achieves the desired motivation for this plot turn through a marvelous use of music and expressive close-ups during the titular bout of fornication. It’s only where Smith takes the development that’s a cause for concern and “Zack and Miri” doesn’t waste much time before it starts consuming established romantic comedy clichés, and not ironically. Smith wants to melt a few hearts, but it’s executed in a synthetic, melodramatic manner. Even Smith appears embarrassed by his employment of worthless convention, throwing in some literal, splattery defecation to snap the audience awake.

I hate to be hard on “Zack and Miri.” After all, Rogen and Banks are talented, sharp performers, and while they don’t share the greatest chemistry in the world, they know how to sell the cockeyed whimsy Smith is aiming for. Supporting turns from Lords, Mewes, and Long have a playfulness the rest of the movie abandons to make useless kissy faces. Superman himself, Brandon Routh, even shows up in a cameo as Miri’s object of desire and acquits himself nicely to the land of comedy. Positives are certainly here: the cast is solid, the wintry Pittsburgh locations communicate the claustrophobic debacle the characters find themselves in, and Smith does land a few edgy one-liners to put on his mantle before they’re improvisationed away by Rogen’s motormouth. 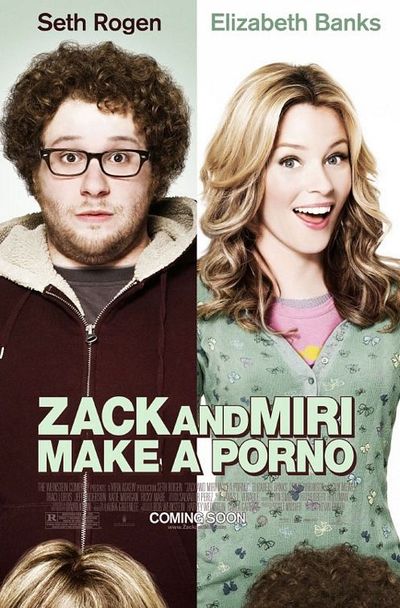