Barry Levinson has returned the fun in making fun of Hollywood, and that’s saying something if one takes into consideration the last decade of motion pictures the once miraculous filmmaker has churned out. “What Just Happened” turns the tables on the industry, mounting a satire of egos, box office returns, and panic attacks without the cluster of winks typically associated with Tinseltown razzing. It’s specialized product, but it plays broadly and cleverly.

A super-producer, Ben (Robert De Niro) is facing professional ruin when his latest film, the dog-killing Sean Penn opus “Fiercely,“ tests poorly, and the studio honcho (Catherine Keener) starts breathing down his neck to recut the film. Compounding Ben’s problems are domestic issues with his ex-wife (Robin Wright Penn), professional spats with the combative director of “Fiercely” (Michael Wincott), and beard issues with a tremendously sensitive Bruce Willis. Attempting to juggle all his troubles, Ben feels the pinch, racing around Los Angeles trying to placate his enemies with hopes that time, and exceptional box office returns, will save his career.

Written by industry fixture Art Linson (based on his 2002 industry tell-all), “What Just Happened” has been severely fictionalized and restructured to fit Levinson’s vision for the picture as a fast-talking, palm-sweating tribute to the Hollywood jungle. “Happened” is more a film about survival instincts and sacrifices than poking a stick at behind-the-scenes nonsense that could never be legally satisfied onscreen. Linson’s role has been changed to Ben, and his misadventures have been handed over to a declawing screenwriting process, with an aim more toward satire than stark backstage horror.

To see Levinson feel out the material with a surprising degree of success is a delight. I was ready to write off the filmmaker after 2006’s confused “Man of the Year,” but “Happened” puts Levinson back in control, deftly twirling the knobs on this single week in Ben’s hellish life. Levinson tries to play the material cool, keeping Ben floating through his community as his speeds from location to location putting out professional and personal fires, with his Bluetooth earpiece nearly surgically attached to his head. Ben doesn’t get angry, he compromises, and Levinson adores the contrast between the character’s metered exterior and the hysteria of his industry playmates, including a sickly agent (John Turturro), a frustrated screenwriter (Stanley Tucci), and various unmerciful studio heads. It’s captured with outstanding cramped poise by De Niro, who makes every inch of humiliation felt in his performance, yet it’s Levinson who maintains overall pulse. His knowledge on the subject mixed with Linson’s wonderland atmosphere of spoiled brats and spineless fools makes for a riveting, uproarious viewing experience.

“Happened” takes a few pages out of the broadly comedic playbook, arranging a few familial coincidences for Ben that strain credibility and feel superfluous to the story. Levinson and Linson are best when they work the industry over with their jabs (creatively accompanied by the “Fiercely” scoring sessions), encouraging stars like Willis to go to town playing up superstar tantrums, and sending Ben into enlightening test-screening and studio meeting situations that remain comedic, yet retain unexpected educational value in the manner Levinson evokes the pressure of success and, the true origin of concession, the protection of livelihood. Hollywood might seem like a luxurious devil’s playground, but to some of these participants, it’s their only means of income and it must be protected no matter the artistic bastardization required.

“What Just Happened,” with a few Variety headline and agent gags, is surely insidery enough for the intended core audience of the industry elite. Still, the film remains accessible to any passing fan of film production, providing a stout offering of laughs and winces to backdrop a tale of a selfish man forced to eat the failures of his life to achieve a certain peace with his shame. It’s wonderful to see Levinson’s comedic concentration restored, and to find the journey of the producer as he navigates his frenzied life executed with the precise amount of generosity, insight, and venom. 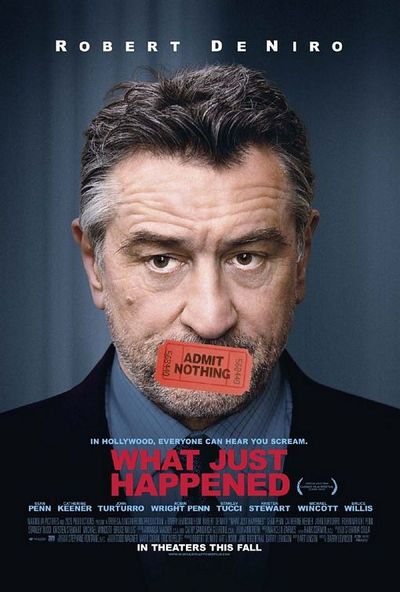