A whopping 19 producers had their hands in the “Tru Loved” pie, yet nobody told director Stewart Wade that his film was being swallowed whole by melodrama. The film surely means well with enormous messages of tolerance and self-esteem, but when “Tru Loved” digs in with broad caricatures of homophobia and all-purpose intolerance, the movie can be a supreme chore to sit through.

New to Walt Whitman High School, Tru (Najarra Townsend) finds trouble fitting in, saddled with the baggage of having four gay parents in her life. When musical-loving, all-star quarterback Lodell (Matthew Thompson) takes a shine to Tru, it sets off everyone’s gaydar except Lodell’s, who swears he’s straight. As the two get to know each other, Lodell finally admits his homosexuality, but remains deeply fearful of coming out due to his football hero status. Using Tru as a hetero shield, Lodell carries on business as usual, making Tru uncomfortable, especially when a straight boy (Jake Abel) shows interest. Lost in self-loathing behavior, Lodell comes to depend on Tru’s kindness while she works to introduce tolerance to the high school, even in the face of outright hate.

Wade’s last film “Coffee Date” was a pleasant low-budget comedy that played around gently with gay stereotypes and misinformation. Far from imposing, “Date” showcased Wade’s gift with froth and actors, overcoming financial limitations with a modicum of wit. “Tru Loved” heads into the opposite direction, with Wade positioning a similar story of blurred sexual identity, only here the plot is dripping with painful after-school-special theatrics that take strong messages and bury them in cringes.

The biggest crime of “Tru Loved” is that it’s impossible to tell if Wade is being overtly sympathetic or just satiric. The film is pitched broadly, with sweeping dramatic arcs cutting through nearly every scene. The intent is crystal clear, but the pinched realization leaves a lot to be desired, with much of the film dissolving into hideous overacting and strained conflict. Lodell’s quest for identity tends to invite most of the misery, leading with Thompson’s dreadful performance and Wade’s odd commitment to make the jock a repellent, brazenly manipulative character unworthy of sympathy. Townsend fares much better as Tru, achieving more heartfelt momentum than the picture deserves.

Of course, there’s a good chance the film was intended for laughs. With a cast of familiar faces (Jasmine Guy, Nichelle Nichols, Bruce Vilanch, Alec Mapa, Jane Lynch, Alexandra Paul, Cynda Williams, and Wez himself, Vernon Wells as a homophobic football coach) hamming it up, it’s easy to take Wade’s picture as a goof, especially with the film’s concept that all the teen guardians depicted here are gay. Of course, “Tru Loved” isn’t a comedy after all, but Wade can’t define his tone to a crisp degree, leaving hokey Melissa Etheridge songs and cheap Katie Holmes punchlines in reaction stasis.

If “Tru Loved” went into the world and comforted a few troubled souls, I would be perfectly fine with that. Surprised, but fine. However, as a movie, it’s an uneven event, failing to secure a point of view worth cheering for. 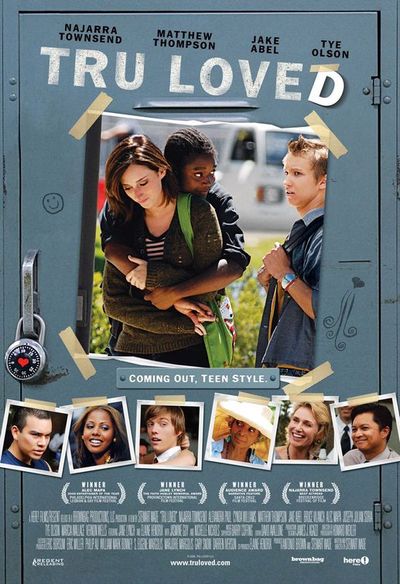