“The Secret Life of Bees” is really “Oprah Book Club: The Movie.” A sluggish attempt to marry histrionic behavior best left in soap operas with a route story of discrimination and abuse in 1964 South Carolina, the picture is an admirable effort to articulate compassion, but remains lost to a sticky mess of melodrama that devours anything close to a sincere moment.

Living under the tight control of her alcoholic father T. Ray (Paul Bettany), young teen Lily (Dakota Fanning) is dealing with her own guilt over her mother’s death and the questions left behind. Leaving T. Ray, Lily and fugitive housekeeper Rosaleen (Jennifer Hudson) hit the road, soon stumbling upon the Boatwright family, June (Alicia Keys), May (Sophie Okonedo), and August (Queen Latifah), and their business of honey production. Joining the women under false pretenses, Lily finds a safe haven amongst the family, who allow the girl an opportunity to find herself and seek out answers to the mystery of her mother while tending to the bees.

Adapted from the best-seller by Sue Monk Kidd, “Bees” doesn’t mess around with subtle acts of indignation. Writer/director Gina Prince-Bythewood aims for the inspirational waterworks with this production, reducing an established astuteness behind the camera to play roughly with manipulation. “Bees” doesn’t strike me as a particularly reflective concept for a movie, working well-worn lines of racial unrest and southern-fried domestic dispute (Fanning’s similar “Hounddog” open mere weeks ago) to middling results, suffocated in overacting and montage-heavy storytelling. It’s not that “Bees” lacks comfort, it just accepts artificiality over soulful nuance, deflating the experience to a robotic bore.

Prince-Bythewood has much to cover with “Bees,” making room to communicate the sisterhood of Boatwrights and their commitment to spiritual harmony while the outside world dissolves into pure hatred. Unfortunately, the filmmaker dials down the family’s personalities to fit more confined, easily digestible narrative spaces, making the hollow performances even more grating. The condensed script doesn’t even make much room for Hudson, who becomes the Silent Bob of the troupe, a merciful quality as the director keeps the rest of the gang in perpetual states of crying and/or sermonizing.

“Bees” is kindly enough and perhaps those who desire a less taxing time at the multiplex will swim comfortably along with the melodrama. “Bees” comes across to me as one-half of a movie, buttressed by artifice to see itself to completion, riding the coattails of the source material to blanket the disconcerting surface quality of the film. It’s impossible to invest in Lily’s distress when she’s a threadbare character, let loose in a screen world of ridiculous stereotypes and sun-kissed contrivance. “The Secret Life of Bees” aspires to make the audience weep uncontrollably as the characters find their inspirational path in life, but it’ll most likely put everyone to sleep. 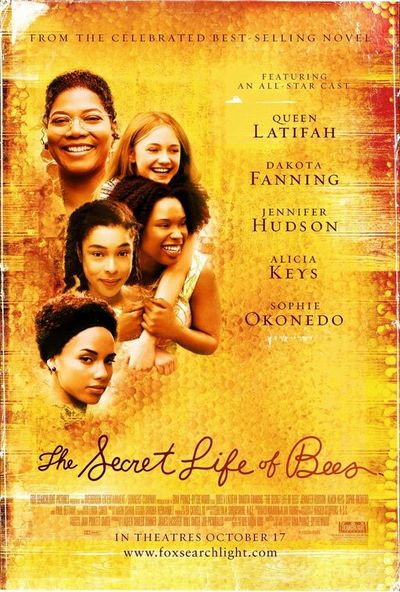