Home Archives Profile Subscribe
DVD Review: Gunnin' for That #1 Spot
Film Review: Dear Zachary: A Letter to a Son About His Father

“Splinter” has nothing novel to offer the audience, but its comfort food. Bloody, screamy, creepy crawly comfort food that cuddles B-movie horror convention without fatigue. If you like your chills served up with simplicity, “Splinter” digests easily.

Out on a failed camping trip to celebrate their anniversary, Polly (Jill Wagner) and Seth (Paulo Costanzo, “Road Trip”) have decided to pack it up and head for a hotel. On their way out of the woods, the couple is carjacked by felon Dennis (Shea Whigham) and his junkie girlfriend Lacey (Rachel Kerbs), who demand transport across state lines. When Polly permanently damages the car running over an oddly infected animal during the tense ride, it forces the group to an isolated gas station for supplies. Once inside, it becomes clear that whatever creature was left on the road has spread its poison to the station, mutating into a substantial threat that traps the survivors in the building, pressed to fight a menace that wants to consume their blood.

From the outside, “Splinter” resembles the type of run-of-the-mill horror production that clogs the genre these days. Made on the cheap, sufficiently bloody, and cast with a roster of faintly familiar faces, the picture is nothing groundbreaking. However recognizable the working parts may be, it’s to director Toby Wilkins’s credit that “Splinter” has a pulse and something of an imagination, hurdling over lazy bottom-shelf horror standards to elevate his movie into a crafty, scrappy modest shocker.

With a majority of the action confined to the claustrophobic interior of a backwoods gas station, Wilkins stages the clichés well, pushing his characters into violent corners and observing the survival instinct kick in while they try to elude an indefinable threat in the form of a large mound of mutated bodies, covered in sharp quills used to carry the plague to the next victim. Tension is nicely stoked by the filmmaker, drawing out the suspense with extended set pieces that highlight the characters attempting long shot rescue schemes. Most of the performances liven up the worry, with Constanzo and Wagner relishing their time as onscreen prey. I had more trouble with Whigham, who prefers to emphasize every actor tic he’s capable of producing. Additionally, the performer buries his dialogue under a thick southern accent, making a few important passages difficult to appreciate.

As any reasonable horror movie should, “Splinter” works toward a grand finale to pay off the mounting stress. It’s incredibly disappointing to watch Wilkins rely so much on the ultimate low-budget crutch – the spastic handheld camera – but he redeems this lapse in judgment by constructing a few horror highlights in the last half that are worth the irritating visual discomfort (the gang chased around the store by a severed hand is a gem).

Again, “Splinter” takes a familiar route to scares, but it’s a proficient chiller with a wonderfully short running time (78 minutes), a few bursts of scares, and enough goopy practical effects to stay involved in this unexpectedly sharp monster movie. 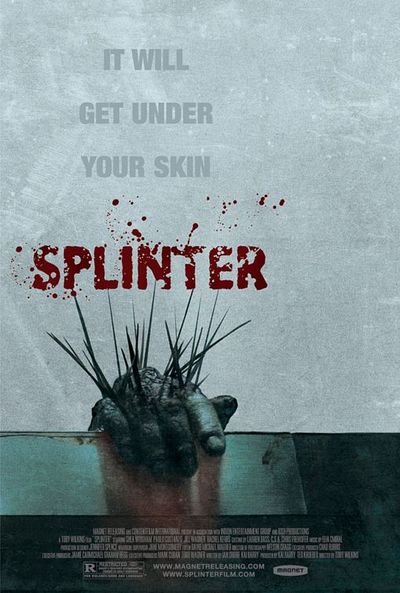