In 2003, the Massachusetts Supreme Court ruled it was unconstitutional to permit only heterosexual couples the opportunity to marry. Practically in the same instant the decision hit the media, the state became divided into two camps: those for gay marriage and those against. Verbal weapons were sharpened, legal counsel was wrangled in huge numbers, and legislators found themselves in the crosshairs with little comfort room to voice an opinion. The ruling (Goodridge v. Department of Public Health) conjured up a storm of controversy that challenged discrimination policies and changed lives forever.

“Saving Marriage” is not an impartial documentary on the topic of gay marriage, it’s an extremely sympathetic film surveying those who crave a basic American right of equality. Directed by John Henning and Mike Roth, “Saving” is a plea for understanding and something of a call to arms, following a few of the lives directly involved with the Goodrich ruling as the political mumbo jumbo elongated the trial of gay marriage legalization for nearly two years.

Once introduced, the Goodrich ruling was quickly put into an 18-month-long holding pattern awaiting a definition-challenging Constitutional Convention, and during this time the Massachusetts political landscape was rocked by the new cause. “Saving” focuses on this excruciating waiting period, shadowing gay and lesbian groups scrambling to preserve this hole in the discrimination fence, either through heartfelt stories of adversity or, as found in the extraordinary case of aspiring State Representative Carl Sciortino (an openly gay man), political chess moves that would narrow the gap between the yeas and the nays for the upcoming vote.

“Saving” hits devastating emotional points when interviewing the couples involved in this gay marriage melee, opening themselves up to pass along their fears of prejudice, share stories of abandonment, and profess hopes for a future of equality. It’s an enlightened bunch of interviewees, contrasted harshly with opponents of gay marriage, who the filmmakers reduce to panicked, clueless warriors of questionable virtue (most bible-powered) who fear for the already heavily fatigued sanctity of marriage. One gentleman, Kris Mineau of the suspect organization “Massachusetts Family Institute,” goes so far as to equate the passing of a gay marriage law with the assassination of John F. Kennedy. And I thought I was a dramatic guy.

Allowed to commence in 2004, gay marriages soon rolled in by the truckloads, with unions granted left and right to eager couples. Turns out the world didn’t explode out of sinful disgust. Even with marriages in place, “Saving” is constructed to treat the end of the 18-month-long state of limbo as a suspense piece, with all the subjects returning to government offices to await a potential overturn. The resolution is now history, but it’s still effective as a nail-biter.

Perhaps dangerously one-sided and too sentimental, “Saving Marriage” is a sincere documentary, enthusiastic to open minds and hearts with its multiple tales of injustice, painting a broader portrait of hope that one day all citizens of America will be lawfully regarded as equal no matter their sexual orientation. 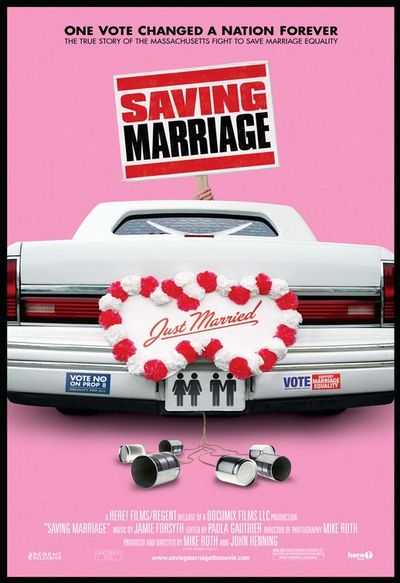