Most audience members stumbling into “Quarantine” will have no idea it’s a remake of a 2007 Spanish horror film titled “Rec.” I can’t blame anyone for their ignorance, since the original picture never broke through to America due to distribution disinterest, and that’s a cryin’ shame. “Rec” was a beautiful chiller, constructed with resourcefulness and genre filmmaking wizardry that instilled a modest concept with the right amount of armrest-ripping content to fuel nightmares for weeks. “Quarantine” is the unavoidable American replica, only this version has ingested a bottle of idiot pills and washed it all down with a full glass of directorial incompetence.

Sent on an assignment to cover a night at the average Los Angeles firehouse, T.V. personality Angela (Jennifer Carpenter) is stuck reporting on the mundane details of fireman life. Becoming frustrated with her botched attempts to add some spice into this monotonous story, Angela’s fortunes change when a call arrives requesting emergency assistance at an apartment complex. Tagging along with her newfound friends (including Jay Hernandez), Angela and her cameraman Scott (Steve Harris) head into the building, only to be quickly sealed in by faceless government officials. Now trapped with angry cops (Columbus Short), paranoid residents (Rade Serbedzija), and an anxious medical professional (Greg Germann), Angela and her roving camera discover the true reason for the quarantine…and it’s hungry for flesh.

There’s nothing broad to be found in “Quarantine” that directly separates it from “Rec.” Director John Erick Dowdle (of the unreleasable “The Poughkeepsie Tapes”) crafts a straightforward copy of the Spanish film, preserving the same plot and scare beats, but altering the corners of the writing to put his fat stamp on the picture. To Americanize “Rec,” “Quarantine” introduces crude sexual tension between Angela and the firemen, and turns our camera-ready hostess from a frustrated lifestyle reporter to a veritable sorority pledge, with Dowdle encouraging Carpenter to play daft instead of confident, ultimately reducing Angela’s role in the overall scheme of things.

The changes are minor, but they do add up, wandering away from “Rec” in all the wrong ways. The original film spent some time with the characters, “Quarantine” quickly sets up the humans as zombie food, with little development beyond differing puncture wounds. “Rec” was a multi-layered visual piece of broadcasting verisimilitude, resembling a chaotic news explosion; the remake retains an unacceptable glossy look, highlighting the already recognizable cast as humdrum actors, not frantic citizens trapped in Hell. Also, while “Rec” didn’t win any awards for steady cinematography, director Jaume Balaguero and Paco Plaza composed carefully for maximum suspense and exposition. Dowdle just throws his camera around arbitrarily, with huge sections of the film lost to inane handheld blur and iffy technical believability. In other words, “Rec” invited the viewer to get lost in the terror. “Quarantine” can’t stop reminding everyone that it’s just a dopey movie.

Reviewing “Quarantine” on its own merits is a difficult challenge, since “Rec” is as close to perfection as fright films get these days. To the uninitiated, the remake will be easy enough to swallow, with plenty of cheap boo scares and hysterical Carpenter overacting to justify the price of admission. For “Rec” fans, there’s no reason to return to this story, since Hollywood has drained the tension away, replacing Spanish innovation with American stupidity. 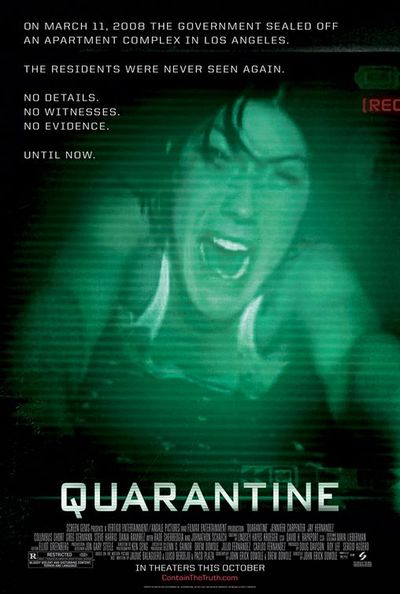 thats why they created subtitles.

Because most Americans don't like to or can't read.

Wasn't this suppose to be a review not a comparison of two films. This movie could suck but I'd rather read a review about the movie; not how it's different from the original.

It's a remake you nitwit. OF COURSE there's going to be comparisions.

Please leave the internet at once.

Infamous Bliker is a fucking retard.

Man, i saw this piece of shit last night at a free screening and I wanted to walk out. my damn GF made me stay.

its a terrible movie, people! Stay away!

I really can't figure out why everyone here in America believes that films from other countries are so far superior. I've seen Jun-on and Ringu and I liked the American versions better. The effects were scarier and not just a person in black face stareing at you.
I also agree that this should have been a film review, not a comparison.
To top it all off "American Stupidity", that's funny. If I'm not mistaken we Americans, of which I'll assume the writer of this article must not be one, pioneered film making, and our Stupid American movies tend to make millions over seas; and before anyone asks I do not mind subtitles.

"If I'm not mistaken we Americans, of which I'll assume the writer of this article must not be one, pioneered film making"

Better check your facts. You are mistaken.

This review is great. I wanted to know what made this different from Rec, and I got it all here.

"I've seen Jun-on and Ringu and I liked the American versions better."

This is why we get moronic remakes. Because of jerkoffs you!

I love to read this stuff: REVIEW THE MOVIE, MAN, NOT THE REMAKE!

What douchebags. How the fuck can you NOT talk about Rec when reviewing this film? It's virtually the same movie!!!

Gawd. Some of you need to be sterilized.

I agree with Mr. Broil. Ju-on and Ringu IMO was not as good as their remakes. The Ring has far better acting and it didn't have that corny "psychic" subplot to it. The Grudge on the other hand was still terrible. I honestly don't think Quarantine will be as good as [REC], no chance in hell man.

OMG! How could Americans remake movies from other countries! It's not like there's a gigantic industry outside America, remaking American movies & TV shows for the rest of the world. Come on, they might call that "Bollywood" or something - such a ridiculous idea! Jeez, it's not like America invented the movie studio and entertainment industry, or everyone uses our movies as high-water-marks for quality!

See, I'm a smug liberal and I just love yammering at my fellow Americans about how stupid they are because they don't want to watch a slow camera pan over an empty building while a French guy moans on about suffering! I don't get that while I'm yakking about how stupid Americans are for not reading subtitles, most movies America releases to the rest of the world have dubbing done in EVERY SINGLE FOREIGN LANGUAGE specifically because most people don't want to read subtitles, particularly in an action or horror film, because they distract from what's going on on-screen!

I'm a smug liberal, and I have to point out how much smarter I think those foreigners are than Americans - except, of course, for me, I'm the exception, the lone smart American in the bunch and GOD I JUST HATE my fellow Americans, they so STOOOPID!

Nevermind that REC was considered a pretty lame movie when it came out. Most people said it just rehashed Blair Witch, was poorly-acted, and had bad effects. See, they used American film ideas as an inspiration to make a lesser product; that's genius! But someone in America daring to take their concept and try to make something! GOD WE SO STUPID!

What the fuck was that about?

I saw this movie this afternoon in an empty theater and I hated every last minute.

Thet acting stinks, you can't see what's going on for half of the movie, the ending is vague.

Quarantine is a shitbox, I just got back from seeing it with my friends.

Terrible movie, it sucks. I should've read this review eariler!

Brian, you should put a copy of rec on your page so we can all see it!

What really bothers me about Quarantine is the lack of an explanation.

At least Rec tried to put a finger on where the infection originated from, even if it slowed down the film.

Quarantine plays it too vague, probably trying to set up a sequel.

[REC] is such an amazing film that one can only laugh at the idea of a dumbed down american remake.

For your information this piece of shit of a rip off is a shot by shot of the original, with the only difference of cutting out the ending, which is what makes the spanish film a classic nightmare inducing masterpiece.

Really disagree here -- and perhaps its because I haven't seen "Rec" yet (though I'm dying to see it).

Found "Quarantine" so much better than most horror films of late. Found the beginning scenes charming and illuminating - here's a flighty news babe thinking she's making must-see tv, and then she's thrown into utter chaos an hour later.

The interplay between the characters is a thousand times better, and more realistic, than the awful film "The Mist," and the film tries its best to justify the camera man who never puts the video camera down for an instant.

I've seen both. The only thing that I liked in Quarantine was the part where they were able to get a signal from a local t.v. station long enough to hear a statement that falsely stated everyone had been evacuated. I thought that added another level of tension, added to the feeling of isolation. Other than that, the film sucked. I was laughing all the way through it. The film making that drew me in and got me feeling involved with REC, was lost entirely. I didn't connect with any of the characters. REC was so much better. Their female lead was so much more believable. She really seemed like she could be from some puff-piece news crew. Carpenter can not act. She did not come off as genuine at all.