“Pride and Glory” is undeniably routine, wading into murky New York police drama waters with little hesitation. However, it takes only a minute to shake off the convention and welcome what director Gavin O’Conner is constructing here: a pummeling story of corruption and relations, spread across the battlefield of the unforgiving city. “Glory” is a marvelous installment of the psychologically tortured cop genre, and whatever it lacks in innovation it makes up in emotionally searing, superbly smashmouth execution.

When four New York City police officers are found dead in an apartment with criminal ties, a task force is assembled to catch the killers. Leading the charge with some reluctance is Ray Tierney (Edward Norton), a timid cop brought back into fold of the homicide squad to join his father Francis Sr. (Jon Voight), brother Francis Jr. (Noah Emmerich), and brother-in-law Jimmy (Colin Farrell). Gathering clues, Ray tugs at a string of corruption running through the department, a string tied to Jimmy and his elaborate schemes to cover his crooked path. Once the investigation starts to unravel the force, it places Ray in a difficult position, compelled to choose between the tolerant police code of his family and the demands of justice.

Shot splendidly with crisp winter bite by cinematographer Declan Quinn, “Pride and Glory” sends the viewer into the jaws of the city, where the battle between cops and robbers is a messy pursuit, often pushing the patience of the law to unfortunate ends. O’Connor uses the bitter streets as a chess board for this sprawling family story, mixing the irritability of domestic troubles with a developing sense of procedural misery as Ray inches closer to a suspect he can’t bring himself to arrest. “Glory” is one of those massive Shakespearian clashes between aggressive relatives burning through long-held feuds, yet O’Connor doesn’t indulge in the hysteria of the moment; instead, he prefers to observe growing, unavoidable despair.

Gathering a group of hot-blooded Irish cops to play around with the topic of corruption doesn’t slow down O’Connor’s imagination. The director appreciates the formula and spends two hours trying to subvert expectations with impressively composed character interaction and harrowing scenes of emotional fragility. “Glory” is about the cops, not the crimes, and how they cope with themselves when they’ve accepted their compromise of honor. Everyone has their cross to bear, and O’Conner maintains the boiling points masterfully: Ray is weary, lonely, and persistent with his investigation; Francis Jr. has worked hard to reach a level of authority, only to see his force succumb to the temptations of crime, not to mention nursing a wife (Jennifer Ehle, in a ghostly, heartbreaking performance) stricken with cancer; Francis Sr. watches helplessly as his sons walk away from the league of cops he romanticized (a boozed-soaked holiday scene with the character admiring his family is the film’s finest moment); and Jimmy is the desperate outsider, building a future for his family on dangerous ground, soon consumed with paranoia as suspicion falls on his men.

Winding through a series of harrowing turns in the investigation, horrific scenes of interrogation, and the psychological torment inflicted on the accused, “Glory” works itself up into a suffocating lather. O’Connor works hard to construct a tight web of police lingo and tough guy posturing; if your antennae are tuned to this sort of cinema, “Glory” is a superlative demonstration of a brotherhood-of-the-badge stranglehold, rooting itself in outstanding character composition to alleviate the worry of cliché. It’s a wonderfully compelling drama, bruised to near-perfection.

O’Connor gives himself over to frenzy for the final act, and the slip in judgment dents the film’s overall impact. In keeping matters intimate, “Glory” is able to pass off impressive composure which bleeds into sharp flashes of violence. Once the action hits an unsteady, frantic level of streetwise panic, the picture loses layers of authenticity in its pursuit of a blockbuster closure. O’Connor finds a few knuckle-sandwich surprises within a deflating final reel, and it’s enough to work the lapse in judgment down. It’s a small piece of unnecessary indulgence in an otherwise exceptional, thick-skinned cop drama. 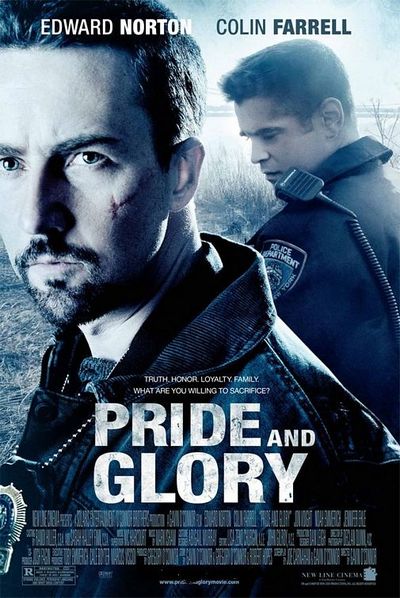 I'm glad to hear a glowing review of this film. I was worried, because "High School Musical 3" and "Saw" are borderline and glorified pieces of crap. I mean, Zac Efron and Vanessa Hudgens are two of the most overrated actors ever (the former could make Hayden Christensen look like Robert Deniro, while the latter isn't anything speacial), and "Saw", despite the presence of accomplished character actor Tobin Bell, is best left to sadistic, mouthbreathing fratboy fucks (I love Pajiba for that hilarious comment about "Captivity").