85 minutes long, rated PG-13, released by Fox, directed by John Moore, and a screenplay based on a video game. That’s a recipe for disaster, and “Max Payne” is more than happy to fulfill its destiny as a noxious actioner devoid of humanity, elementary cinematic language, and thespian nuance. Once again the game world collides with the multiplex, and once again I question the point of taking an interactive experience and turning it into a conventional feature film, omitting the specificity that made the property viable in the first place.

Mourning his dead wife and baby, detective Max Payne (Mark Wahlberg) has spent the last three years hunting the killers who tore apart his idyllic life. After a chance meeting with a Russian prostitute (Olga Kurylenko), a clue is left behind by her gruesome death, leading Max closer to an energy drug that produces hallucinogenic visions of demons, the possible motive behind the slaughter of his family. Finding little help from former colleagues (Beau Bridges) and police officers (Chris “Ludacris” Bridges), Max forms an alliance with assassin Mona Sax (Mila Kunis), and the two set out to uncover the mastermind behind a recent rash of murders, possibly leading to the solution of Payne’s case.

What John Moore brings to the artistic table is visual fetishism. After “Behind Enemy Lines,” “Flight of the Phoenix,” and “The Omen” remake, Moore has proven himself a meticulous screen stylist, preferring a glossy moment of violence over anything resembling a legitimate emotional reaction. A former commercial director, Moore hasn’t bothered to warm up his touch over the years, leaving “Payne” a soulless exercise in empty calorie filmmaking; the background lighting and set design continually take precedence over the actors and ultimately whatever story manages to survive the creative malnourishment.

Moore treats “Payne” as another polished cinematographic playing field, imagining a world where the snow never stops falling (a noticeable continuity nightmare), the locations are ripe with noirish lighting, and the streets are guarded by psychological demons of the night. Moore demonstrates outstanding control over his environments, but holds no fundamental storytelling instincts, spending all of his time perfecting the shots while an entire film leisurely strolls past him with almost nothing to do but stand around and look confused. Moore fumbles “Payne” immediately, excessively clowning around with hackneyed camera and post-production technology, leading to a full mummification of the picture from the surplus of strained gimmickry.

I’ve only played the “Payne” video game once, and while it satisfied my home console blood thirst temporarily, it certainly didn’t scream out for a feature-length film adaptation. Screenwriter Beau Thorne is hopelessly lost trying to dream up a furious, elongated road for Payne, instead falling back on the most eye-rolling scripting clichés to pass time between the action beats Moore works himself into a lather to cover. Corporate conspiracies? Deceptive friendships? Gorgeous 90-pound female professional killers? Surely there could be more to the “Payne” universe than scraps from the “CSI: Miami” reject pile. Thorne barely eeks out a coherent tale of revenge for our hero, forgoing valiant scripting imagination to serve up the same old double-crosses and seedy criminal underworlds.

It should come as no surprise that Moore is terrible with actors as well, ignoring their needs to feed his own plastic precision. The cast is a fairly strange assortment of faces, with Chris O’Donnell, Donal Logue, and Nelly Furtado completing a miscasting arc that includes Kunis, Ludacris, and ultimately Wahlberg. Doing his now infamous tough-guy stance, Wahlberg sleepwalks through “Payne,” effectively erasing the reputable work that actor has been putting forth recently. It’s tough to fault Wahlberg for his blank stare, since he’s competing with Moore and his slackjawed lust for pointless slow-motion, shattering glass, and sexualized bullet discharges.

Coming on the heels of last year’s woeful “Hitman” adaptation (oddly, also starring Kurylenko), “Max Payne” further dents the questionable concept of the big screen video game celebration. Here’s the ultimate question: would you rather play out the violent wrath of Max Payne or watch some lousy filmmakers turn the world into mounds of formulaic drivel? 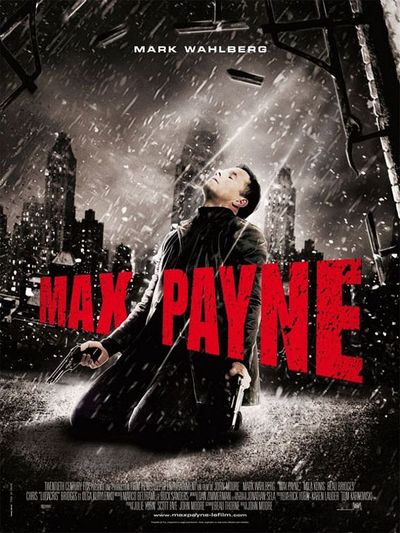 Here's the thing: Max Payne could have been a n excellent if they had not changed the video game's plot a bit. I've read the movie script, and it's absolutely terrible. Every change they made was a bad change. Video game adaptations CAN be made into good movies, if handled correctly, but an 85-minute, chopped up script that adds things the game never had and leaves out vital elements the game DID have...THAT is your recipe for disaster. Did you play the entire game? Max Payne had an incredibly good storyline and plot. This adaptation was a joke, and not because it was based on a video game, but because they made random, retarded changes.

Blah, I meant to say it could have been an excellent movie.

Thanks Jim, you saved me a rant. I totally agree with everything you said. This could and should have been an awesome movie. Oh well.