Film Review: Let the Right One In

From Sweden comes “Let the Right One In,” a film of extraordinary mood and wildly inventive directorial potency. It’s a hushed, gentle story of provisional friendship, the ordeal of adolescence, and the curse of vampiric immortality. A hypnotic motion picture from beginning to end, “Right One” is a marvel: an ingenious genre film that manages to terrify and endear in the same instant, deftly erecting one of the most persuasive, haunting film experiences of the year.

Bullied at school, 12-year-old Oskar (Kare Hedebrant) dreams of revenge on his classmates, spending his hours wandering around his snowbound apartment complex. One night he meets Eli (Lina Leandersson), a mysterious girl of the same age with whom he strikes up a tentative friendship. As the two learn more about each other, it becomes clear that something is killing off the paranoid residents of the community, but to Oskar, Eli is his friend and confidant, with powers and history he doesn’t understand. To Eli, Oskar is a rare innocent soul worth protecting, finding peace in his company and encouraging the boy to stand up to his enemies. Together they bond while the world around them quickly spirals out of control.

While already targeted for a U.S. remake, “Right One” (adapted by John Ajvide Lindqvist from his own novel) holds distinct European appeal I seriously doubt could withstand an attempt at crude Americanization. For starters, “Right One” observes brutality and naive sensuality involving pre-teens, it treats death with a certain frightening visual poetry, and this Swedish film is something of a masterpiece, directed with exceptional tonal control by Tomas Alfredson. The plot concerns vampires and blood-spattered splendors of the flesh, but it’s one of the most endearing and sweetest movies I’ve seen this year, embracing hesitant friendship with total commitment to character nuance and storytelling serenity.

“Right One” is consumed with mood, drinking in long takes of behavior and staging the action around stark snowscapes, photographed with brilliant menace by Hoyte Van Hoytema. Fearful of losing his audience at the first sign of distress, Alfredson brings Oskar and Eli together gradually, introducing bloodshed without proper explanation to drill the proper psychological holes that pay off later in the picture. Eli being a vampire is not the twist of “Right One,” it’s the opening chapter for Alfredson to play extensively with images of fright and themes of isolation, revealing the girl to be an ancient soul longing for companionship within a life that requires immediate viciousness. The director lets the uneasy sympathy grow from there, enhanced by the heavenly performances from Hedebrant and Leandersson, who never betray their years, making the central relationship awkward, exploratory, and enduring in ways that tap directly into the senses.

Time away from our leads is just as rewarding, though viewed with more overt genre trappings, executed with stunning Kubrickian precision and stealth by Alfredson. Once Eli’s thirst encourages deadly curiosity from the tenants, all hell breaks loose, removing the ambiguity of “Right One,” but replacing the question marks with eye-popping turns of fate.

“Right One” has such an appealing, candid purity about it that contrasts with the violence on a spellbinding scale. The film takes astounding chances with characters, asking viewers to accept a form of evil (a child, no less) as a welcome presence worthy of compassion. The picture also contains a knockout resolution that solidifies Eli and Oskar as the preeminent screen couple of the year.

Grotesque, unnervingly gentle, forbidding, and ethereal, “Let the Right On In” not only reenergizes vampire cinema, but it also restores faith in the concerns of pre-teens. This is one of the best pictures of 2008, and anyone feeling a little punch-drunk from the stale art-house norm owes it to themselves to seek out this stupendous, bizarrely heartwarming genre bender. 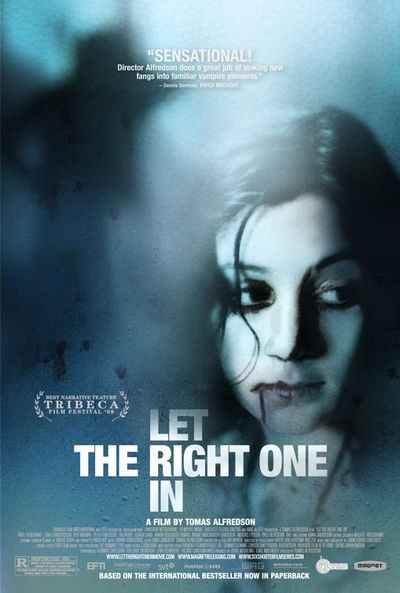 saw this last friday. definitey agree with the reviewer.
Subtle and horrifying in equal measure.
sweet and cruel at the same time
brilliant.

This is a rare gem, an english remake will not do it justice, many foreign movies are remade and are never in the same realm. Hollywood sucks at doing most things, I should know, I worked in that lame industry for over ten years. Many things are rehashed by Hollywood, there are few good writers in that town.