As a comedic performer, there are few as sharp as Simon Pegg these days. However, Pegg was introduced to American audiences through witty, intelligent productions such as “Spaced,” “Shaun of the Dead,” and “Hot Fuzz.” Now established as something of a leading man, Pegg’s career has swayed toward more predictable fare, lacking the assured punch expected from such a talent. “How to Lose Friends & Alienate People” joins the recent “Run Fatboy Run” as material below Pegg’s capability, but nevertheless held together by his growing starpower.

Running a mean-spirited entertainment magazine in London, Sidney Young (Simon Pegg) is brought to America by publishing magnate Clayton Harding (Jeff Bridges, a comedic sniper) to hobnob with the rich and famous and write puff pieces. Eager to make his celebrity acceptance dreams come true, Sidney is paired with Alison (Kirsten Dunst) to learn the ropes, soon falling under the spell of spoiled young star Sophie Maes (Megan Fox). While developing a tender relationship with Alison, Sidney tries to keep some semblance of journalistic credibility present, but it’s a losing battle with controlling publicists (Gillian Anderson, hamming it up pleasingly), devious rivals (Danny Houston, who doesn’t possess a funny bone), and his own thirst for success slowly turning him into his own worst enemy.

Based on Toby Young’s memoir of his time in the Vanity Fair trenches, “Friends” plays like a male version of “The Devil Wears Prada,” with the requisite attention to sex jokes and cursing. Directed by Robert B. Weide (“Curb Your Enthusiasm”), the material has been dumbed down to a sitcom level, defanging Young’s adventures to fit modern romantic comedy standards. There’s a sizable amount of talent involved with “Friends,” but the feature is overcooked and programmed too predictably, never permitted to break away and enjoy itself.

Some impulsiveness is offered from Pegg, who assumes most of the comedy burden within “Friends.” Playing fish-out-of-water with palpable delight, Pegg enjoys the contrast, eagerly lampooning English tabloid types forced to play by American rules while permitting himself plenty of space to goof around with slapstick. Emboldened by the film’s shocking acceptance of an R-rating, Pegg rolls around in the filth, selling the bejesus out of the pedestrian sex and gross-out selections of comedy that quickly take precedence over wit. Pegg is a source of energy the film would be nothing without. He’s so sharp and game for anything, it bewilders his co-stars, especially Dunst, who can’t keep up with the pace.

Lose Pegg, and “Friends” deflates completely, sleepwalking through contrivances and plastic sentiment the direction only marginally bothers to build a foundation for. “Friends” is conventional, but, even worse, it’s sleepy, unable to muster the vigor to embark on a romantic comedy with genuine verve and a heartrending moment or two. The feature is disjointed and Pegg and Dunst share little chemistry to build a story around. The less said about Fox the better; her character being one of the many unfinished satirical jabs “Friends” abandons to make an agreeable running time.

I doubt anyone will care if Sidney finds vocational comfort, or even his romantic ideal. The plot of “How to Lose Friends & Alienate People” is not a creature that compels the audience to sit patiently as narrative ends are tied together. It’s a silly film halfheartedly imagined, worth a sit only to watch Simon Pegg run amuck inside another movie that doesn’t deserve him. 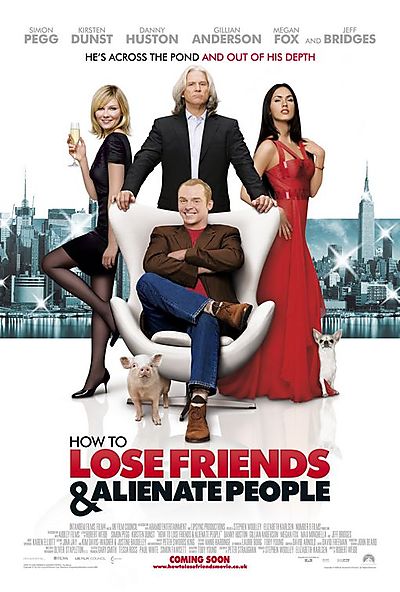