Forced to walk a difficult release path since its ill-fated Sundance debut in 2007, “Hounddog” has been reworked and purged of its sins, hoping to drop the unofficial title “The Dakota Fanning Rape Movie” and move on to more promising assessments of quality beyond the superficial. While accusations of sensationalism are unfounded, “Hounddog” remains a crude, tedious affair, providing some insight as to why the film was ignored nearly two years ago and why it should remain so today.

A young North Carolina free spirit, Lewellen (Dakota Fanning) spends her day romping around the backwoods, avoiding the stern punishments of Grammie (Piper Laurie) and her father (David Morse), while dreaming of Elvis and his musical liberation. A pre-teen on the verge of womanhood, Lewellen is unaware of her burgeoning sexuality, attracting the attention of lecherous boys while trying to sort out her own domestic troubles. When a sexual assault robs Lewellen of her innocence, the girl turns to her African-American neighbor Charles (Afemo Omilami) and his affinity for the blues to help her out of her depression.

“Hounddog” is the Dakota Fanning show, allowing the actress the rare opportunity to blaze through her range of emotions in a blitzkrieg Oscar-baiting performance that features no discernable off button. With her youthful demeanor now transitioning to teenage angst, Fanning’s artistic limitations are beginning to show. She’s a highly trained actress, not the emotive, broodingly method wonder “Hounddog” needs to best examine the psychological damage being inflicted on Lewellen. Fanning resembles an acting robot: stick a quarter in her head and she’ll dial up any reaction in the book, absent the needed gravitas. Instead of a tragic character with limited ability to recognize the malice pushed upon her, Lewellen is twisted into a soulless plastic doll through Fanning’s interpretation, using dramatic moments not to build a character, but to pad her clip reel for future acting gigs. I found it impossible to sympathize with Lewellen with Fanning pushing so hard, positing herself as the next Meryl Streep. I hope Fanning learns self-control one day.

While Fanning’s performance evaporates into absurd levels of indication, writer/director Deborah Kampmeier blows her end of the deal by creating a story that doesn’t have anything to say. A coming-of-age journey, “Hounddog” is extremely episodic, bouncing all over Lewellen’s world in increasingly irritating and unintentionally hilarious ways. The loss of innocence is perhaps the main vein of thematic exploration, but Kampmeier isn’t focused intently enough, struggling to cover the larger canvas of Lewellen’s family woes, including a strange aside that features Morse’s gruff character being struck by lightning and transformed into an imbecile. Already a cringingly limited actor, try to imagine Morse prancing around in the nude, doing his best Forrest Gump impression, with his bangs cut to match Lewellen. It’s a horror show.

Climaxing with a symbolic spread of serpents and the miraculous touch of backdoor blues, “Hounddog” is making an effort to communicate the soul-rattling release of guilt and adolescent anguish, but there’s no concrete context for the purging. “Hounddog” instead feels disengaged, losing perspective at nearly the very moment it begins. 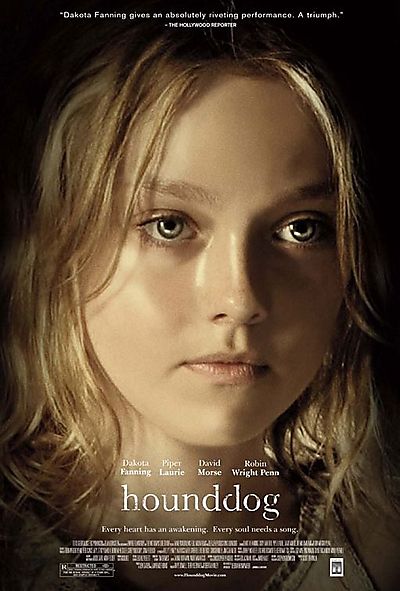