Presenting a movie like “High School Musical 3: Senior Year” to film critics is a bizarre situation. Let’s be real here: nobody who wants to see the feature will care what other people think about it, and most strangers to the “HSM” franchise wouldn’t be caught dead watching it. It’s an either ya do or ya don’t proposition.

It’s the senior year for the East High Wildcats, and futures beyond high school hallways and lunchroom gossip are being planned. For Troy (Zac Efron), Gabriella (Vanessa Hudgens), and Chad (Corbin Bleu), the road to adulthood is complicated, involving painful choices in both life and love. With the year winding down, Gabriella encourages everyone to sign up for the spring musical, putting the kibosh on brat Sharpay’s (Ashley Tisdale) plans to topline her own show, with supplementary help from brother Ryan (Lucas Grabeel). With the days ticking away to graduation, the group works out the moves for the big show, while Troy and Gabriella contemplate the concept of college careers away from each other.

I only recently came into the “HSM” franchise, and, believe me, it was kicking and screaming. However, what I discovered under the toxic Disney marketing blitz was an exquisitely candied, wholesome series of dance movies, reinforced with exceptional choreography and performances marked by thousand-mile-wide smiles and nimble footwork. The first two Disney Channel “HSM” installments were earnest and cheery, qualities that matched their small screen origin wonderfully. It’s the multiplex for “HSM” this time out, for financial and sentimental reasons that make perfect sense. It’s a pleasure to report that “Senior Year” is a lovely send off for the original cast of the series, giving the core audience exactly what they crave from an “HSM” film, only now director/choreographer Kenny Ortega has a few more bucks to spend indulging his glittery imagination.

The upgrades to “Senior Year” are felt immediately, with more intricate lighting schemes around East High and on the stage, sophisticated production numbers for the cast to tumble around in, and the introduction of three new cast members to take over for the inevitable “HSM 4.” It feels a tad underhanded to pipe in new characters within a film created solely to say good-bye to audience favorites, but that’s how Disney business struts, baby. It’s a shame the new Wildcats, Tiara Gold (Jemma McKenzie-Brown), Jimmie Zara (Matt Prokop), and Donny Dion (Justin Martin), are exceptionally uncharismatic clones, leaving their scenes a slow death in an otherwise peppy film.

Beyond the new faces, “Senior Year” plays like an amplified version of the previous “HSM” films. The songs, while remaining frightfully glossy and generic, reach out a little further to express romantic sentiments and troubled thoughts. The dancing is plunged into with a generous hunger (the Efron/Bleu junkyard sequence for “The Boys Are Back” is a real triumph); Ortega channeling the gods of Berkeley, Fosse, and Kelly to construct intricate foot parades for the camera, with special emphasis on theatrical scenery to reinforce the high school musical atmosphere of “High School Musical” (something that was woefully missing from “HSM 2”).

The cast also seems to have their batteries charged to capacity, especially Efron (he of greasy hair and bulging muscles) and Hudgens (she of inviting smiles and virginal hypnosis), who return to the forefront of this final installment with a syrupy relationship arc that puts pressure on the Troy/Gabriella pairing. To college or not to college isn’t a fresh pathway for drama, but “Senior Year” gets surprising mileage out of the difficult choices that face our heroes. It’s a thoughtful way to break up the hyperactive dancing, even if it isn’t challenged beyond the norm.

Ortega is wise to lead “Senior Year” down familiar roads for the fanatics, showcasing enough electric showmanship, shirtless Efron, and tearful farewells to supply the faithful a sizable reward for their loyalty. All the essentials on are display, just widened and softened a bit for the big screen.

Living in a moronic “Step Up” world of drearily sexualized hipster dancing and manufactured anti-establishment attitudes, the skim milk allure of “HSM” is appreciated, offering something of a throwback to the sunny day spirit of a Garland/Rooney musical. “Senior Year” has a genuineness about it that’s wonderful to observe and provides the original cast a platform for a marvelous, bouncy final bow. 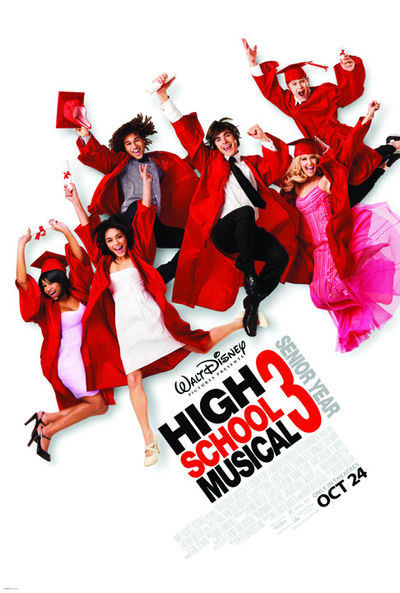