Behold, the sordid, twisted tale of…the intermittent windshield wiper! While a kindly underdog story, “Flash of Genius” is digging pretty low for a concept that could sustain the inspirational cinema treatment, and the picture shows unmistakable fatigue trying to scrounge up a roller coaster ride concerning underhanded automobile industry practices.

College professor and inventing enthusiast Robert Kearns (Greg Kinnear) has come up with a motor that runs windshield wipers automatically, removing the aggravation of drivers forced to control the rain-clearing action on their own. Excited about his invention, Robert, with friend Gil (Dermot Mulroney), takes the wipers to the major automakers, hoping to score big and take care of his large family, including supportive wife, Phyllis (Lauren Graham). While Ford takes on Kearns, pushing him into years of development and encouraging plans for a factory of his own, the company soon realizes keeping the inventor around isn’t good for business, eventually ignoring him and canceling his dreams. Years later, when Robert discovers his design on a new line of automobiles, he engages in a legal fight to protect his patent that would come to test the boundaries of his marriage and his own sanity.

“Flash of Genius” is a routine motion picture, but it tells an interesting story on a unique subject. Making his feature-film directing debut is Marc Abraham, and he treats the Kearns saga with all the dramatic grease of a television movie, practically leaving room for the ample commercial breaks. That’s not to say “Genius” is wearying, just not cinematic, observing the wiper fiasco from a safe, predictable distance, and coloring the combatants with obvious shades of right and wrong.

“Genius” is a difficult film to tackle. Certainly Kearns’s legal war is the stuff of benevolent melodrama, witnessing the broken man spending years trapped in a courtroom fight with a giant of industry, bursting with enough money to wear the inventor down. The ingredients are there for reliable, audience-pleasing theatrics, and “Genius” holds a handful of moments that do provoke a genuine reaction. However, the overall experience of the film is one of predictability, not passion. Abraham doesn’t push the film along with a generous spirit, instead leaving the clichés to do all the heavy lifting, while glossing over the more unsavory elements of Kearns’s real-life experience. The director shows promise with visual mood and dramatic payoff, but Abrahams isn’t brave enough to really charge up the material, missing a golden chance to showcase Kearns’s combat as the stuff of stand-up-and-shout cinema.

Greg Kinnear’s work as Kearns is a nicely shaded characterization in an often obvious film. Playing up the inner struggle of a man kept from his discovery, Kinnear is terrific at embodying the character as an average family provider and the wronged inventor, losing his grip on reason as the corporate vultures swoop in. As the emotional center of the piece, Kinnear is well cast, but often restrained by the negligible direction. He’s matched perfectly by the always welcome Lauren Graham, who makes something gentle out of her forgettable reassuring spouse role.

“Flash of Genius” is appealing, and while the story is an odd one, it remains an intriguing observation of underhanded corporate business practices told through formulaic melodramatic trappings. It’s up to the individual viewer if something thin like this is worth an expensive evening at the movies. To me, “Flash of Genius” seems like the perfect DVD rental night. 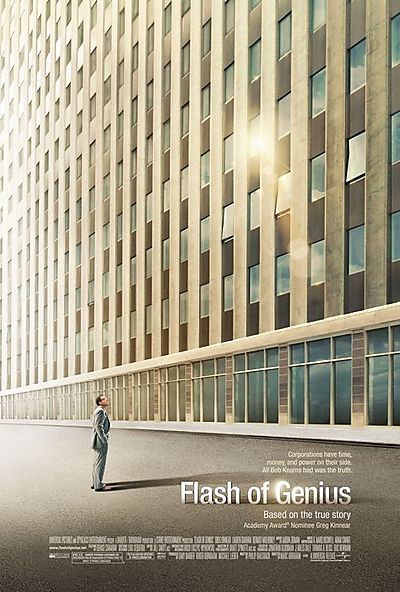