“City of Ember” is a sci-fi fantasy film with forbidding apocalyptic overtones, extravagant set design, and an edge that mixes high-flying questing with significant ecological worry. It’s a film Terry Gilliam used to make before his artistic abilities flatlined: a striking adventure for families that dares to challenge the senses with atmosphere that isn’t always sunny, backstory that isn’t neatly cubed for mass consumption, and youthful performances that attain dramatic weight. Even housed in an imperfect cut, “City of Ember” is one of the best family films of the year.

While the world neared the end of days, the nameless Builders took humanity underground, erecting the city of Ember: a community powered by a massive hydro-electric generator and ruled by a series of mayors (Bill Murray, in dramatic mode). Now over 200 years old, Ember is falling apart with generator malfunctions that leave the citizens in the dark for frightening stretches of the day. Trying to fit into their newfound professional roles in Ember, teens Lina (Saoirse Ronan, “Atonement”) and Doon (Harry Treadaway, “Brothers of the Head”) submit themselves to the numbing grind of the city, only to come across an escape plan left behind by the Builders. Racing against the clock, Lina and Doon attempt to decipher the written code before Ember self-destructs, stumbling upon a great deal of governmental corruption they can barely believe.

Adapted from the popular novel by Jeanne Duprau, “City of Ember” is a terribly condensed motion picture. A natural flow of story is absent from the movie, as director Gil Kenan (the charming “Monster House”) and screenwriter Caroline Thompson try to maintain a ripping pace to Lina and Doon’s underground discoveries. The price for this brevity is a loss of epic scope, reducing “Ember” to breathless exposition without the desired time to sit down and take inventory of characters, motivations, and this incredible world. While I haven’t read the Duprau book, the film appears pared down from a longer, more patient cut, especially around any plot details that dwell on the adults of Ember (including Tim Robbins, Martin Landau, and Mary Kay Place).

Narrative shortcomings aside, “Ember” packs quite a visual punch, courtesy of Kenan and his gifted crew. Shunning a potential torrent of special effects, the actual city of Ember is built on stages, giving the screen beautiful scale and an impression of reality that’s crucial to embracing a grave movie like this. It’s a colossal production, and the effort exposed in the Gilliamesque (or perhaps Jeunet and Caro) details is remarkable, with terrific rusted and soiled landmarks, along with the weathered, knitted look of the Ember inhabitants. Kenan masterminds a real world for the audience to invest in, and “Ember” is simply gorgeous to behold, if you like your kid movies with a little more bruising than normal.

The second half of “Ember” is pure action mode, following Lina and Doon as they make a break for the outside world. After a period of expositional bondage, the film takes off like a rocket as our heroes climb all over Ember’s hidden passages, board a potentially life-threatening flume ride, and search the tattered map for the secrets their cryptic ancestors waited an eternity to reveal (shades of “The Goonies”). Obviously, with the heart pumping and Kenan permitted to embrace more fanciful visuals, “Ember” starts to come into its own.

Without spoiling anything, “Ember” closes on a wonderfully poetic note, unusual for a family film and positively foreign to me after last week’s reprehensible “Beverly Hills Chihuahua.” Offering a powerful metaphorical presentation of life under environmental pressure, superlative performances from the cast (Ronan is a gifted actress), and visual gymnastics that return a sense of awe to the movie theater, “City of Ember” might be short on narrative depth, but it’s long on satisfaction. 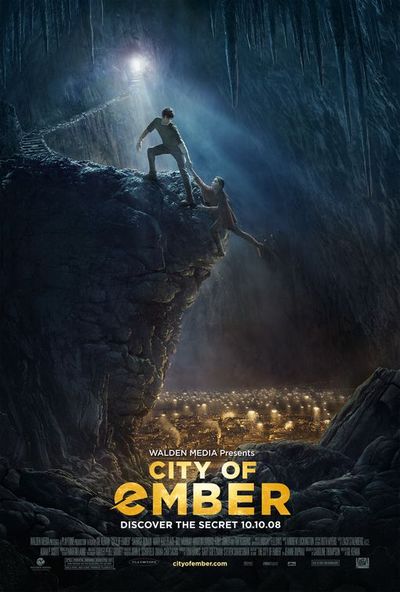