Contrary to popular opinion, “Changeling” doesn’t represent director Clint Eastwood fishing for Oscar gold. Instead he’s made what he usually makes: a sturdy drama with wonderful working parts, only now there’s an issue of length that’s disconcerting, and stretches the movie to a point of no return. “Changeling” is compelling and flush with outstanding period detail, yet it can’t locate the brakes, skidding from nail-biting tension into watch-checking boredom all too easily.

In 1928, Christine Collins (Angelina Jolie, all porcelain skin and worry) is trying to make ends meet as a single mom, hoping to make time for her young son, Walter. Returning home from a last-minute shift at the phone company, Christine arrives to find Walter missing without a trace. Turning to the LAPD, Christine finds comfort months later when Detective J. J. Jones (Jeffrey Donovan) swears he’s found Walter. Delight turns to horror when Christine meets the boy the LAPD is pushing on her, and he’s not her son. Questioning the tactics of the police on an escalating scale of hysteria, Christine is placed in a mental hospital, while sympathetic Reverend Gustav Briegleb (John Malkovich, doing a superb take on annoyed heroism) uses his power to challenge the LAPD and expose their epic web of deception.

The first striking element of “Changeling” isn’t the suspense or the performances, but the look of the film. With top-shelf production efforts from everyone involved, “Changeling” settles into an evocative mood of Depression-era L.A. without missing a beat, studying a time of power and corruption in a shifting landscape of trust. Eastwood holds fondness for the era, bathing the film in noirish flavors and a haunting costume design that seems to imprison the characters in their own wool-based misery. If there’s one thing to savor about “Changeling,” it’s the graceful way it transports the audience, bringing them to this famous time and place with traditional Eastwood ease.

On the surface, “Changeling” might appear to be the Angelina Jolie show, permitting the actress ample room to clomp around chewing the scenery in a role that practically begs for teary showboating. The screenplay by J. Michael Straczynski (“Babylon 5”) only uses Christine’s perspective of loss as a jumping off point to sort through stories of police violation and serial killer psychosis, and the burden of so many tangents distracts the pace of the film, which needs 140 minutes to clear Christine’s pain out of its system. It’s not the actual length that bothers me as much as it’s the sickening feeling that Eastwood isn’t being his typical judicious self. Once matters move past the cracking first act, “Changeling” starts to feel indulgent with performances and exaggerated in plot.

The introduction of Walter’s possible abductor, Gordon Northcott, takes “Changeling” away from Christine and turns on the procedural afterburners. This already bleak tale grows even darker when clues leading to the possibility of murder are introduced, but Jason Butler Harner’s wince-inducing interpretation of Northcott’s psychosis blocks the film’s reach to develop a full circle of trouble. Suddenly, “Changeling” goes from a taut, emotional suspense film to a laughably overacted, needlessly melodramatic bid for complexity. As the picture rolls on covering every last step of Christine’s case and ordeal inside a nightmarish psychiatric ward, it saps the energy and disorients the once intoxicating intimacy of her battle against impossible manipulation.

As a classically crafted drama, Eastwood isn’t wasting time with subtlety, using Christine’s mental torture to rile up the audience with a steady stream of humiliations and doubts. It’s only when “Changeling” wants more to gnaw on does the film start to crawl, following the story to its logical end point, which unfortunately happens to be about 30 minutes longer than the film can sustain comfortably. 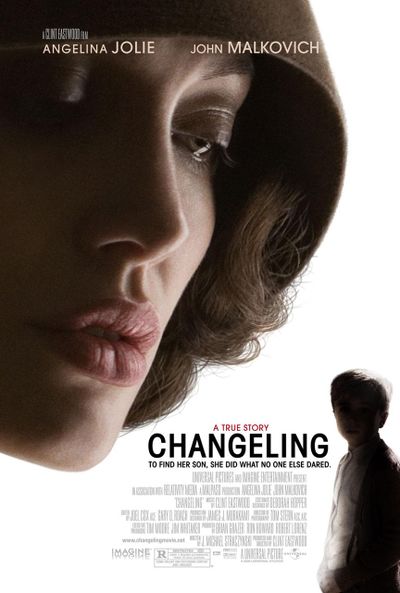