To shamelessly purple nerple a popular catchphrase: “What happens in depressing, unfilmable novels stays in depressing, unfilmable novels.” “Blindness” is a great candidate for the annual “did we really need this?” awards; it’s a dreary jumble of social criticisms and fear mongering that seems perfectly suited to the limitations of a short film. Instead the picture is elongated to a punishing two hours of suffering, infuriatingly slavish screenwriting, and a director who should be gifted the miracle of a tripod this upcoming holiday season.

Out of nowhere, a pandemic of blindness has struck a major city, turning the controlled chaos of life into complete disorder. When the illness hits the home of Doctor (Mark Ruffalo), he’s sent to an abandoned sanitarium under Government control, with Wife (Julianne Moore), who remains sighted, along for support. Making a home out of the rancid conditions with a group of the infected (including Danny Glover, Don McKellar, and Alice Braga), trouble looms when an overflow of people are forced to create a society in the sanitarium, leading to gang mentality, ruled by the imbecilic Bartender (Gael Garcia Bernal). While Wife tries to keep her duties in order while hiding her sight, the visions of hell before her are too much to bear as she clings desperately to hope in an increasingly hopeless world.

“Blindness” is adapted from the 1995 novel by Jose Saramago, a piece of writing that I’ve never had the pleasure of enjoying. I come to the film as an outsider, without the comfort of the writer’s time and energy creating a catastrophic world. As a viewer, I’m left only with Don McKellar’s screenplay and the overbearing direction of Fernando Meirelles (“The Constant Gardener,” “City of God”), and their redundant efforts to massage the complicated prose into a reflective big screen experience.

I found “Blindness” to be an exhaustively uneven endeavor, buttressed on waves of discomfort that somehow evade their lofty psychological goals and sputter into sheer ugliness. A statement on the disintegration of humanity and the house-of-cards foundation of our infrastructure, “Blindness” is a stormy end-of-days dramatic exclamation point. Meirelles is cautious with the hysteria, building, to some success, a rippling effect of doom as eyes begin to fail the populace and pandemonium seizes control. The medical community is clueless, the government useless, and citizens are forced to turn on each other to make it through the day. It’s a customary arrangement of narrative doomsday devices and it gets the picture up and running as a gloom piece, eager to unnerve the public with a glimpse of authentic bedlam, augmented by the frightening absence of vision.

However compelling the set-up is, “Blindness” quickly eradicates the tension by reducing the epic vision of the world into a microcosm, shoving the characters into a claustrophobic, filthy place of sanitarium isolation to best observe their sightless trials of humiliation. Order is made through the kindly efforts of Doctor, only to be torn to shreds by the gun-toting Bartender, and Meirelles gobbles up the tension through self-conscious, jittery camerawork (his calling card) that replicates the “white blindness” the characters are afflicted with. In fact, the filmmaker pays more attention to his mood and lighting than the narrative, which reduces “Blindness” to awful spasms of illogic.

Wife has sight, trying to fulfill a sense of martial duty for her husband and those who reside in her ward while trying to keep her “gift” a secret. McKellar and Meirelles have an opening here for raw nerve content, tracking Wife and her mounting worries as she observes the sanitarium lost to the effects of starvation, disease, and immorality. The disturbance within Wife is palpable and underlined quite clearly, yet her reactions are inexplicable to a point of madness. Sticking so close to the source material, the filmmakers completely mangle logical motivations for Wife. Witnessing Bartender and his Canadian actor gang (including the always one-note Maury Chaykin) extort the inhabitants of the sanitarium for precious food, leading to mass rape and brutal beatings, it’s never explained, hinted, or questioned why Wife doesn’t attempt to defuse the situation using her sight. She’s a silent witness to outrageous intrusions of violence, yet sits there even after sequences reinforce her irritation. Perhaps the novel was more skilled at required psychological penetration, but the film is a fearlessly irrational, incomprehensible mess, seeping into other sequences of infidelity and antagonism that have no foundation in reality, just clouded, infuriating storytelling in an already overlong motion picture.

Heading for heavily symbolic, grotesquely biblical pastures for the last act, “Blindness” has thoroughly worn out its welcome, becoming a film of indulgence over something of significance. Even while Meirelles pumps in a few droplets of hope during the climax in a drastic effort to keep audiences from slitting their own throats on the way out of the theater, it doesn’t mask the fact that the movie is a discombobulated failure, hoping a few hastily arranged smiles might wash away 120 minutes of punishing perplexity. 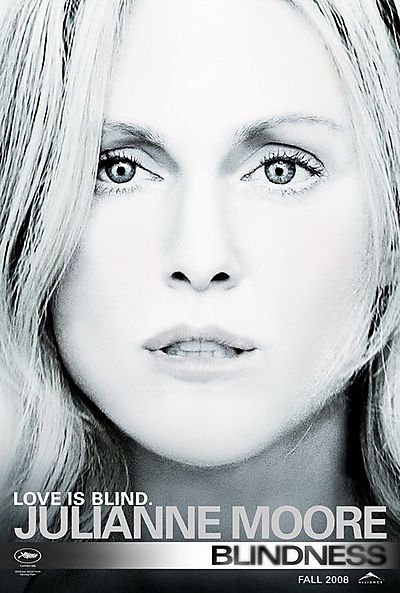