Home Archives Profile Subscribe
The Sunday Score: Gremlins (1984)
"Why are you laughing at me?"

DVD Review: Gunnin' for That #1 Spot

Leave it to a member of the Beastie Boys to create one of the best basketball documentaries around. Picking up where “Hoop Dreams” left off, “Gunnin’ for That #1 Spot” replaces solemnity with a streetwise perspective, examining the futures of eight high school basketball phenoms as they gather at the infamous Rucker Park neighborhood court to prove their highly trained mettle in front of an unforgiving crowd.

The event was the Elite 24 Hoops Classic, snatching top players (Kevin Love, Brandon Jennings, Tyreke Evans, Lance Stephenson, Donte Greene, Kyle Singler, Jerryd Bayless, and Michael Beasley) from the around the country and handing them a streetball challenge alien to their relaxed high school home court sensibilities. With only the cream of the crop invited to participate, director Adam Yauch headed to the four corners of America to meet the young men and gauge their aspirations for the legendary dream factory known as the NBA.

“Spot” doesn’t revolutionize the concept of young men aspiring to join the professional leagues. Instead the documentary reinvigorates the specific climb to perfection, spending the opening half of the film engaging the participants, showing off outstanding basketball skills, and prodding them about their future plans. As much as it is a story of basketball dreams, “Spot” is careful to examine the toxic climate of celebrity hounding hoop stars these days, with impulsive media types reaching as far back in age as they can get away with to spotlight talent for future branding. Of course, it’s an insidious practice based more on profit than professional regard, and “Spot” underlines the ease of seduction, especially with players trapped in unfortunate economic and domestic situations. The pressure on these kids to perform for their community can be extreme.

Surprisingly, “Spot” remains cheerful, communicating the respect the boys have for their guardians and how that love inspires them to improve their lives both on and off the court. While not every subject comes from an ideal background, the positivity in “Spot” is astounding, and lifts the film up, giving the screen eight young men worth rooting for; guys who believe in respect and selfless behavior without the repellent ego that traditionally gloms onto basketball players. Yauch zeroes in on this intrinsic humanity immediately, and it’s an enlightening twist in a common story of ambition.

The second half of “Spot” is devoted to the mythical Rucker Park game itself, and while Yauch pulls out masterful hip-hop tracks (from the likes of Jay-Z, MIA, and Nas) and a mosaic of breakbeats to back the action throughout the film, he transforms his movie into an exhilarating, unstoppable sports/music hybrid when the competition begins. Using low-tech visual devices exercised during his time with the Beastie Boys and directing the kaleidoscopic concert film “Awesome; I F**king Shot That!,” Yauch lends the game a pronounced infectious groove that powers the documentary all the way to the end credits. It’s not about what tracks are employed to fill the soundtrack, it’s how the filmmaker matches the beats to the dunks, speeds the footage back and forth, and finds wild angles to capture this unique event that makes the movie jump up and invite serious couch-based participation. Yauch makes this game feel electric with his endearing low-fi trickery.

The anamorphic widescreen image (1.85:1 aspect ratio) on “Spot” is a charming visual construct pulled from multiple video sources. Yauch loves to play with resolution and coloring, leaving the cinematography a grab bag of optical mischief, though nicely detailed, especially during the Rucker Park sequence. I experienced a couple pixelation pops, but overall the image is consistent and engaging.

The 5.1 Dolby Digital mix on “Spot” is a dynamic blend of bass-drenched music cuts and crowd atmospherics, nicely layered into a booming track that deserves to be played at top volume. Once the court action heats up, the mix launches in a massive way, and it’s fun to feel the beat while watching the magic basketball moves. A 2.0 mix is also available, containing a pleasing hip-hop bluntness.

English subtitles (with some inspired personality) are provided.

A feature-length audio commentary from director Adam Yauch and “Game MC” Bobbito Garcia (a marvelous, quick-witted announcer) is extremely conversational; the two participants share an easy chemistry, dissecting the onscreen action and revealing their personal history with the locations. Yauch provides the technical info (camera placement, locations, editing) with raspy enthusiasm, while Garcia brings thoughtful questions and the laughs. The guys are wonderful guides through the world of “Spot,” adding dimension to the film and offering the listeners a few hearty laughs.

“More Elite 24” (34:10) isolates the Rucker Park moves on each of the participants, lending the event more individuality than the documentary had time for.

“Beasley Trash Talk” (3:08) presents the uncensored taunts from player Michael Beasley during the Rucker Park game. I’m shocked the kid could find the breath to keep yammering away.

“Bobbitoisms” (1:00) is a single minute of Bobbito Garcia’s tourette-like reactions. Funny stuff. In a perfect world, Garcia would announce all sporting events.

“Deleted Scenes” (12:50) debates the NBA rule that prevents high school players from jumping into the pros at graduation, eavesdrops on a radio show plug for Elite 24, and discusses the importance of amateur basketball associations.

“NYC Video Diaries” (7:25) gathers the goofy home movies made by the players during their visit to the big city, from hand-held cameras provided by Yauch.

“Impromptu Dunk Contest” (3:03) captures the player is flight as they land impossible dunks.

“More Cookies” (106:50) contains odds and ends for the DVD supplement section (a potluck collection of footage), most centered on Yauch’s promotional tour and Bobbito’s opinions. The most valuable piece here is a two-on-two basketball contest between Yauch and Beasley. I’ll let you guess who wins.

And finally, a Theatrical Trailer for the film is provided on the DVD, along with a peek at the water-crisis documentary “Flow.”

While Rucker Park doesn’t quite fulfill the Thunderdome qualities as promised, the location is an iconic piece of New York, communicated with a supreme amount of love from Yauch to button an inspirational story of wish fulfillment. “Gunnin’ for That #1 Spot” provides the basics with foot-tapping, head-bobbing flamboyance, providing the viewer with a serious helping of heart, soul, and scorching basketball action blended up into a taut, explosive documentary. 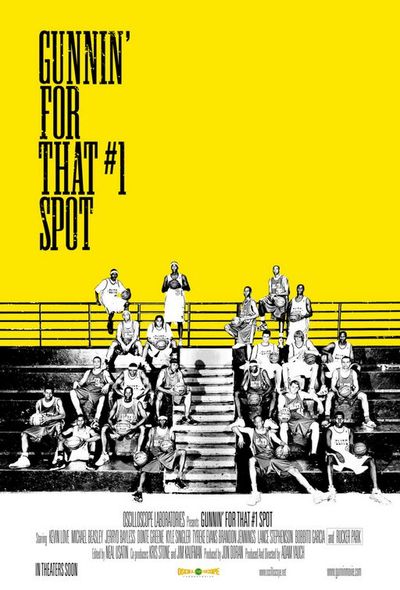