Finding an opportunity to prove her worth, Yella (Nina Hoss) is ready to move away from her glum Eastern neighborhood and the abuse of her husband Ben (Hinnerk Schonemann) to the West, where a job offer might bring her a sense of peace. With trouble shadowing her every footstep, Yella arrives at her destination only to find the job revoked, leaving her open to the charms of a solitary businessman named Philipp (Devid Striesow). Joining Philipp as he assembles shady business meetings, Yella becomes entwined in his life, finding the personal value she so desperately craves. However, with Ben reappearing ready to reclaim his lost bride, Yella is disturbed by her actions, leading to the ultimate question of self.

Directed by Christian Petzold, “Yella” clamps down on the viewer with a psychological hold that doesn’t immediately reveal itself. For classification purposes, it’s a mystery, sending the title character down a dark path of introspection and unbelievably bad luck, bearing silent witness to the manipulation that claws at her from all sides. Petzold maintain a bleak air of unease around the feature, slowly portioning out clues to Yella’s state of mind while rooting the film in German social symbolism, crafting a film that traces lightly instead of asserting itself through plastic thrills and spills.

It’s an interesting directorial effort, almost entirely hinged on Hoss’s lead work as Yella. Portraying the wide-eyed lady in question, Hoss doesn’t make Yella a quivering victim, preferring to stay inside a biological state of red alert. While the dialogue is kept at a minimum, the body language is deafening, with Hoss throwing herself into the spare role with a memorable display of suspicion and, ultimately, complacency. Hoss even manages to overcome the less structurally sound ideas from the screenplay, including a romantic interlude with Philipp that holds purpose inside the plot, but retains a nagging artificiality through Petzold’s direction, leaving Hoss alone to sell the emotional breakthrough. It’s a wonderful performance.

As matter start to unravel for the characters, Petzold introduces dark, forbidding tones, recalling early David Lynch efforts. With special attention paid to a dense sound design and shadowy articulation, “Yella” hits a few chilling notes of confusion before the end sorts matters out with unequivocal finality. It’s a not groundbreaking fate that Yella chooses for herself by the film’s conclusion, but it remains unsettling and appropriate, leaving the audience with an odd sense of peace after a solid, wholehearted serving of distress. 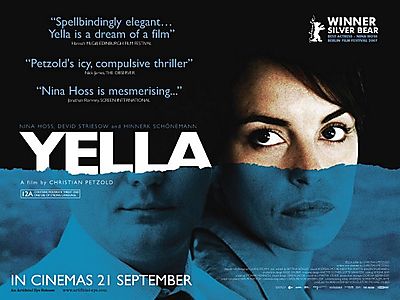