Toiling away in television for most of his career, “Towelhead” returns writer/director Alan Ball to the big screen, his first effort since winning the Academy Award for his 1999 screenplay, “American Beauty.” I’ll say this about Ball: the man loves his sexual discomfort. A domestic drama marked by every possible form of abuse, “Towelhead” is a familiar playground for Ball and his obsession with suburban decay, but remains sharply realized by the cast, who turn pure ugliness into an exhaustive psychological obstacle course.

A 13-year-old shy Lebanese girl, Jasira (Summer Bishil) has been sent away from her American mother (Maria Bello) to live with her strict father Rifat (Peter Macdissi) in a quaint Houston cul-de-sac as the first Gulf War rages on. Suffering mental abuse for most of her life, Jasira has found herself in a permanent state of self doubt, amplified by her introduction to puberty and all the humiliations that ensue. Suffering under the extreme discipline and contradictions of her father, Jasira has left herself open to the advances of predatory males, most notably Travis (Aaron Eckhart), an Army reservist neighbor who lusts after the trusting teenager. Hoping to come to terms with her newly revealed sexuality, Jasira is offered aid from Melina (Toni Collette), a pregnant, highly aware neighbor who observes the manipulation plaguing the frightened, curious young girl.

While guaranteed to offend many with its blunt observations of sexual abuse and jailbait depravity, “Towelhead” is quite skilled at evoking the singular pain of being a teen girl in America. Adapted from Alicia Erian’s 2005 novel, Ball’s film is an extraordinary map of adolescent faults and indoctrinations, funneled into the character of Jasira, who’s put through a ringer of mortifying situations as she glumly crosses the line from carefree, naive kid to a burgeoning woman, setting off lust detectors everywhere she goes.

As seen in “American Beauty,” Ball is a gifted salesman of torment. Perhaps his approach can be highly theatrical, but “Towelhead” is a shining example of extreme moviegoing uneasiness, with Jasira’s mistakes paving the road to hell. A beautiful girl who looks far older than her years, Jasira is attacked from all sides: decoding her brand spankin’ new menstrual cycle, avoiding the shame emanating from her father, and withstanding the torment of her skin color during a time of extreme American patriotism and bigotry. Bishil’s performance handles the onslaught of malice with care for Jasira’s childlike soul, making sure to reinforce the character’s curiosity with her body to match the eventual perversion of her innocence. It’s a potent blend of disgust and sympathy that “Towelhead” is banking on. Ball knows how to push buttons, but thank heavens Bishil lends a confident, nuanced touch to the screenplay, keeping the horrors at an adequate distance.

The entire cast is game to meet Ball’s caustic intent, observed in Macdissi’s Herculean effort as the enraged, disgusted Rifat and Eckhart’s lecherous Travis; he embodies the picture’s sleaziest tendencies as the adult who isn’t the first to cross the line with Jasira, but the one that shatters her innocence with the most direct submission of cruelty. Eckhart toys with the character’s controversial pathology to stunning results, shifting uncomfortably around the frame like a predator stalking easy prey.

Covering concentrated social, political, racial (the heat is turned up further when Jasira takes on a manipulative African-American boyfriend), and domestic disturbances, “Towelhead” provokes with accomplishment, goosing the viewer with terrifying situations of violation, but the film fails to feel out a larger picture. Supporting characters, notably Melina and her liberal passes at sex education, are presented with choppy, unfinished results. It leaves a gap in Jasira’s world, amplified the more Ball leans toward a cinematic helping of hysterical catharsis for the conclusion.

“Towelhead” is perhaps best saved for a more hardened filmgoer; Jasira’s sexual freefall is filled with unsavory behavior and scarring results, and Ball’s purpose might get lost in the mix. It’s a memorable picture, but not a lasting one, passing a grander sense of importance to wallow in the muck. The muck is incredible, but through an episodic, half-realize presentation, it starts to feel sensationalized rather than insightful. 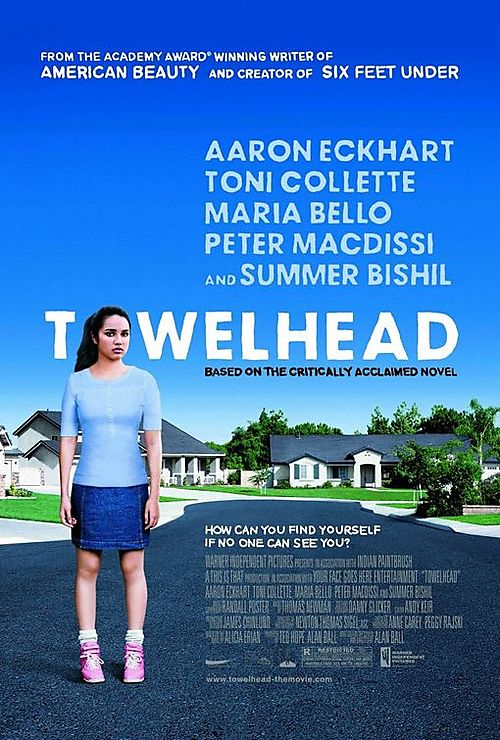