With this impressive collection of actresses and production duties handled by the renowned Diane English, it’s a crushing disappointment to find the latest update of the famed play “The Women” a defanged, broad ode to one-dimensional empowerment. The performances shine, but the rest of this mediocre travelogue of feminine foibles is given the blunt-force treatment, draining the material of deserved big-screen acidity.

When gossip concerning her husband’s infidelity leads to Mary’s (Meg Ryan) doorstep, she panics, unable to process this violation of trust during a period of time where she also loses her job and the admiration of her teen daughter. Coming to the rescue are her friends, fashion magazine editor Sylvia (Annette Bening), full-time mom Edith (Debra Messing), and full-time lesbian Miriam (Jada Pinkett Smith), not to mention further support from housekeeper Maggie (Cloris Leachman) and mother Catherine (Candice Bergen). While struggling with their own disappointments in life, the ladies team up to help Mary through this difficult time, turning their venom on Crystal (Eva Mendes, vamping it up), the formidable mistress who won’t back down from the affair.

An amalgamation of the 1936 play by Clare Boothe Luce and the classic 1939 feature film from director George Cukor, this modern take on age-old questions of loyalty and the toxicity of cattiness is hoping to compete in a “Sex and the City” world of women dominated by labels, liquor, and lascivious behavior. From the outside, English, the creator of the iconic television comedy “Murphy Brown,” is the perfect match for the heady material. After all, who better to tackle a tale of female worry with an all-female cast (only one man is allowed here) than a lauded professional with extensive experience probing the female mind?

As inspiring as her gifts are, English is lacking a deep-seated knowledge of motion picture timing and execution. “The Women” feels slack and pushy with its themes, written more as a sitcom than as an epic narrative of companionship and Manhattan-bred, high-society anxiety. English loves her characters, each woman representing a certain shade of femininity, but there’s little consistency to the story, which springs back and forth from a screwball comedy to weighty drama, exploring the difficulty of marriage maintenance, the dangerous self-esteem issues facing women today, and the thin-ice dance of lifelong bonding. Meeting the demands of the Cukor film, her own modernization subplots, and the need to invent a world for these characters, distracts English from an organized screenplay, which often resorts to light sermonizing to cross off the bullet points she wants to cover. It leaves little room for appealing tartness to stroll in and lift the picture off the ground.

While not written as a free-for-all acting battle royal, English casts her feature beautifully, with every member of the ensemble at least attempting to muscle their way into the action. Actresses like Pinkett Smith try too hard to make an impression (her slouched lesbo stance screams incompetence), while stars such as Ryan and Bening carefully ace their roles. Playing the fashion queen fearing her age is leaving her ego vulnerable to a youthful revolt at her magazine, Bening seems almost a caricature of the Samantha Jones mentality at first (English introduces the character comedically as a Saks Fifth Avenue cyborg, complete with robot vision), but the performance relaxes during the film, and Bening plays the comedy and soul with generous quirk.

Meg Ryan is the unofficial star of “Women,” taking on the sympathy of the script while assuming the audience’s role as the confused spectator to emotional disaster. Here’s a phrase I haven’t used since the 1990s: Ryan delivers a knockout performance. She hits both areas of physical comedy and domestic distress with lovely timing she hasn’t embraced in years. English deserves kudos for this unexpected note of casting success.

Unlike the diseased nonsense of “Sex and the City,” “The Women” has a few important issues it wants to discuss between moments of females getting gushy over handbags and holding low opinions of men. That counts for something in this newly-minted genre. Still, English isn’t confident behind the camera, and while her picture sparkles with New York majesty, fashion accessories, and a game cast, “The Women” never achieves a healthy level of playfulness or profundity, trapped in a void of mediocrity no quantity of star-powered estrogen can salvage. 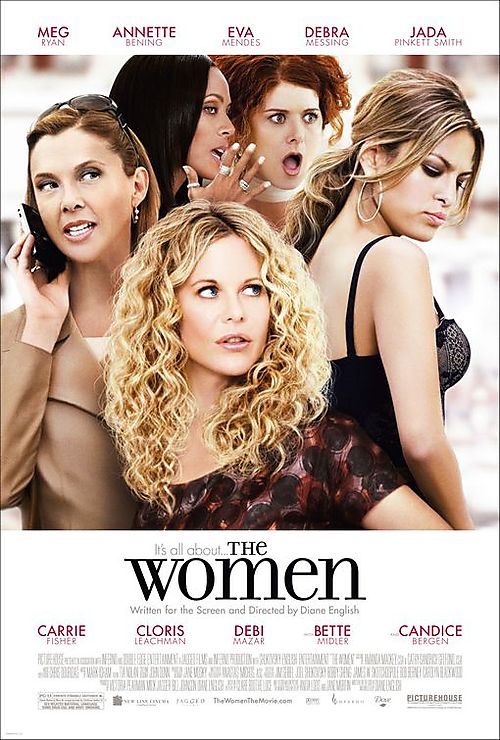